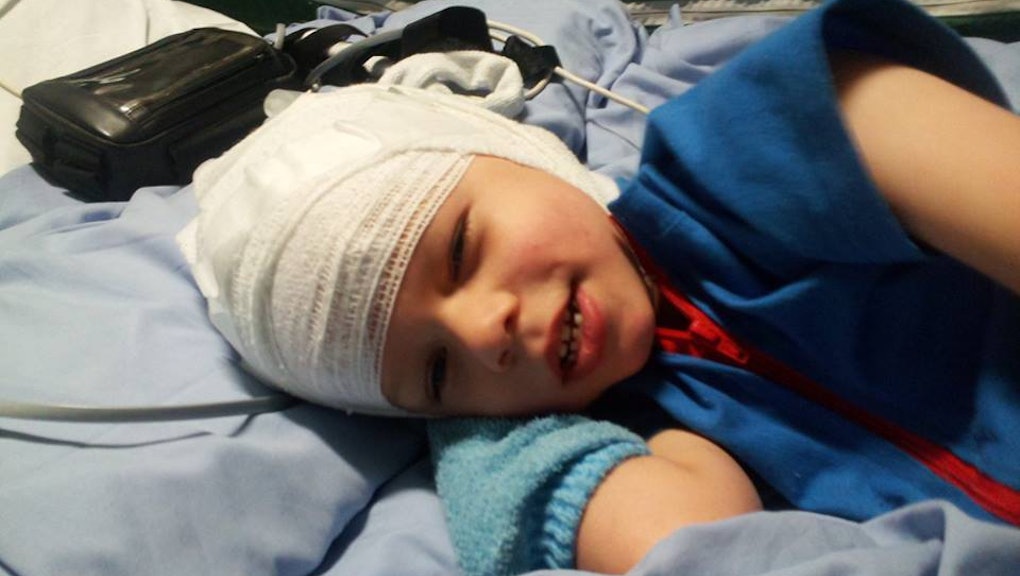 Suffering from autism and a rare congenital disorder, 5-year-old Zander Welton had the motor functions of an infant. He had seizures every few days and communicated with his parents through grunts and squeals. No medications — not even two brain surgeries — managed to appreciably improve his condition. Skeptically, Zander’s parents turned to medical marijuana as a last resort. The results were dramatic. His seizures almost completely stopped, and though unable to even walk unsupported just a few months ago, he is now on the verge of being able to run.

But even though medical marijuana is legal in the Weltons’ home state of Arizona, some state officials still consider the use of marijuana extracts to be a punishable offense. Fearing criminal reprisal, Zander’s parents stopped giving him his original medication, an oil infused with the drug, which was easier to administer than the dried plant. Since marijuana in its leaf form is difficult for the boy to swallow, it is now difficult to adequately medicate him. There is a blurry line between “drugs” and “medicine,” and as Zander’s story shows, getting the distinction wrong has huge human consequences. Government officials' are attempting to walk this line while crafting new drug policies. But, as Zander's story shows, they've yet to find a sensible solution.

Marijuana is not the only drug with medicinal properties: Methamphetamine is approved in the United States to treat ADHD and obesity; cocaine can serve as a local anesthetic; and heroin is an opioid, a class of drugs that includes common pain medications such as oxycodone. These substances routinely improve the lives of millions of people during medical procedures, and help those who suffer from chronic pain.

But these medications, like their illegal forms, carry risks. Opioid addiction, for instance, is a burgeoning public health problem in the country. Sales of these prescription painkillers have exploded, and are now four times greater than in 1999. Highly addictive and potentially lethal, legal opioids are involved in over 40% of poisoning deaths, which are the leading cause of accidental fatalities in the United States. Experts also believe that increased consumption of painkillers has fueled a huge spike in illegal opioids. Some 80% of heroin users have previously abused painkillers.

In light of these issues, policymakers must balance two delicate, often conflicting, goals: facilitating access to medications for those who need them, while controlling access to those who do not. Zander’s story is a painful reminder of the consequences of unnecessary restrictions on life-saving substances. On the other end of the spectrum, a lax prescription system allows an estimated 12 million people a year to abuse painkillers.

Striking this balance often becomes a political struggle. Though experts consider lenient prescription requirements to be responsible for the dramatic rise in painkiller abuse, even the most minimal regulations face the well-financed opposition of pharmaceutical companies and pharmacy chains. In Arizona, officials’ hardline position on drugs has likewise gotten in the way of good policy.

Another factor in this issue is the non-comparability of benefits. That is to say, the people who suffer from drug restrictions generally are not those who suffer from drug addictions. For example, a new plan by the Food and Drug Administration reduces the amount of painkillers that doctors can prescribe and requires patients to physically bring their prescriptions to drug stores, rather than physicians phoning them in. This will hopefully curtail abuse, but it also represents a serious obstacle to obtaining medications for those who have limited access to doctors, like people in rural areas, or those who have poor mobility, like the elderly.

Obviously, the public health consequences of a policy that is too lax or too restrictive depends on the substance in question. In Zander’s case, approving medicinal marijuana extracts confers obvious benefits and is unlikely to lead to significant abuse. But the fact remains that the world of drug policy is full of hard choices and passionate responses. For Zander’s sake — as well as the millions of people who suffer from medical and addiction issues — common sense, pragmatic solutions are sorely needed.