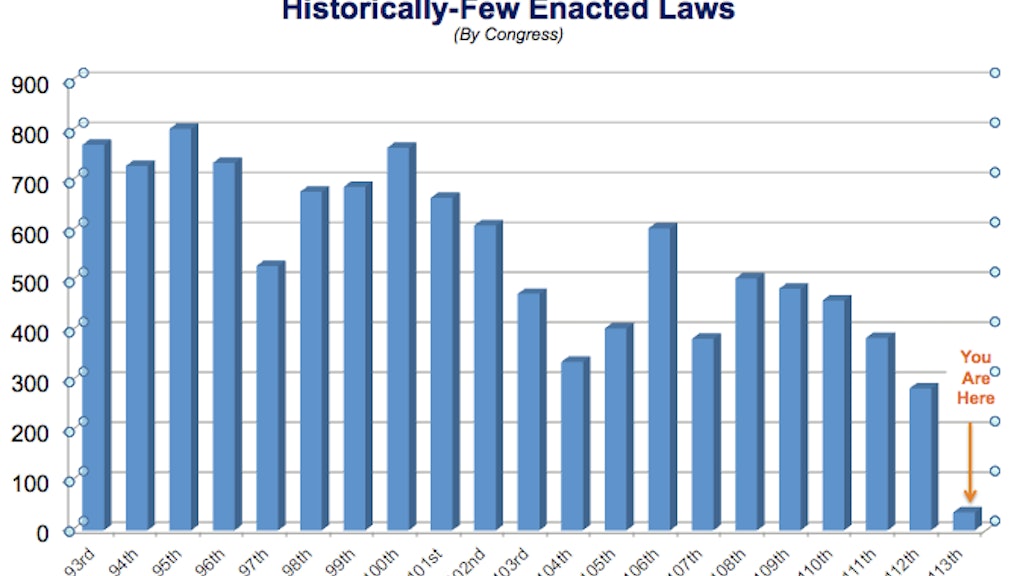 You can look at the above graph one of two ways:

1 - That Congress is shying away from big government. By NOT passing any bills, Congress is not creating more complex bureaucratic red tape, thus allowing more economic and social freedom in America. This is the current Republican attitude, and one that was voiced by Speaker of the House John Boehner (R-Ohio), when he said in July that we should judge Congress by how many laws it repeals, not passes.

2- Or you can see this graph as the complete and utter breakdown of American governing. Nothing is getting done.

But does output even matter?

Americans seem to think so. They want Congress to get things done, not get things undone.

Meanwhile, the unfavorable rating of the Tea Party — the conservative sect of Congress that many consider to be the root of inefficiency — has doubled since 2010.

The Washington Post's Ezra Klein has called this Congress a "train wreck." But is this Congress just responding to the will of American opinion? The Tea Party claims it is trying to end the out-of-control spending of government, and create a more accountable government. This is in-line with the goals of many Americans. Earlier this year Americans' concerns about the federal budget deficit rose high enough in January to knock unemployment out of the top two slots on Gallup's "most important problem" list for the first time since 2009.

Maybe what the Tea Party is doing is just reactionary. Americans wanted this all along.

Regardless if you accept view No. 1 or view No. 2, the graph above perfectly sums up the character of America's current governing body. This is the Congress we've created. The next election will show if Americans have the political equivalent of buyer's remorse.

Editor's Note: This story has been updated to remove language that was used without attribution to the Washington Post and Wikipedia. We apologize to our readers for this violation of our basic editorial standards. Mic has put in place new mechanisms, including plagiarism detection software, to ensure that this does not happen in the future.