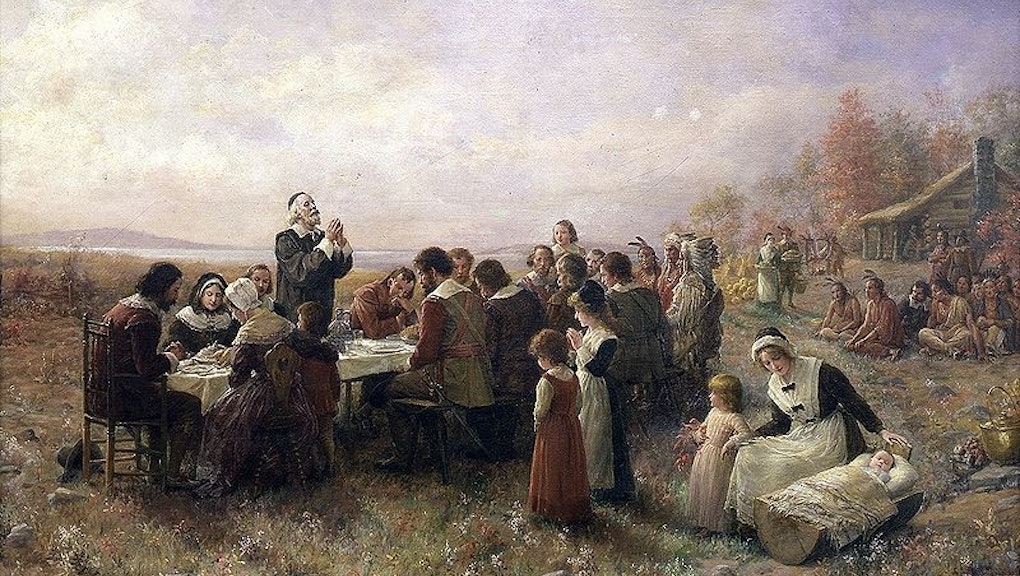 An Open Letter to the Businesses Ruining Thanksgiving

Believe it or not, Thanksgiving, which is celebrated in the United States and Canada, is still kicking strong. However, as the years go by, society is becoming more and more indifferent to this sacrosant fall holiday.

My mother and father taught me that the progression of fall holidays goes Halloween, Thanksgiving, and then Christmas. I may be a 23-year-old whose experience in the world is rather limited, but did I miss the memo allowing shopping malls, supermarkets, and other places of business to skip the Thanksgiving holiday?

I have been increasingly vexed over the past few years when I start seeing "Seasons Greetings" banners hanging from my local supermarket before even taking off my Halloween costume. To add insult to injury, companies have begun to run their Christmas commercials almost a full month earlier than in previous years. This past year, retail store Kmart took advertising to a whole new level when it aired its first holiday ad on Sept. 9. Honestly, who wants to see Coca Cola's polar bears with the Beach Boys playing in the background before the Thanksgiving Day Parade, which used to mark the Christmas season's official start? Until that time, any business that runs Christmas advertisements or puts up decorations earns a spot on my "naughty list," which regrettably seems to be getting longer every year.

So my personal thanks go to Nordstrom for officially declaring they will not put up Christmas decorations until after Thanksgiving. That business knows how to keep the Christmas magic alive — by fighting the good and noble fight against cross-holidization. When companies continue to push the boundaries and blur the lines between our holidays, it just a fuels a society that is becoming increasingly fast-paced, as well as more and more consumer-driven.

Yes, companies do have the right to advertise whatever and whenever they want. However, why not pique the consumers' interest by advertising about Thanksgiving? One of my favorite commercials that airs in Florida involves a family sitting down for Thanksgiving dinner and the salt and pepper shakers are alive at the table. The salt and pepper shakers are dressed as pilgrims from the Mayflower and magically come alive as the family interacts over its Thanksgiving dinner. Publix, the Southern grocery-store chain that airs this advertisement, should resurrect it as a tribute to the merits of the Thanksgiving holiday.

Thanksgiving is a holiday to be spent with family (and possibly watching football). Just because the commercial world wants to pillage the Christmas sentiment, does not mean that we as a collective society should overlook Thanksgiving. For all you devoted Christmas lovers out there who are chewing your pillow apart in disgust at my argument, consider this quote from A Charlie Brown Christmas: "We all know Christmas is a big commercial racket. It's run by a big Eastern syndicate, you know?"

Let's not fuel the fire of a commercialized holiday season that seems to be creeping closer and closer to Halloween as each year goes by. Thanksgiving does not need to be just another day on the calendar that society has to casually check off before we are consumed by the hustle and bustle of Christmastime. Instead, Americans should take the month of November to slow down and reflect on the spirit of Thanksgiving by giving thanks for the blessings of the past year, and reflecting on the hardships that we as individuals had to overcome to make it to the fall's most important holiday.