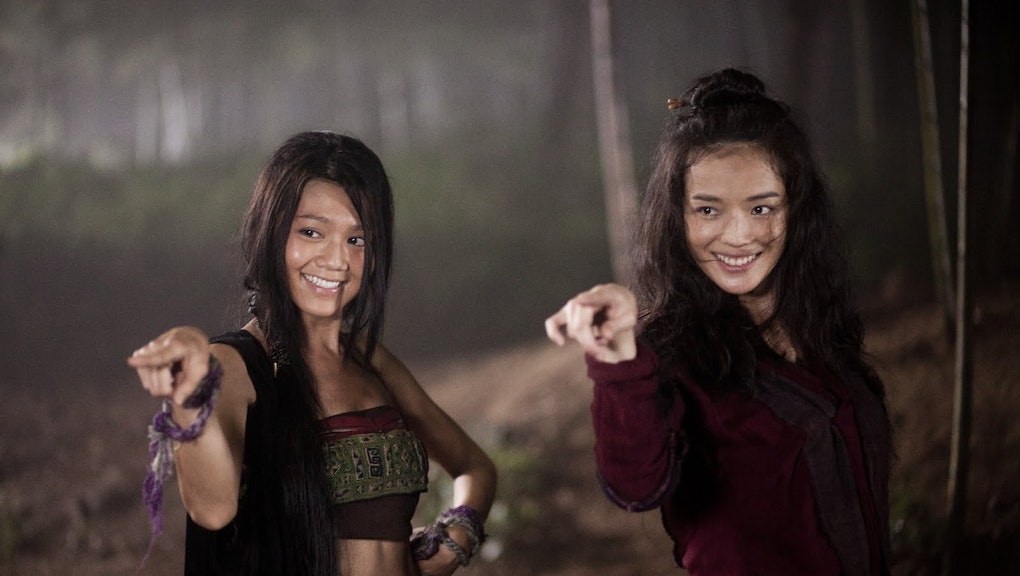 For Once, China's Most Popular Movie of the Year Was Not American

With the potential for billions and new screens built every day, China's market is coveted by American movie-makers. So far, Hollywood's product seems unbeatable. As regulations on international film lift, Chinese moviegoers are drawn to big-budget American movies, like Avatar, Iron Man 3, and Transformers.

Hollywood believes that China will continue to choose American-made movies over local creative product, assuming that Chinese studios churn out inferior knock-offs. But American film too often resembles its own stereotype of Chinese industry: formulaic, flashy, and stale. In September, Variety published a warning to Hollywood: the Chinese markets experienced a nearly 150% increase in local ticket sales, while imported film ticket sales dropped in the same market. Hollywood's position may be more precarious than it believes.

This year, Stephen Chow's Journey to the West: Conquering the Demons showcased the excitement of China's mass-market movie-making. Its huge success undermines Western assumptions about China's lack of creative energy. This sprawling, unruly fantasy-epic isn't a knock-off of a Hollywood film — it's a mashup of three Chinese genres: martial-arts action, a Hong-Kong genre of humor called mo lei tau, and historical-fantasy steeped in Chinese mythology. It's making billions.

For the average Westerner, Hong Kong cinema is nearly synonymous with the martial-arts action movies it popularized in the 70s. Western audiences, accustomed to thuggish shootouts and brawls, were dazzled by the acrobatic grace and highly-stylized fight sequences of Hong Kong action movies. Journey to the West has enough elaborate choreography to please an aficionado, but is savvy enough about the form to innovate within it. Chow plays with a vast stockpile of tropes, clichés, and stereotypes: buffoonish master, endlessly deferential student, household-object-as-improvised-weapon. In his work, the thrill of action exists side-by-side with the pleasure of parody.

The film's cartoonish gags invite comparisons to Looney Tunes or Charlie Chaplin. But Journey to the West's humor requires explanation beyond Western allusions. It's a distinctly Hong Kong genre, mo lei tau, which translates as "says nothing" or "nonsense." Just as screwball comedy in its heyday let Americans escape the uncertainty of Depression-era lives, mo lei tau lets people laugh at small-scale absurdities as an outlet for their frustrations with absurdities of more serious import.

Energized by locally-developed genres of action and humor, Chow's latest film takes on a familiar plot. Journey to the West, a classic work of Chinese literature, narrates the pilgrimage of a Buddhist monk and his sidekicks, including the trickster Monkey King. A long history of adaptation on screen and stage makes it familiar to any Chinese schoolchild.

For years, such traditional literature supplied the only possible plots to mainland China's movies, meant to indoctrinate viewers with patriotic fervor. The quality of the films mattered little. Consider Mao's wife Jiang Qing, Director of Cultural Production, watching Hollywood movies in her private cinema as the masses endured stiffly-acted tales of dutiful heroes and patriotic martyrs. But Chow chose to reinvent a classic tale so that his audience could have a shared framework for his punchlines. The film winks at the ancient tales rather than trying to shape them into instructions for righteous behavior.

A Western industry still eager to dominate the global entertainment market might be tempted to reduce the success of Journey to the West to nationalist sentiment. But the failure of state-produced films rebuts this notion. In 2010, the Chinese government stopped playing Avatar in theatres nation-wide to encourage viewership for the state-produced Confucius, a biopic about the unfailing wisdom and moral uprightness of the philosopher. This switch-up exacerbated, but was not the only cause of, the widespread dislike for the film: unfailing wisdom was apparently not riveting to viewers.

Irritation at the government's pushiness proved that the Chinese movie-going public no longer accepted the state's decisions about what was on the screen. But Chinese movie viewers don't want to be patronized by Hollywood any more than they want to be lectured by their government. They want to watch something that will entertain them. As the state loosens up, Chinese citizens won't just have greater freedom to watch Hollywood, they will have greater freedom to define their own cultural products.

On Hollywood's part, there have been few attempts to understand what Chinese audiences really want. Approaches to the Chinese market has been clumsy at best, offensive at worst. Iron Man 3 filmed a scene of Chinese heroism — meant to screen only in Chinese theatres. The scene irked Chinese media, who recognized it as pandering. Chinese moviegoers were equally irritated by 2012's homage to China, a throwaway line describing something "only China could build," referencing the stereotype of China as the holy land of cheap, brainless labor.

Despite these missteps, Hollywood's competence and experience have generally pleased Chinese viewers. But Chow and his ilk are poised to do better, grounding their work in a genuine understanding of what China wants. Variety's review praises Journey to the West's visual flair, but declares it, politely, too insane for American audiences. The team behind the film shouldn't lose sleep over it. With an ever-expanding Chinese audience to look out for, the tastes and interest of the West may be beside the point.