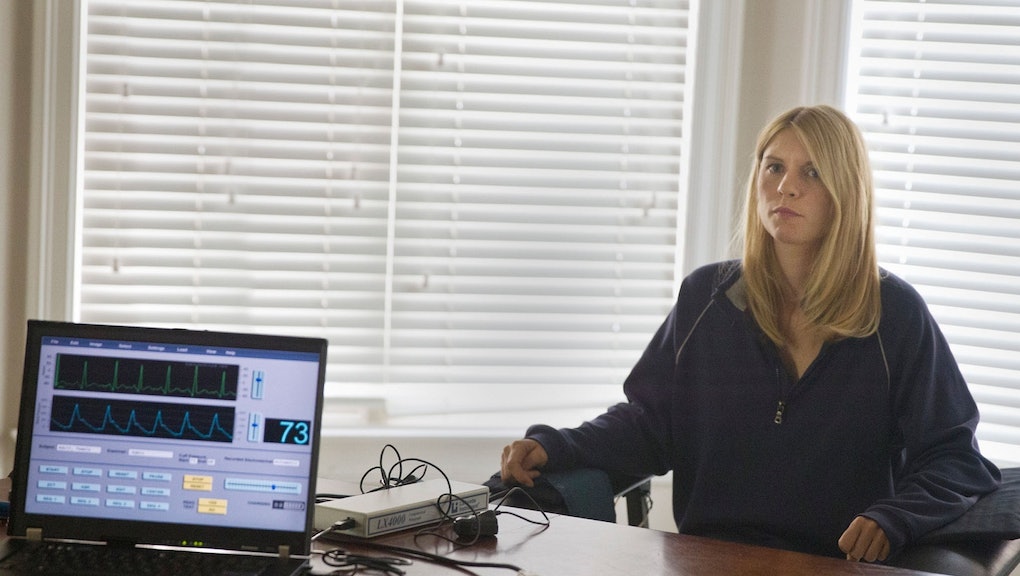 The title "Still Positive," while referring to the craziest moment this season (and the subject of the weekly crazy Carrie moment), is not the most suitable for Season 3, Episode 6. Yeah, the scene it refers to smacks us out of nowhere, and it is probably what many viewers will fixate on, despite the scene not having much to do with anything immediate, but a far more pertinent title would be "Hard Punch."

Besides sounding way cooler, it would serve the purpose of tying up the entirety of the episode in a neat little theme. From the verbal hard punches served by Carrie confronting Javadi, to Dar Adal and Senator Lockhart's agreement to restore the CIA to its former (feared) glory, to Javadi going postal and forcing Saul to get physical with him, this episode is seething with all sorts of metaphorical and physical "punches." And yeah, that creepy collection of pregnancy tests is certainly a "hard punch."

Our old Homeland buddy, Lie Detector, makes a brief appearance in the episode's opening scene where Carrie is hooked up to the detector across from Javadi in a room with two armed men of whom Carrie wants to be rid. Intentionally or not, Carrie's heart rate goes up enough to convince Javadi that his men are indeed making her nervous and messing with the test. Once they are alone, Carrie confronts Javadi about his embezzlement and tells him he is out-manned and outgunned. The only option he has is to meet with Saul.

Javadi, mostly unfazed, is more dissatisfied with Saul's "disrespect" of him. Slowly, the goofy, burger-spilling cartoon villain is transforming into a veritable enemy. He refuses to go to Saul right away as it will arouse his men's suspicion. He agrees to follow Carrie's proposal and meet later in the day at a specific location.

A cozy new team is assembled to monitor Javadi's activities in a CIA safe house: Fara, Virgil's brother Max, Quinn, Carrie, and Saul. Why Max and not Virgil himself? Likely Virgil is knee-deep in freelancing because there is no way that Max was the default choice: he still acts like a pimply 13-year-old around the opposite sex, nervously saying "hi" to Fara as he sits beside her. How is this man-child fit for a team set to track down and turn the CIA's number one target?

At the safe house, Saul details to Fara how Javadi got on the Iranian government's good side in the late 70s: by killing four agents Saul recruited in Iran after promising Saul he would provide them refuge until they were able to escape to the U.S.

All right! More reasons to see how much of a sneaky weasel Javadi really is. A few more, and we'll be golden.

Let's step aside for a moment for a brief side-plot interruption. That whole thing with Mira wanting Saul to elicit some sort of reaction to having her new lover over for dinner the night before? Oddly reminiscent of when Quagmire slept with Cleveland's wife in Family Guy: Lorreta wanted an emotional response from Cleveland instead of his usual passive detachment. And Dana's name change? That should have happened before she tried to off herself in the tub.

And now for this episode's namesake scene, and this week's segment of …

What Crazy Thing Did Carrie Do This Week?

Testing positive on a pregnancy test, looking at it with enough indifference to make it creepy, and then opening a sink drawer and placing in on a neatly-stacked row of pregnancy tests.

Let's put aside the over-exhaustive question of who's baby is it anyway (the writers are going to try and throw us off either way) and focus on several other vital inquiries: is her perpetually missing baby bump due to her steady diet of tequila? Does she just rip the condom off every guy she hooks up with? Most importantly, why the hell is she she playing Jenga with positive pregnancy tests?

Adal, as always, falls on the more sinister side of the CIA spectrum in this episode. He and Lockhart circle-jerk over the vision of resurrecting the CIA into the fear-inducing organization it used to be. Adal, overexcited at the prospect of being part of the CIA he grew up with, even lies to Saul about what he and Lockhart discussed.

Remember that ridiculous burger-stain scene from the last episode? It may very likely not be a simple Kramer moment, but a clever foreshadowing of a much more harrowing stain Javadi acquires this episode. Especially since he got that burger-stain while watching his ex-wife and grandson in episode 5. It still doesn't excuse his dull passivity and goofy acting, but these troughs are almost forgotten in the next scene, as he forgoes his meeting Carrie in favor of driving over to his ex-wife's house.

Saul, upon learning where Javadi is actually going, desperately tells Carrie and Quinn to hurry and get to Javadi.

While Saul asserted earlier in this episode that this is not a mission of vengeance, it is most definitely driven in part by guilt for the four dead agents.

The guilt will have to persist because Javadi, upon greeting his daughter-in-law with a friendly smile and a silenced bullet to the head, proceeds to meet his grandson before smashing a bottle and stabbing his ex-wife in the neck multiple times.

Carrie and Quinn finally arrive and take him to the safe house's interrogation room.

Saul's guilt only accumulates with the deaths of people under his care, and he begins detaching from his emotions even further. Javadi might just be the perfect outlet for his frustration. Breaking Javadi's nose in the interrogation room, Saul raises serious doubts whether this mission really isn't about vengeance.

How far will Saul go? Will he finally crack? All we know for certain is that Saul is spiraling into the most fascinating character on the show.