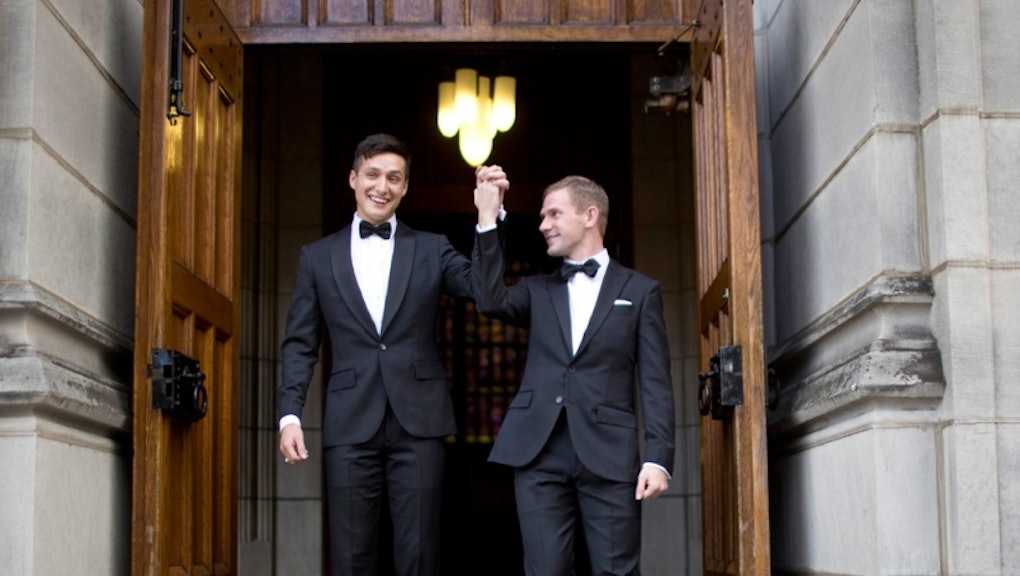 On Saturday, Larry Choate III and Daniel Lennox made history when they became the first gay male couple to get married at the U.S. Military Academy's Cadet Chapel in West Point, N.Y. The ridiculously photogenic husbands' wedding marks another triumph in the march toward marriage equality. As Choate told the Associated Press, "It's maybe one more barrier that's pushed over a little bit, or maybe one more glass ceiling that's shattered that makes it easier for the next couple."

As popular support for gay marriage swells, it's worth taking a moment to step back to consider the recently toppled barriers and shattered ceilings that made Choate and Lennox's momentous nuptials — and dapper-as-all-get-out wedding photos — possible. A little more than two years ago, gay military couples couldn't so much as mention their relationships, let alone get married on the hallowed grounds of West Point's chapel.

When the accomplished couple attended the military academy (Lennox graduated in 2007 and Choate in 2009), "don't ask, don't tell" — the policy that forbade gay, lesbian, and bisexual members of the military from disclosing their sexual orientation — was still in full effect. It wouldn't be struck down until 2011, around the same time that after years of lawsuits and legislative gridlock, gay marriage was legalized in New York State.

However, even after those tremendous milestones, married gay couples were still barred from receiving benefits afforded to their straight counterparts, making it more difficult, and less beneficial, for them to wed. Even in December, when Penelope Gnesin and Brenda Sue Fulton became the first lesbian couple to be married in the Cadet Chapel, the two were restricted from applying for housing assistance, health care benefits, and education subsidies.

That didn't change until June, when the Supreme Court found sections of the Defense of Marriage Act (DOMA) to be unconstitutional, making federal benefits available to homosexual married couples. That included, as of September, members of the military. The DOMA ruling is also fuelling state-level efforts to legalize gay marriage across the country.

Which brings us to today. Gay marriage isn't a panacea that will cure all the ills facing the LGBT community, from workplace discrimination to teenage homelessness to transgender harassment. It is, however, a foundational civil rights issue that has led to a sea change in public opinion, opening the door for further gains in equality  — and, importantly, ever more dashing wedding photos.