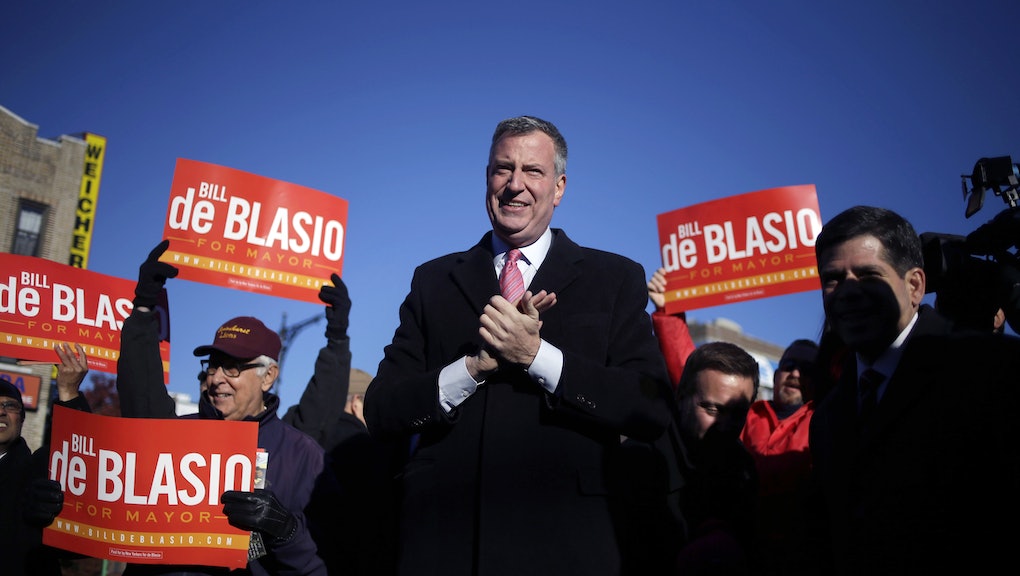 On Monday morning, the New York Post confronted New York City's eight million residents with shocking photographic evidence that could change the tide of Tuesday's mayoral election. According to the newspaper's cover story, which is illustrated with a giant cutout of Democrat Bill de Blasio's head and a clip art hammer and sickle, the mayoral candidate may be some kind of commie pinko bastard bedwetter.

The Post's red scare should make readers question their support for de Blasio, and additionally ask whether the Post knows which year, decade, and century we're in.

The revelation is based on de Blasio's school trip to the Soviet Union in 1983, back when he was an undergraduate at New York University and the USSR still existed. It was, as the Post breathlessly reports, "the same year that President Ronald Reagan referred to the country's regime as 'The Evil Empire.'"

The article goes on to cite de Blasio's honeymoon in Cuba, and his 1988 visit to Nicaragua "in support of the Marxist Sandanistas," the leftist group that ruled the Central American country throughout the 1980s despite Oliver North's best efforts. A brazen statement released by de Blasio's campaign not only acknowledged that the candidate has visited foreign countries, but states that he's gone so far as to travel to Spain, Israel, and even Senegal. You heard that right, ladies and gentlemen: Senegal.

Clearly, de Blasio must be stopped before he can go on vacation again. The Post is right to bring the candidate's serious transgressions to light, and is clearly not making a last-ditch effort to reduce the 40-point lead that de Blasio has over their favored candidate, Republican and stalwart non-communist Joe Lhota.

It goes without saying that when someone visits a country, they do so in support of every element of that nation's present regime, or of its most insidious political groups. If de Blasio traveled to the USSR, Cuba, and Nicaragua, he's clearly a dyed-in-the-wool communist. The fact that he visited Spain points to de Blasio's support of Basque terrorist-separatist group Euskadi Ta Askatasuna (ETA), and de Blasio's trip to Israel implies that he might secretly be working for Mossad. At press time, it wasn't immediately apparent what de Blasio's trip to Senegal means about his political allegiances (the country does support a lot of UN peacekeeping operations). We can only hope that his Senegalese espionage work somehow involves musician Youssou N'dour.

Worryingly, the Post's implication — that visiting a country constitutes absolute and undying support for every element of its political and economic systems — seems to condemn a number of other prominent American politicians. What was President Richard Nixon's 1972 visit to China other than a declaration of support for Maoist purges? And what are we to make of Reagan's 1988 trip to Moscow, the capital of The Evil Empire itself? It looks like the communist infiltration of our government goes even deeper than the Post suggests.