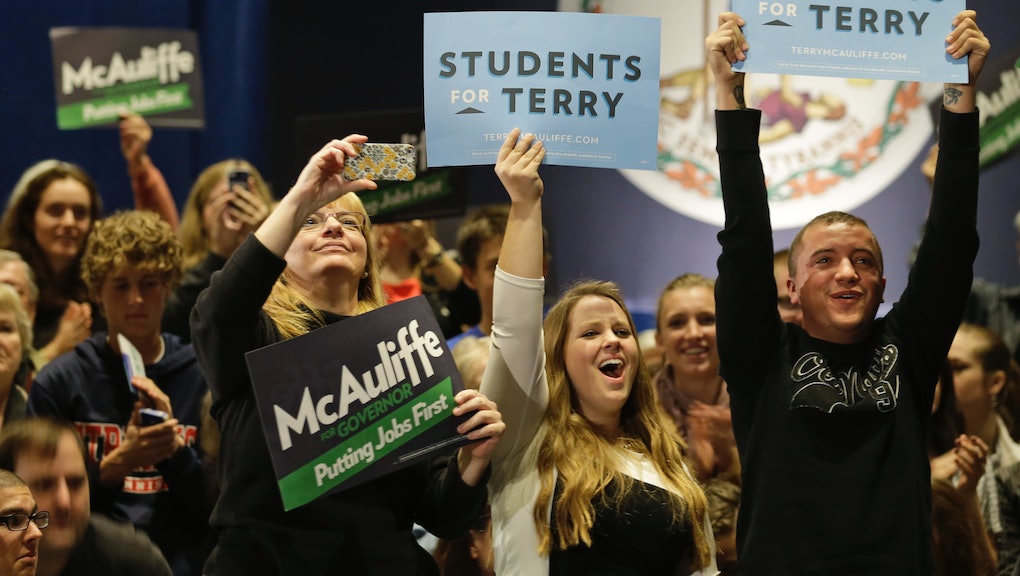 On Tuesday, voters in Virginia will decide whether former Democratic National Committee Chairman Terry McAuliffe or state Attorney General (and Tea Party favorite) Ken Cuccinelli will be the state’s next governor. With a six-point lead over his GOP adversary as of Monday, McAuliffe is largely expected to win.

Many factors contribute to Cuccinelli’s less-than-stellar ratings among voters, but McAuliffe clearly benefits from a massive fundraising advantage. According to the Virginia Public Access Project, McAuliffe’s campaign has raised over $34 million since 2012. In comparison, deeply conservative Cuccinelli has raised just $19.2 million from various Republican organizations and energy companies.

Although Cuccinelli is unpopular among young voters, women, and minorities, he is a shining star to the coal industry. Cuccinelli has long been an advocate for the state’s coal mining operations. Just last week, the GOP candidate spoke at a pro-coal rally on Capitol Hill to openly criticize President Obama and the Environmental Protection Agency’s (EPA) new regulations on carbon emissions, or the so-called “war on coal.” McAuliffe, on the other hand, has stated that he does not want to see another coal-fired plant built in Virginia.

The GOP candidate has equated the EPA’s new carbon limits with a war on the state’s most vulnerable citizens. “In Virginia, the war on coal is a war on our poor. It’s a war on our middle class,” Cuccinelli said at the pro-coal rally. “It’s a war on opportunity itself.”

However, while Cuccinelli presents himself as a defender of the downtrodden, his pro-coal stance may reflect the special interests of energy giants more than the concerns of coal workers in southwest Virginia.

It’s clear that Cuccinelli has the support of large energy companies, but what about the people who actually work and live in Virginia’s coal country?

Clearly, the EPA’s carbon regulations on new coal-powered plants are not good for the coal industry in Virginia. But coal mining in Virginia has steadily decreased over the past two decades, primarily due to dwindling coal reserves. In fact, the number of people directly employed in Virginia coal mining has dropped from 10,600 in 1990 to 4,713 just last year.

Cuccinelli’s fight against EPA carbon limits may simply prolong the coal industry’s inevitable decline. Whether this pro-coal stance can be effective in helping coal workers is therefore unclear. What is clear is that coal is less and less an important economic interest for Virginia.

In spite of the coal industry’s significant contributions to Cuccinelli’s gubernatorial campaign, voters seem poised to elect his Democratic opponent as the state’s next governor.

McAuliffe's superior finances have no doubt contributed to the candidate's polling numbers. Yet regardless of whether McAuliffe's win is due to successful fundraising or to his liberal stance on social issues, the Virginia gubernatorial elections could become an example of the powerful energy lobby's failed attempts to outweigh the political interests of millennials, women, and minorities.