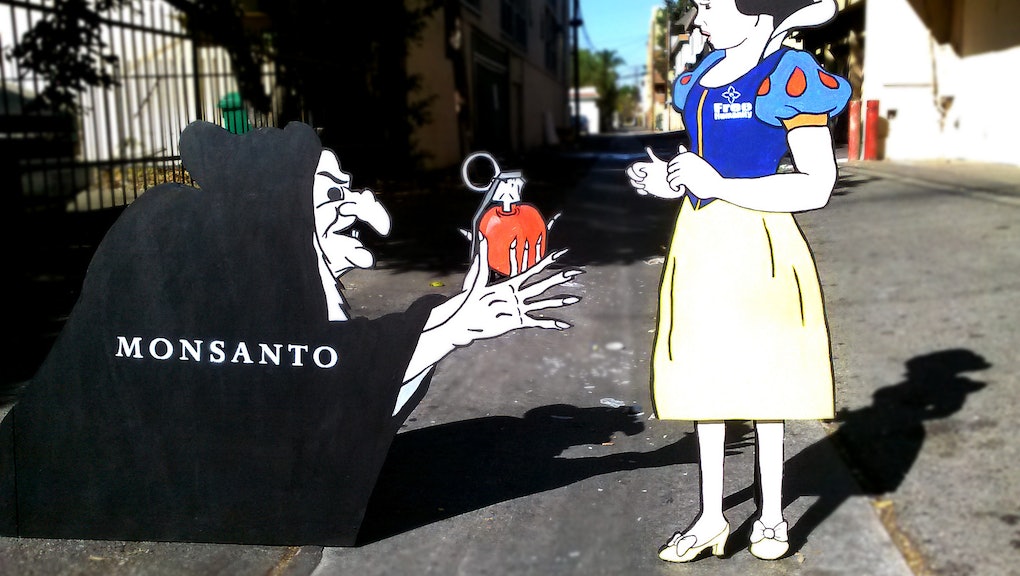 There has been a lot of controversy surrounding the topic of genetically modified (GM) foods and, more specifically, labeling food that contain GM ingredients. Today, the state of Washington will vote on an initiative which would force manufacturers to disclose their use of genetically altered crops. If approved, Washington would become the first state to pass GM labeling requirements, although dozens more are considering similar legislation.

A recent survey found that 91% of U.S. voters favor the labeling of food with GM.  However, the FDA has tested and approved all GM ingredients currently on the market. In fact, it’s possible that most of the food you consume today is genetically modified, considering the fact that 80% of packaged foods sold in the U.S. currently contain GM ingredients.

Despite all of this, the conversation around GM foods has been predominantly negative. So why all the fuss?

Consumers' fear stems out of uncertainty. GM foods were only introduced in the late 90s, so we don’t yet know the long term effects of consuming this type of product. But is this reason enough to write it off completely? To petition large companies to stop pursuing this type of technology? Absolutely not. The current benefits and future potential of GM foods are far too great to block GM foods altogether. Here are four reasons to give GM foods a chance.

If we tried to produce today’s current food yield using the technology from the 1960s (in other words, mostly "organically"), we would have to cultivate an additional 3 billion acres, the size of two South Americas.  And while in a perfect world, everyone would be able to eat locally grown, organic fresh food, we simply cannot afford to do that today. This problem is further exacerbated with growing population and economic development. In fact, those over the age of 45 have already witnessed the world population double in their lifetime. The population will continue to grow and, best case scenario, our land mass remains the same. Humans must adapt to these changes, and because GM foods can allow for "more crop per drop," this is one technology that can help us meet growing food demands.

2. Unnatural Does Not Mean "Bad For You"

GM food is sometimes referred to as "frankenfood." People argue that because GM foods would not occur naturally, they are unhealthy and possibly dangerous to consume. However, many things we expose ourselves to today were once considered "unnatural" just a few centuries, or even decades, earlier. Taking vitamins, traveling faster than we can run, eating microwaved food, pasteurized milk, and organ transplants could all be considered unnatural. That does not necessarily make them bad for you. Similar to GM foods, each of these examples requires appropriate research and oversight to determine that they are safe for consumers. But today, many of these "unnatural" activities are considered normal and are absolutely essential today. This is not to say that special interests should determine the level of oversight required to determine that they are safe for human consumption. However, we also should not allow anti-GM activists to dictate policymaking either. As the environmentalist Mark Lyans notes, "That would be like asking anti-vaccination campaigners to take the lead in eradicating polio."

GM crops can, and have, saved many lives from starvation and malnutrition. Similarly, certain anti-GM efforts have contributed to unnecessary deaths. For example, in 2002, the then president of Zambia refused food aid from the U.S. during a time of famine, simply because the crops were genetically modified. Additionally, "golden rice," rice genetically modified to combat Vitamin A deficiency, has been denied access to the hundreds of thousands of children who die from Vitamin A deficiency each year for the very same reasons. Considering the fact that all relevant scientific groups (American Association for the Advancement of Science, the American Medical Association, and the European Academies Science Advisory Council) have concluded that GM foods are safe, this refusal of food aid fueled by anti-GM campaigners has undoubtedly led to thousands of unnecessary deaths.

4. A World Without GM Foods Poses a Far Greater Risk

There is always an inherent risk to pursuing new types of technologies, but I will argue that the risks posed by not pursuing GM food technology are far greater. The efforts of more than 130 research projects, covering a period of more than 25 years of research and involving more than 500 independent research groups has concluded that biotechnology, and in particular GM foods, are no more risky than natural plant breeding techniques. GM foods, however, are not a panacea to rid the world of its food-related problems. But with proper oversight, continued independent research, and appropriate regulation, GM food technologies can be an essential tool in a toolbox used to combat hunger and malnutrition in a world with finite resources.