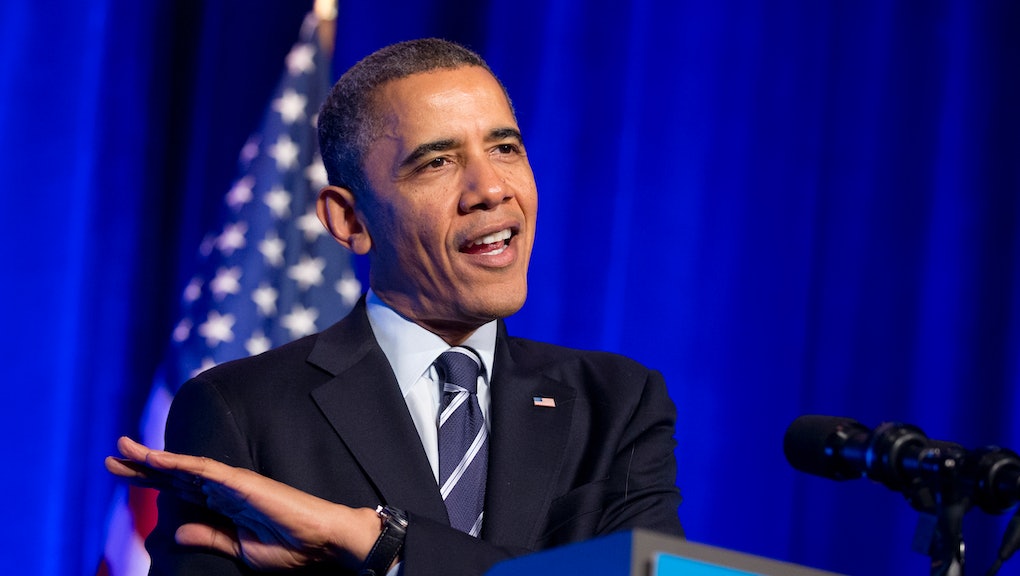 It's been an ugly month for the White House, all stemming from its inability to run the Affordable Care Act rollout smoothly. Healthcare.gov has been a disaster. Lets put it this way: The government landed on the moon 44 years ago, now it can't even get a simple website up and running in today's digital age.

Health care has turned into a quagmire for the Obama administration, and the White House has been forced on the defensive, trying to fix the problems cursing the Affordable Care Act website, while also seeking to drum up support for the beleaguered law.

One of the biggest target demographics for the White House has been young people. As the Wall Street Journal reports, insurers say the early buyers of health coverage on the new websites are older than expected so far, raising early concerns about the economics of the insurance marketplaces. If the trend continues, as WSJ reports, an older, more expensive set of customers could drive up prices for everyone, the insurers say, by forcing them to spread their costs around.

On Monday, Organizing for Action (OFA), the organizational arm that grew out of President Barack Obama’s successful presidential campaigns, held a national summit on the roll out and implementation of Obamacare.

The first major gathering in Washington, D.C., since July for the group, the focus of events and speakers looked past the troubled roll out of Healthcare.gov to implementation and enrollment, especially for millennials.

Earlier in the day, the summit featured a panel focused on engaging communities, especially young Americans. The panelists ranged from Planned Parenthood, to the Small Business Majority, and the Young Invincibiles, a national non-partisan organization committed to “amplifying the voices of young adults.”

Citing the level of noise and misinformation, Obama called on volunteers to keep doing the work they had done to fight for the laws implementation. “Let’s face it, a lot of us didn’t realize that passing the law was the easy part,” Obama said.

The day’s speakers, which ranged from Massachusetts Governor Deval Patrick to the president himself, focused on the importance of activists like OFA volunteers in making sure that information about the Affordable Care Act (ACA) makes it out.

Obama also tried to clear up the false narriative that Americans would be able to keep their insurance, a narrative Obama himself started early in his presidency on the onset of building the current health care law.

At Monday's meeting, Obama made clear: “Now, if you had one of these plans before the Affordable Care Act came into law and you really liked that plan, what we said was you can keep it if it hasn’t changed since the law passed,” said Obama, adding a fairly sizeable asterisk to the “keep your plan, period” quote infuriating many conservatives.

Whether this more nuanced message can effectively push back against the image presented by Obamacare opponents remains to be seen.

OFA’s director, Jon Carson, explained that the purpose of the summit was to talk strategy about how to ensure that young Americans and other uninsured populations get the information and access they need to get health care. “What we’re talking about and holding breakout meetings for this afternoon is to make the concrete plans for these next five months that we need to see for the implementation of Obamacare,” Carson said.

Information is key, said Van Ostern. “Young people have incredibly low rates of health insurance literacy, and in an effort to redress this problem, Young Invincible is in the midst of a nationwide education campaign to inform young people about their new options.”

The campaign includes a variety of outreach efforts, including community leader trainings, FAQs, a social media campaign, and a mobile app to help calculate costs and subsidies.

Speaking about his own experience implementing universal health care, Patrick urged patience. “Universal health care is not about a website — it is a value statement. It’s about the kind of country that we are, the character of who we are,” Patrick said. “If it requires a little more patience from us for the administration to get the website right, let me tell you, it’s worth it.”