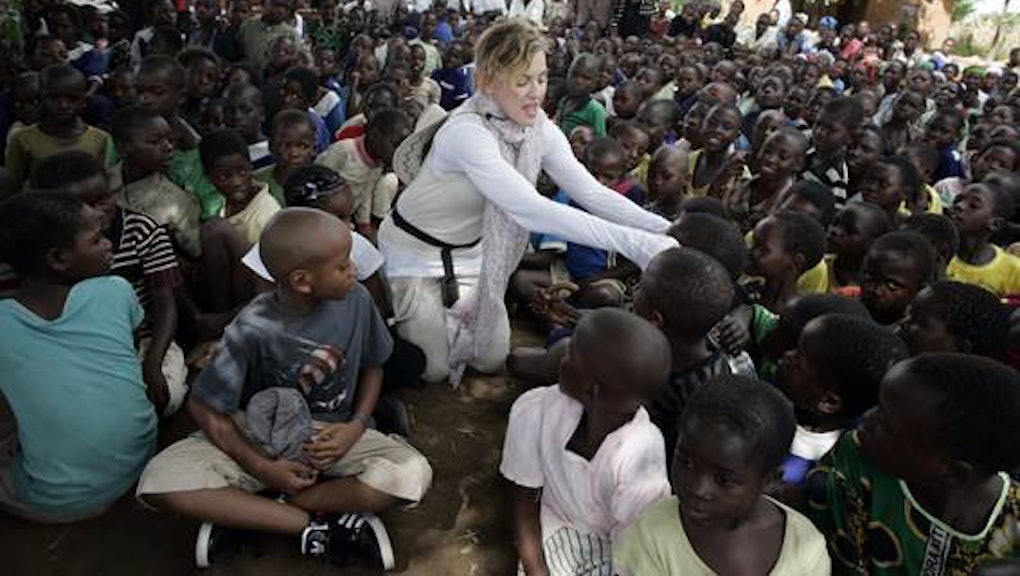 In case you haven’t noticed, Africa is in vogue. Not just for Bono anymore — everybody’s doing it now. Celebrities have been emerging in droves from their Beverly Hills mansions, penthouse apartments, sparkling yachts, and tinted, all-leather-interior Range Rovers and bravely flying across the world to dirty their manicured fingers in the problems of Africa, whether Africa wants it or not.

Along with the likes of Oprah and Angelina, Madonna hopped on the charity train in 2006, when she founded the NGO Raising Malawi. Since then, the organization has managed to raise millions of dollars (from Hollywood and Kabbalah’s wealthiest, of course) and mismanage nearly all of it.

Assuming her impromptu visit was more important than, you know, running a country of 16 million people, Madonna scrawled a quick little note to President Banda to let her know what she expected.

Malawi’s first female president not only released the embarrassing note to the public, she also issued an 11-point smackdown to the pop star, explaining exactly what she thinks about Madonna’s inflated ego. While I highly suggest reading the letter in its entirety, below are some of the highlights:

According to the claims, Madonna feels that the Malawi Government and its leadership should have abandoned everything and attended to her because she believes she is a music star turned benefactor who is doing Malawi good...

...Granted, Madonna has adopted two children from Malawi. According to the record, this gesture was humanitarian and of her accord. It, therefore, comes across as strange and depressing that for a humanitarian act, prompted only by her, Madonna wants Malawi to be forever chained to the obligation of gratitude. Kindness, as far as its ordinary meaning is concerned, is free and anonymous. If it can't be free and silent, it is not kindness; it is something else. Blackmail is the closest it becomes.

But Banda’s response hasn’t stopped the celebrity crusaders from making their own vanity trips to countries across Africa. Most recently, Christina Aguilera paid a visit to “war-torn Rwanda.” Decked out in safari gear sufficient for a trek through the rain forest, Aguilera visited a school in the country’s rapidly developing capital, Kigali, to serve lunch to some school kids, sing "Twinkle Twinkle Little Star," and make a really terrible promo video.

Never mind that Kigali’s streets are safer, and cleaner, then New York’s, or that Rwanda's economy is one of fastest growing in the world. All Aguilera actually served up on her Rwanda visit was a truckload of negative and flat-out incorrect stereotypes. Why bother addressing any of the country’s real issues (like the war in neighboring Democratic Republic of the Congo) when you can feed GMO cornmeal to strangers and look great doing it?

Really, it’s hard to know whether to laugh or to cry.

Besides feeling a little "White Man's Burden-y," Madonna and Aguilera’s Africa forays have a lot in common. Both show blatant disregard for the communities they claim to serve. Both women look equally silly in their awkwardly posed publicity photo shoots with African children (see Madonna’s cowboy hat). Both would rather make a business out of exploiting Africa’s problems than congratulate its many accomplishments.

Madonna, Christina, Bono — the list goes on. Poverty and injustice are not going to be solved by a celebrity-turned-activist. The sad fact is that such people often cause more harm than good.

Not that I’m out to bash all do-gooding Westerners. Advocacy and aid have their places in this world. But the attitudes and ignorance of certain outsiders make it clear that they aren’t serving anyone but themselves.

There’s a fine between charity and exploitation. If you expect to be worshipped in return for your good deeds, if you need to show everyone in the world how great you are for holding hands with a poor black orphan, if you haven’t even thought to ask your beneficiaries what they actually need, don’t bother.

Africa doesn’t exist to make you feel better about yourself. Madonna learned the hard way.