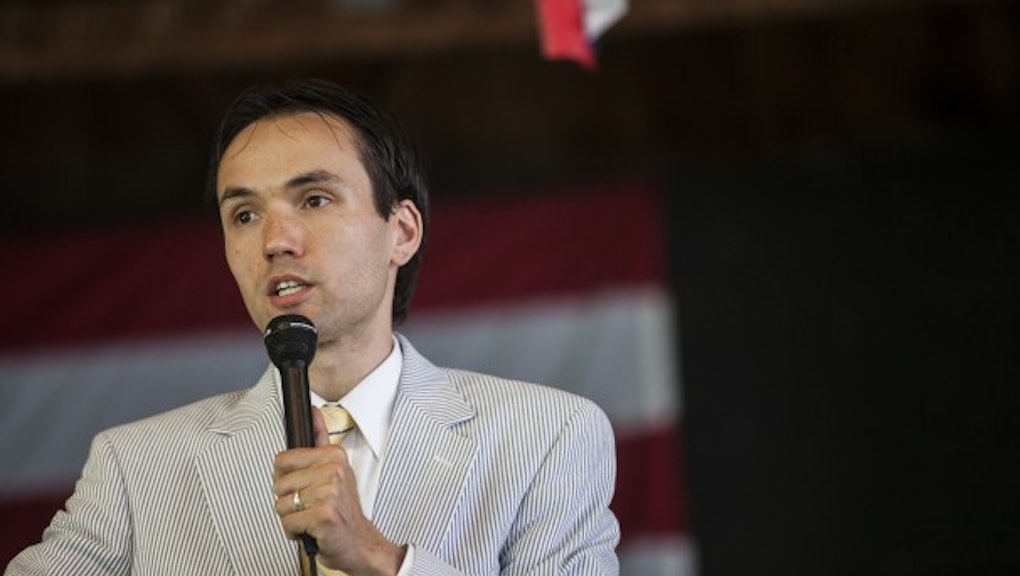 VA Elections 2013: Vote Sarvis — Do You Really Like Your Other Options?

After an election season that will go down in the history books for being one of the dirtiest in recent memory, the day has arrived when we must vote for the lesser of two evils. Numerous news sources have announced that both Terry McAuliffe and Ken Cuccinelli have qualities that make them unelectable. Though he's not terribly experienced, Libertarian Party candidate Robert Sarvis offers a clean, smart, and principled solution by focusing on a government for the people instead of political cronies. Voting for the other two candidates is the only throwaway vote here.

Both McAuliffe and Cuccinelli use pro-business rhetoric of cutting red tape and incentivizing investment in the state, yet they don’t know what they’re talking about. McAuliffe supports the EPA’s new regulations on coal-fired power plants and has flip-flopped on his support for offshore drilling. Cuccinelli, meanwhile, has said he'd promote business growth and personal consumption by offering $1.4 billion in tax cuts by closing loopholes, yet he has failed to specify which he would end.

A symptom of these economic deficiencies is the candidates’ refusal to abide by the rule of law. Cuccinelli received more than $140,000 in campaign contributions from gas and oil companies, who he as Virginia’s attorney general helped absolve from hundreds of millions of dollars in taxes owed. McAuliffe’s activities with GreenTech Automotive, meanwhile, initiated an ethics investigation that revealed back-room deals stretching to the Clinton era.

The first agenda on Sarvis’s economic platform, on the other hand, is instituting the rule of law. As a Libertarian, his economics might seem “charmingly pure and naïve”, but they make sense. While the other candidates believe in subsidizing and providing tax breaks to certain industries, Sarvis argues that he wants an “equal playing field” by ending all tax favoritism. While pro-business politicians often develop close corporate ties with rich interests, giving free markets a bad name, Sarvis sees through this and has pledged to end all special treatment of industry. From those funds he is then able to call for the elimination of certain state taxes, and a sharp reduction of the state income tax.

Yet should we reward McAuliffe just based on the fact that he looks like a modern compared to Cuccinelli’s 19th century positions?

Sarvis has on numerous occasions come out in support of gay marriage in Virginia. Furthermore, the libertarian position has a fundamental consistency in advocating for the government to get out of the marriage business altogether. He’s also the only candidate to run on a platform of legalizing marijuana, which would in itself be an economic measure. As the Danville Register & Bee wrote, there’s no question that “Robert Sarvis offers a real alternative this year, a break from the two-party paradigm that has not served us well.”

The final question is, can he win? Voting for a third-party candidate is difficult. Most would argue it’s a throwaway vote since Sarvis can’t possibly win. Here’s where they’re wrong.

As the Daily Progress stated, “A substantial vote for the Libertarian candidate also might serve to push the major parties into reform.” While one of the two main candidates will win the election, as politicians, they’ll have to satisfy voters and follow their lead.

Voting for Sarvis is the best way to voice one’s desire to change the system. Additionally, Sarvis is currently polling at around 10-12% of the vote. If he passes the 10% mark at the election, the Libertarian Party will get major party status in Virginia, another measure that would build a more competitive electoral democracy and prevent such unfortunate races in the future.