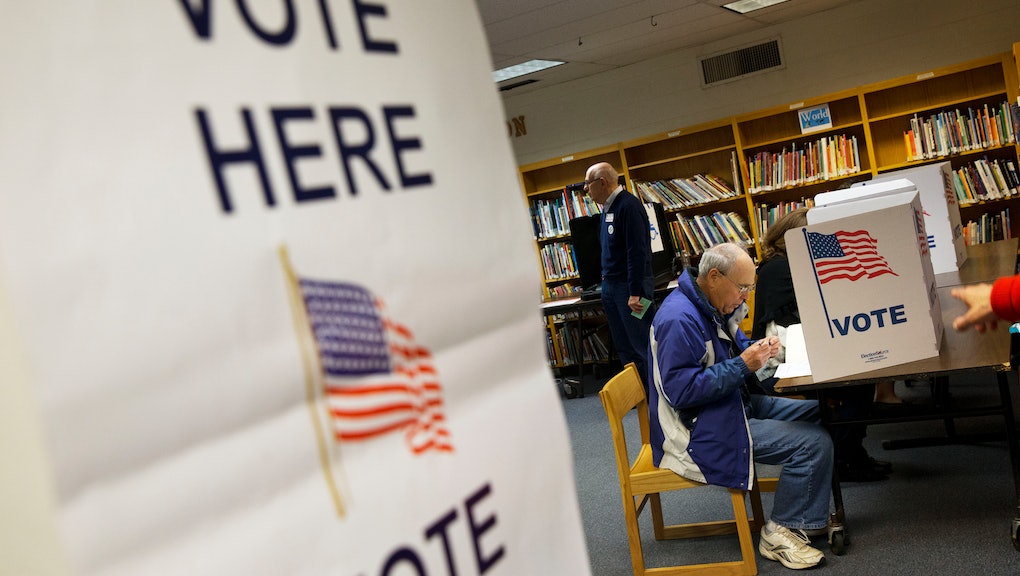 Virginia made history in 1990, when Doug Wilder became America's first Black governor. Yet, today in 2013, you’d think Virginians were fighting to repeal discriminatory voting laws that existed in the lingering Jim Crow era of 1913. The upcoming voter ID requirement is but one example of voter obstructionist laws. Starting next year, some of the nation’s strictest voting restrictions will go into effect in Virginia—notwithstanding that in the last dozen years these costly restrictions would have prevented only one case of voter fraud.

But voters needn’t wait until next year to experience Virginia’s regretful voting policies—this year’s gubernatorial election presents no shortage of them. The ongoing voter purge serves as a prime example. Consider that as a result of the GOP controlled Virginia Board of Election’s unilateral decision to purge what they deem ineligible Virginians, nearly 40,000 otherwise eligible voters are now unable to participate in this election. Despite attempts to remedy the situation by legal means, tens of thousands of blue collar Virginians will be turned away at the voting booth for matters entirely out of their control.

And speaking of matters outside their control, Virginia’s returning citizens, individuals with past felony convictions, remain disfranchised. Accompanied only by Florida, Virginia is the only other state in the Union that refuses to return voting rights to returning citizens, even after they’ve served their time. Considering the disproportionately large population of Black Virginians in prison or with a criminal record, this discriminatory voting restriction largely and admittedly disfranchises the African American base. In fact, of the 350,000 returning citizens in Virginia, 242,000 are African Americans. This means that while Black Virginians comprise only 19.6% of Virginia’s population, they represent a disheartening 69% of disfranchised returning citizens. A shocking one in five Black Virginians are unable to vote in this election due to discriminatory voting laws.

This draconian legislation is not only in contrast to our nation’s 48 other states; it is also uniquely discriminatory on a worldwide scale. Nations like the United Kingdom automatically restore voting rights immediately upon release from prison. Many of America’s nearest allies—France, Israel, & Germany, for example—even allow their citizens to vote while in prison, as do several developing nations like Kenya and Peru. The only exception is if a citizen was sentenced for a crime against the electoral system. Thus, despite worldwide and demonstrably productive elections to the contrary, Virginia insists on disfranchising hundreds of thousands of returning citizens in Virginia even after they’ve paid their debt to society.

Aggravating the situation is that Virginians are still reeling from the proven voter suppression tactics employed in the 2006 Virginia Senate election. Recall that during the election, among other tactics, Democratic voters actually received calls fraudulently conveying that voting will lead to their arrest. Thus, the future of voting rights depends on this election. Apathy to the voting process ensures those Virginians currently and unconstitutionally disfranchised will remain so for years into the future—perhaps forever. Likewise, a vote for the candidate pushing unprecedented and unwarrantedly strict voting rules, voter ID requirements and otherwise, ensures even more otherwise eligible Virginians will be prevented from exercising their constitutional rights in the future. Indeed, the social justice organization, Virginia New Majority, reports that as many as 57,000 Virginians may be purged for this 2013 gubernatorial election.

Like 1990, once again a black Virginian, E.W. Jackson, is running for office—that of Lt. Governor. Yet, inherent in Jackson is the juxtaposition of how bizarre Virginia’s current election actually is. Governor Wilder broke down barriers of racial ignorance and intolerance in 1990—even ordering state universities and agencies to divest investments in South Africa due to South Africa’s apartheid policy. Candidate Jackson instead believes that federal programs that support women are more destructive than slavery was to Black families. Jackson believes that Planned Parenthood is more destructive to Black Virginians than was or is the KKK. And here’s the really frightening news—despite these extreme views, Jackson still maintains 42% of the vote for likely Virginian voters.

Virginia voting has a long road ahead. It is 2013 today and Jim Crow is supposed to be dead. But unless Virginians rally together to vote for the rights of those disfranchised, a lingering Jim Crow may well ensure it is 1913 tomorrow.

Qasim Rashid is a Richmond based attorney, human rights activist, and author of The Wrong Kind of Muslim. Follow him on Twitter @MuslimIQ.