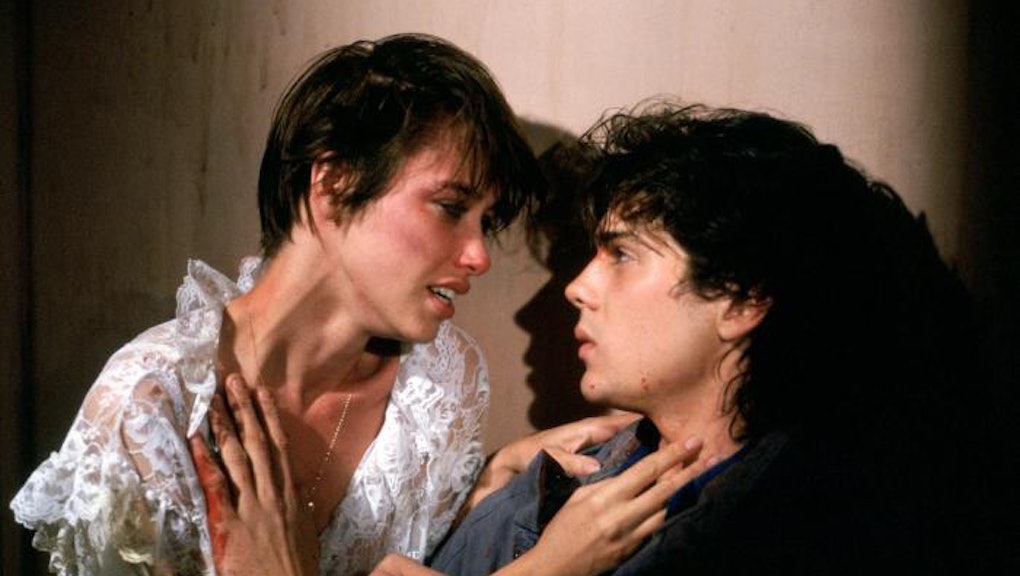 What 'Crack House' Taught Me About Ghetto Life

In 1989, Michael Fischa enjoyed the most prolific stretch of his Hollywood career. Sources disagree on whether his debut feature, Death Spa, came out in 1987, '89, or '90, but it's likely one of three films the Austrian-born director released in the final year of that decade. The second was My Mom's a Werewolf, a horror-comedy co-starring John "Chest Hair" Saxon. And third came the sleazy 'hood thriller Crack House, which I recently watched and found to contain some valuable lessons for today's youth.

Crack House stars Greg Gomez Thompson as an L.A. high schooler who likes having sex with his girlfriend in a car full of Jesus paintings. After he proposes to her, rival gang members kill his cousin, spurring a revenge mission that lands GGT in prison. While he's locked up, his fiancée falls in with a dope dealer named Big Time and succumbs to a crack cocaine addiction, eventually becoming the captive of local kingpin Steadman (Jim Brown). Now, it's up to Greg Gomez Thompson to talk his way out of jail, rescue his boo, and destroy Steadman's crack empire (which is basically just one house, but whatever).

You're probably wondering how a schlockmeister and non-Schwarzenegger Austrian like Fischa pulled off a film like this. And who could blame you? To date, the most nuanced collaboration between Austrians and African-Americans has been the Christmas classic Jingle All the Way (shout out to Sinbad). In fact, Fischa failed: Crack House is a relatively cruel, ugly, and misogynistic action-melodrama that people might've boycotted had they deemed it worth the energy. And this is coming from someone who liked the film.

Crack House's true value lies in its encapsulation of the era's mythologies. Consider this: urban decay and the gutting of social welfare programs marked the Reagan and Bush presidencies, pushing America's inner cities even further toward society's margins. The media reflected this isolationism — it seemed the only time mainstream America heard voices from the inner city was the evening news, and even then it was mainly to highlight the terror of an armed robbery or drive-by shooting.

This is all pretty simplistic. People in the 'hood do stuff besides rob and kill each other, but 80s mass media would have had you believe otherwise. The situation is comparable to taking one nude selfie that goes viral and having everyone think the only photos of you in existence are nude selfies. Hence the importance of diverse representation, especially when it comes to marginalized people: if expensive political failures like the War on Drugs (which disproportionately impacts inner city residents) rely on the illusion that a "crime and punishment" approach is the best way to deal with addiction and trafficking, then movies like Crack House are great ideological propaganda. They keep the mythology alive.

Los Angeles might be the most prominent stage on which these myths have played out. Whether perception matches reality is subject for debate, but many parts of the city have built a somber reputation on the presence of gangs and drug-related violence. Most progress made in curbing this violence comes from cooperative collaboration between law enforcement, gang members, and civilian residents, but you wouldn't know it after watching Crack House. The film's climax perfectly reflects attitudes toward inner city crime at the time: why waste energy rehabilitating criminals when you can just drive a tank through their houses?

This is why films like South Central-native John Singleton's 1991 Boyz N the Hood were important. It's harder to marginalize the ghetto when you know that pretty non-gangbanger/non-crackheads like Nia Long and Morris Chestnut live there (I'd throw in Cuba Gooding, Jr., but I feel I'd be hurting my case somehow). Boyz was a necessary reaction to Crack House because it emphasized a more complicated dialogue about inner city life, one that focused on the humanity that persisted there despite difficult circumstances. It also probably wouldn't have existed without Fischa's film.

Today, we have tons of media resources at our disposal, but interaction between the inner city and the mainstream remains limited. Social media segregation and a stark digital divide highlight the grim racial and socio-economic realities of our online existence. Small steps have been taken to shift perceptions of these areas, like the 2003 name change that turned South Central L.A. into the friendlier, less murder-y "South L.A." (It worked — I visited "South L.A." last January and never once feared getting killed in a drive-by!) But I think millennials can do better. And why not? What else are you doing with all your free time and unemployment checks?

I'm clearly no expert on the topic, but I really hope our digital lives don't become today's version of Crack House — just another mass mediated reflection of real world marginalization. Solutions to this dilemma aren't easy to come by (hence my declining to present any here), but they do exist (probably).

The question is, where will they come from, and when? Or will Michael Fischa have the last word?

(NOTE to Michael Fischa's Attorney: This article in no way intends to blame your client for any of the problems mentioned above. He just happened to be there when the shit hit the fan. Thank you, and please don't contact me.)