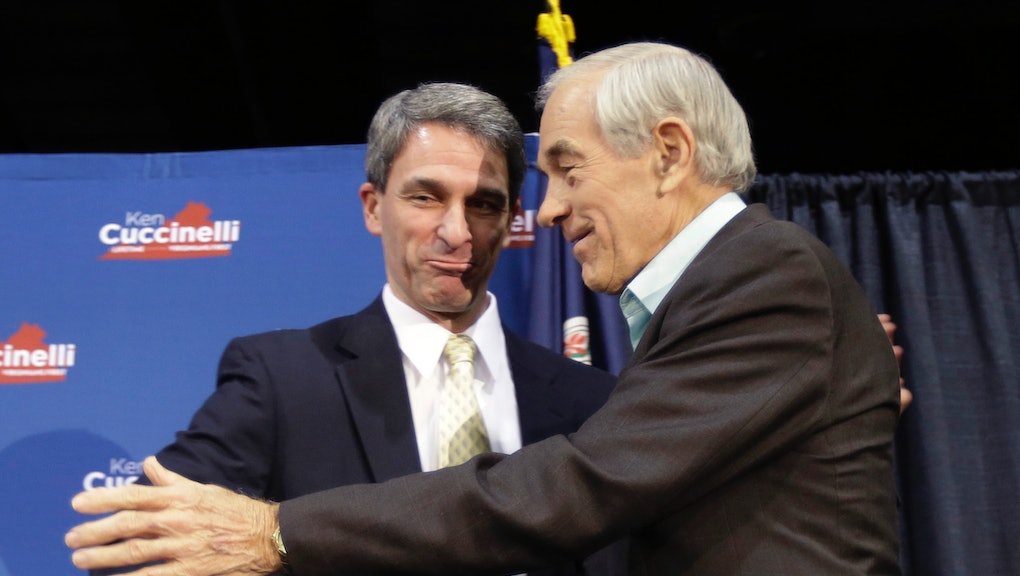 Virginia Elections 2013: Why is Ron Paul Trying to Sabotage a Fellow Libertarian?

Why is Ron Paul trying to undermine his own ally? Sarvis, the Libertarian Party's candidate running for governor of Virginia, was given a rude awakening to big-league politics when Paul, a national libertarian standard-bearer, flew in at the 11th hour to headline a political rally for Republican nominee Ken Cuccinelli.

Paul’s endorsement of Cuccinelli shows you that once again, when it comes to politics, size matters. In a plurality-takes-all race, third party candidates have no chance of winning a major election. The system is set up to allow for third-party candidates to promote a specific issue, but absent of that they face an uphill climb to getting elected.

A third-party candidate can change the conversation and bring attention to important issues but they can’t win on a national or statewide level. Despite Sarvis’ impressive resume, there is not a specific issue or idea that he endorses that causes him to stand out in the crowd and that would allow people to rally around him.

Time and time again, the Libertarian Party is confronted with this message and they don’t have an answer for it. Gary Johnson found out the hard way that once he left the safe environs of the GOP, he was no longer considered a leading voice in politics. His record as an accomplished governor carried no weight in big-league politics. To his credit, Johnson did endorse Sarvis, but clearly this had little to any bearing on the race in Virginia.

Paul’s main objection to Sarvis revolves around the fact that Sarvis has considered supporting a new mileage tax. Paul said it would be “insane” to support Sarvis given even that tentative support, but there is no evidence that Paul has ever spoken to Sarvis about why he would support what is described as a “vehicle-miles-driven-tax.”

Sarvis, who was polling extremely well by third-party standards, was hoping to respond to surveys that show that 60% of Americans favor a third party by doing well at the voting booth. However, Paul’s endorsement was explicitly designed to siphon off Sarvis’ voting base and redirect it towards Cuccinelli. Paul’s appearance has the potential to be exceptionally damaging because Sarvis was hoping to obtain the 10% of the vote required to guarantee the Libertarian Party a spot on the Virginia ballots through 2021.

Paul’s endorsement of Cuccinelli rather than Sarvis is consistent with his longtime affiliation with the GOP. He may be a libertarian when it comes to ideology, but when it comes to politics he remains a stalwart Republican and supporter of the two-party system.