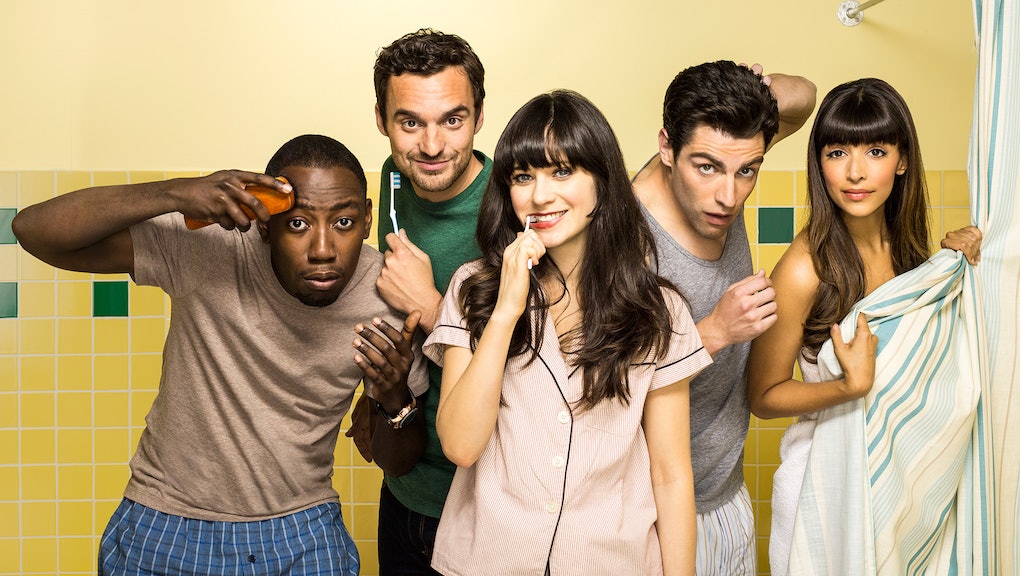 Which 'New Girl' Roommate Is Your Spirit Animal?

Over three seasons filled with laughter, we've fallen for the four roommates who imbue Tuesday nights with quirks, snark, funny faces, and the occasional song and dance. We often find ourselves quoting our favorite besties, whether it's Nick's bashful "I don't know" or Jess's adamant "I want to have sex with him big time!" In fact, they've become so intrinsic to our being that they're almost a part of us — maybe even our spirit animals? Here's a quick primer on which New Girl character is most aligned with you.

Winston's a jock and a jokester who loves to take pranks to the next (arguably illicit) level. If you put on a tough-guy persona, but really you're a softie who's terrified of the dark, you're a Winston. Your one true love is a feline, but it's complicated because your roommates aren't accepting of your furry friend. Thus, you're always fifth-wheeling, which can be a real drag sometimes. Because your signifi-cat other doesn't speak English, you have to find entertainment outside of your relationship. For a colorblind individual, you attempt an inordinate amount of puzzles to pass the time. You'll do anything for your friends, including traveling to Mexico to rescue an incarcerated brother from another mother. As talents go, you may have been a professional basketball player, but your moves are what truly distinguish you from the crowd — that preteen that wanted to steal your thunder as head usher didn't know what he was getting himself into when he challenged you on the dance floor.

Schmidt is a Jewish businessman who enjoys the luxuries of life, including a silk kimono on casual weekends. If you dressed up as Sexy Santa at your last Christmas party, chances are you're a Schmidt. Sometimes, you catch yourself staring at your reflection in the mirror, but you're just such a sexy beast that you can't stop. Despite your amazing bod, you still have nightmares about the days when you were the "fat kid," and you're cautious about staying on regimen, even if that entails hanging from the ceiling to do upside down crunches. In your friend group, you're the only one with a "real" job and an office to call your own, and you know you're the most mature in your circle. At work, you're surrounded by females, and though you complain about the estrogen-ed environment, you secretly adore it. Women get you and your OCD habits, pink button-downs, and affinity for the perfectly seasoned turkey with just enough tarragon. Even though you're secretly sensitive, you make incredibly lewd jokes to assert your manhood that's sometimes questioned because of your culinary abilities and posh look. Your comments often lead to a contribution to the douchebag jar, but you're not too worried about a few bucks. That's right, you're kind of a big deal.

Nick's a 30-year-old bartender who quit law school three semesters before graduating. If you take it a day at a time and don't stress too much over the minutia, you're probably a Nick. Despite your legal knowledge — or maybe because of it — you live on the edge by never paying your bills.Your limitless supply of hoodies shows just how little you care about how others perceive you. You think you're cool and enigmatic, but in all actuality your feelings are incredibly apparent. Whether a turtle frown or a smile because the love of your life is around, your face is an open book,  even if you wish it wasn't. You have trouble committing — blame it on daddy issues — but once you do, you're all in. Something's terribly wrong if you don't have a beer in one hand and the remote in the other.

Jess is the whimsical school teacher who courageously moved in with three eccentric male roommates. If you have trouble saying the word "penis," hello Jessica Day! You often find that song better expresses your sentiments than mere speech, and you're more than comfortable breaking out into a belty, upbeat tune whenever the occasion arises. This Halloween, you dressed as a monster because a princess was too mainstream. Your entire wardrobe comes from Anthropologie, and you have a penchant for floral prints and 50s fashions. You hang out with kids because they understand you, and you can be your wacky self around them without any judgment. Adults are more complex, and relationships are a real challenge. You've tried the whole friends with benefits thing, but you can't get through a makeout sesh without growing attached. Oh well — if worse comes to worst, you can always slip on some PJs and watch "Dirty Dancing" over and over again.

Whether you're a Winston, a Schmidt, a Nick, or the New Girl herself, don't be afraid to grab your own fantastic wolfpack, head out to a fancy restaurant, eat some free bread, and get kicked out for singing "Time of My Life" at full volume. If that's not your style, you could always enjoy a relaxed evening at home — with your awesome roommates, you can't go wrong with an unconventional game of True American.