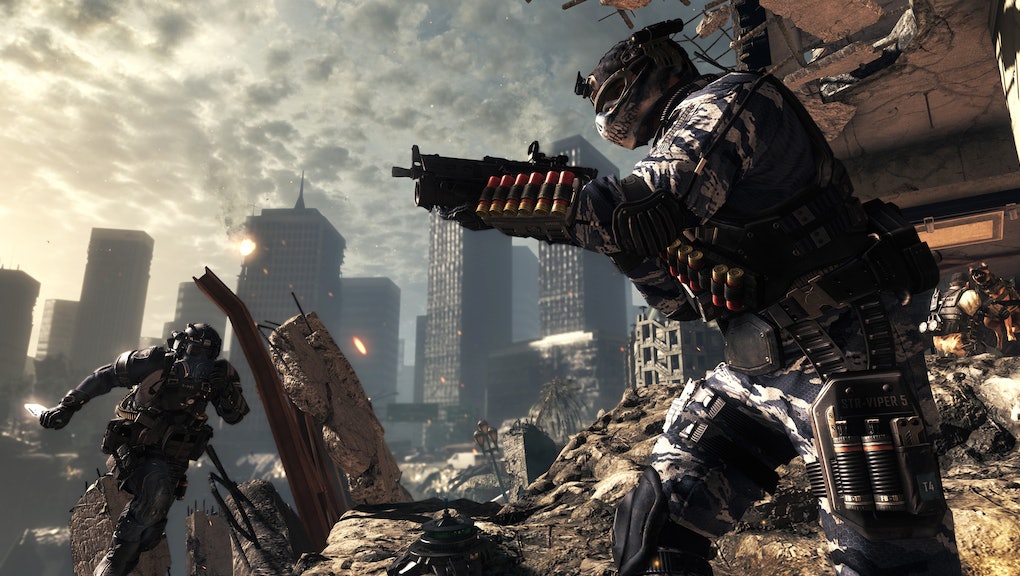 'Call of Duty: Ghosts': How the Series' Success Stunted a Gaming Revolution

Call of Duty: Ghosts, the latest in Activision's now-iconic military shooter series, hit store shelves today. Already geared to be one of the best-selling games of all time and certainly one of the year's biggest hits, Ghosts is the closest thing games have to a blockbuster release. As the video game medium grows in stature with regard to storytelling and cinematic presentation, when will the gamer start to value meaningful creations above the blockbuster?

Don't get me wrong: art-house productions are not the highest earners in any field of storytelling. When it comes to film, the representations of war by filmmakers like Kathryn Bigelow and Clint Eastwood fail to trump blockbusters like The Avengers or Transformers. As for literature, Twilight and Fifty Shades of Grey will always come out on top over We Need to Talk About Kevin or The Brief and Wondrous Life of Oscar Wao. And in television, Homeland does not pull the same numbers as The Big Bang Theory or Dancing With the Stars.

Unsurprisingly, this trend is evident in videogames, too. Call of Duty, after four consecutive years as the top-selling series, is successful enough to leave all other products — including its fellow military shooters — feeling insufficient by comparison.

What's more concerning, however, is that gaming is perhaps the last industry where the blockbuster-popcorn flick is legitimately considered a better product to its more artful competitors.

Fifty Shades of Grey sold much better than most books ever will, yet no one is nominating E.L. James for a Nobel Prize. Michael Bay is one of history's most financially lucrative directors, yet his stint with Optimus Prime is bringing him none of Jessica Chastain's Oscar nods. And Homeland gets the sort of award buzz that The Big Bang Theory never will.

Yet, in gaming, Call of Duty is king — the gold standard for shooters and winner of more Game of the Year awards than most of its competitors combined. And it is, in every respect, a blockbuster. Look at the way it is constructed: many gamers often just skip the story and go straight to the online multiplayer mode where they assume the mindless roles of soldiers or enemy combatants.

If players choose the story, it's hardly Oscar-winning stuff. Compare it to games like Alpha Protocol — a more intelligent and nuanced look at the world of espionage — and all COD installments pale in comparison. But of course, COD is a shooter and comparing its story to a role-playing game — a genre built almost entirely around strong narrative — is unfair.

But even comparing COD to other shooters shows that it has a simplistic approach to storytelling. Look at games like Halo 2, which completely turned the story on its head by allowing multiple perspectives from numerous sides of the conflict (never mind that it's regarded as one of the worst campaigns in shooter history). Or even consider Half-Life 2, particularly Episode One, which had long periods of silent driving that forced the player to contemplate everything that was going on.

Essentially, playing COD is like playing The Expendables — and even then, you're almost always forwarding to the fight scenes.

And to really drive the point home those million spent on Hollywood-like effects and camera angles will only amount in a derivative product, COD's latest commercial stars Megan Fox as a "sexy sharpshooter."

Yet gaming does have the tools to deliver stories unlike any other genre. If products like Mass Effect are any indication, the portrayal of the military can be done with a lot of beauty and a lot more maturity than the "teabagging" crowd would suggest.

Just as Hollywood occasionally has films that mix blockbuster production budgets with filmmaking artistry — Christopher Nolan's Batman trilogy being a prime example — gaming needs a series to step up and show that a big budget can afford more than another "brainless shooter." And while some have come close — including the aforementioned Mass Effect — no one has yet been able to overtake the (quite literal) toilet humor in Grand Theft Auto or the "shoot first, think never" approach of Call of Duty.

Videogames have quite a few problems, and their idiotic representation of war is one of them. But there are some facts that we must keep in mind before criticizing Call of Duty alone. Yes, Call of Duty is quite possibly one of the most immature, frat-boyish approaches to a serious subject ever. But it is fact that Call of Duty is, by far, not the only game to sexualize, romanticize, and crudely represent war. Call of Duty sets industry standards when it comes to visual and audio design. It is, in fact, so much a cultural icon that it is no longer "just a videogame."For a youth that views or reads virtually nothing of substance, videogames are amongst their primary forms of artistic consumption. And that consumption is most often directed to Call of Duty.