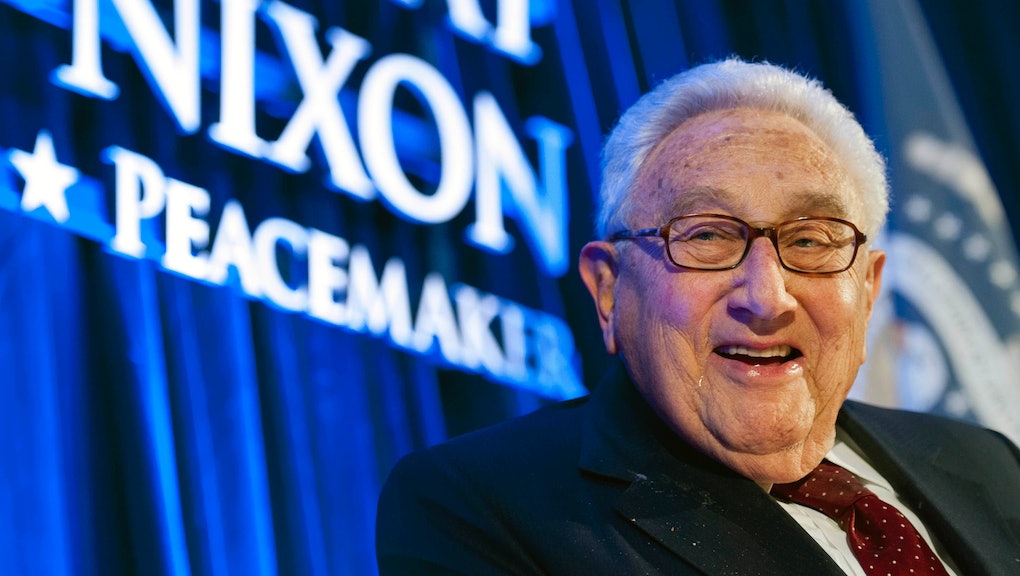 Chris Christie 2016: Henry Kissinger Wants It, So It's Probably Going to Happen

Pity poor Henry Kissinger. The German immigrant's hard-nosed realpolitik worldview cast a shadow over all of American foreign policy from the 1970s forward, but he just gets no love. Liberals have always been fond of (correctly) pointing out that he is a war criminal who sabotaged peace efforts in Vietnam and sponsored murderous Latin American regimes, but the rise of libertarianism in the GOP means that Republicans are starting to distrust him too.

Luckily, Kissinger still has the ear of Chris Christie. Christie has made no secret of his dislike of "this strain of libertarianism" in the GOP that, in his view, ignores the lessons that New Yorkers and New Jerseyans learned after 9/11. In fact, Kissinger himself encouraged Christie to run in 2012 and according to Dave Weigel of Slate, brushed away the governor's thin foreign policy resume by saying, "We can work with you on that. Foreign policy is instinct, it’s character, that’s what foreign policy is." (Say all this in a Kissinger accent and it either starts to sound super badass or super creepy, depending on your views.) Kissinger himself has gone on record saying he thinks Christie would be an ideal national candidate for the GOP:

Why is Christie so beloved by the GOP establishment? Largely it's because he fits the ideological profile of the New York-area GOP: Fiscally conservative, hawkish on foreign policy, and silent on Culture War issues (To be fair, most New York Republicans are actually far more liberal than Christie on issues like abortion and gay marriage, but they can live with the fact that Christie doesn't talk about them much). Either way, the courting has already begun. Ken Langone, the cofounder of Home Depot, ambushed Christie with 50 prominent Wall Streeters and implored him to run for president. And Christie nailed his non-refusal refusal over two years ago:

Somewhere in his lair, Henry is cackling.