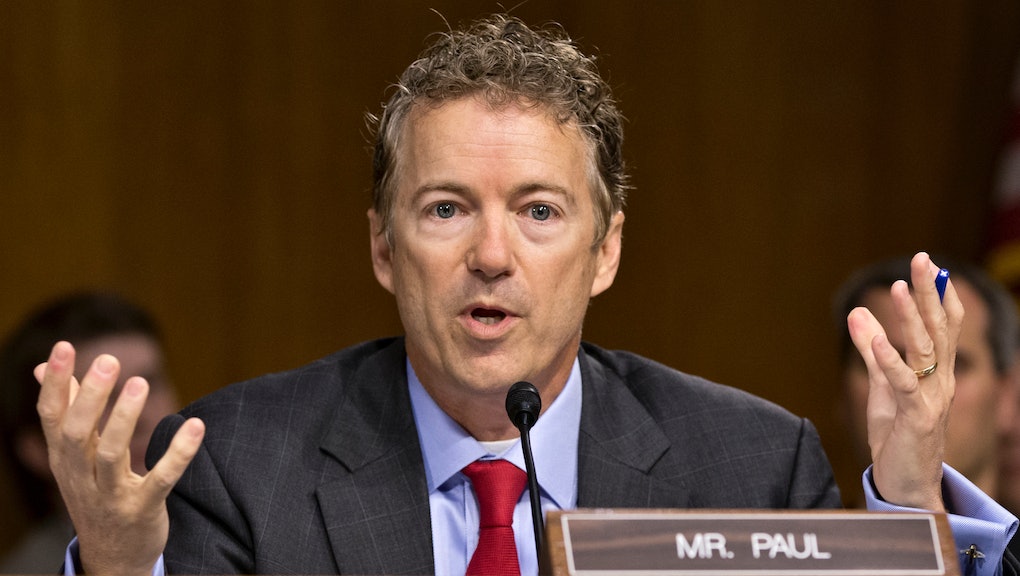 Rand Paul Accused Of Plagiarism — This Calls For a Duel!

Dearest readers, I ask that you take a moment to consider the following: whatever else you think of him, esteemed senator, gentleman doctor, and Kentucky native son Rand Paul should be permitted to duel.

Hear me out, my countrymen!

Over the weekend, Messr. Paul's very honor was tarnished when that wretched termagant, Rachel Maddow, accused him of parroting that most dubious of sources, Wikipedia, in one of his speeches. Worse — and most curiously — he was merely repeating a synopsis of Gattaca, a fantastical 16-year-old moving picture. As evidence of plagiarism grew, Andrew Kaczynski, of that highly variable pamphlet Buzzfeed, reported that Messr. Paul had also cribbed text for his recent tome, Government Bullies, from a report by conservative think tank, the Heritage Foundation. And today, the shameless Kaczynski returned to claim an article that Messr. Paul penned for the Washington Times, a religious pamphlet, had, in fact, pulled text from an opinion penned for the Week!

It is simply too much. Readers, I ask, how would you respond to such infuriating claims? Would you not, like Messr. Paul himself, invoke your desire to face your foes on a field of honor? Would you not feel the urge to peel your lace-cuffed glove from off your hand, and strike it across your opponent's smug countenance before throwing said gauntlet down?

Yea, to quote Messr. Paul himself, as he spoke to ABC's This Week, "I take it as an insult, and I will not lie down and say people can call me dishonest, misleading, or misrepresenting — I have never intentionally done so, and like I say, If dueling were legal in Kentucky, if they keep it up, you know it'd be a duel challenge."

Ladies and gentlemen, let this man have his reasonable and period-appropriate satisfaction!

To hear the New York Times tell it, very much. One would think, upon reading their account of the history of duels in the fine state of Kentucky, that the phrase "yellow journalism" was actually coined to describe the broadsheet's sheer cowardice. "In the late 1800s," they begin, "so many Kentuckians were killing one another in duels that the Legislature saw fit to require that incoming state officeholders swear an oath that they had not fought in a duel, issued a challenge for a duel, or assisted at a duel, 'so help me God.'"

It is clear to me, as I am sure it is to all of you, that this law must be struck down, as must all of Messr. Paul's repugnant enemies. Countrymen, let this man defend himself with his pistol, since he has not been able to with his words — or anyone else's.