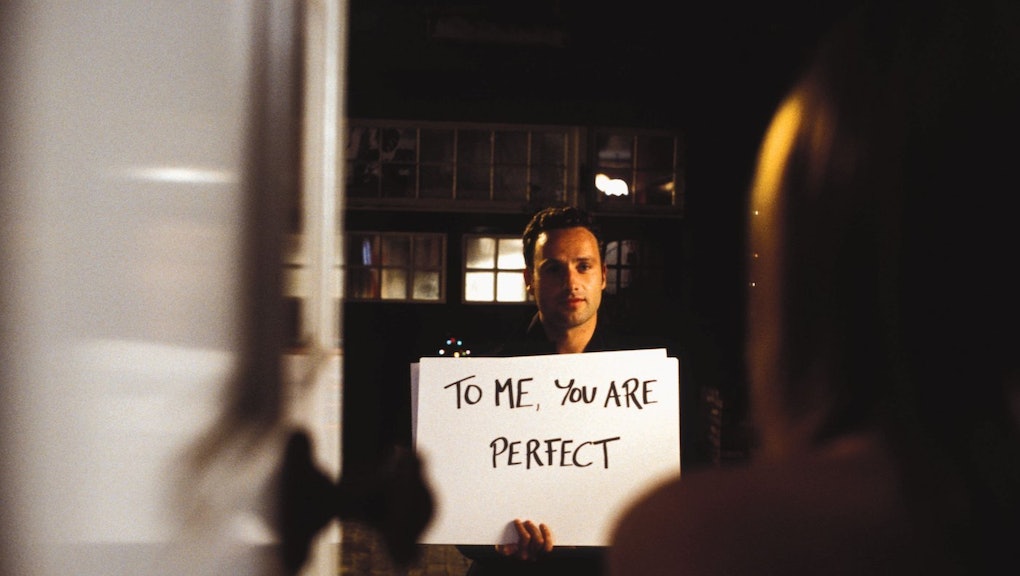 What 'Love Actually' Taught Us About Love, Actually

When I was 11, my Mum took me to see Love Actually at the cinema. We sat in the Odeon in Bournemouth, and two people started to have sex in the front row. Being the most English people the world has ever known, neither of us spoke up. In fact, the only time we spoke was when I attempted the high note in Sugababes' "Too Lost In You," and Mum told me to be quiet because I might ruin the experience for others.

Besides these two very important — but specific — lessons, I've found that watching Love Actually teaches you a lot about love. Richard Curtis is basically the Aphrodite of the modern day, and we all owe him a lot because, in the decade since his Christmas spectacular came to cinemas, it is safe to say that nobody has dared to buy a Joni Mitchell compilation for their wife ever again. But there are many other ways he has changed the way we love, too. Let's take a look.

1. Joni Mitchell is all you need at a time of sadness.

There must be an app on your phone where, whenever you feel a certain degree of sadness, it just starts playing "Both Sides Now." And if there isn't, somebody invent it. Now. Whenever I've had a break up/death in the family/paper cut, this 2000 cover of her own 60s anthem is what I play. Joni Mitchell draws everything out of you. She's a reverse-tear sponge. She just makes you feel.

Emma Thompson in Love Actually provides the necessary steps to take if you feel sad and need to listen to Joni Mitchell. Undress and perform mundane tasks while looking dismal. Do this enough times and your roommates will realize that they need to make you a cup of tea every time this song plays.

Nothing gives you more leeway than an English accent. You can say just about anything and you sound like a gentleman. It's a journalist's greatest tool, as well as a lover's. Even when you're Kris Marshall (a.k.a. Colin) and you're doomed to a career of phone company adverts and BBC sitcoms after this one moment in the sack with January Jones, you still have your moment in the sack with January Jones. And the others. Without pajamas. In that moment, every awkward English teenager breathed a sigh of relief in knowing that the dairy state would always be there for them.

3. The most important way to help a troubled partner is to ignore them entirely.

We all know exactly what happens between Carl and ... Laura Linney's character. Does anyone remember her name? I don't. I've always referred to her as 'Laura', and 'Laura' she shall stay. In the scene in which she tells her teddy bear to avert its eyes and Eva Cassidy serenades us as we all weep into our buckets of diet coke, Carl does what no partner should ever, EVER do: cut and run. Oh, great, Carl, definitely stop talking to the woman dealing with a difficult brother. That is exactly what she wants right now. Chastity and isolation.

4. Never buy gifts of a similar size for your mistress and your wife.

Simple really — if you're going to buy gifts for your extramarital partner and very marital partner, then don't make them the same size. Suggest that you almost bought the necklace in the CD-sized box (do these actually exist? Like, actually?), but then you went for the over-sized scarf in an over-sized scarf box. Because then no expectations will be built up, shattered, and mishandled.

Is the most beautiful thing in the world ever the Christmas card Natalie writes for the Prime Minister? The answer to this is yes. It's like a forgotten sonnet, it just is everything that love should be, transposed onto a Christmas card. Or any piece of paper, actually.

The only suitable contest for this prize is, of course, Andrew Lincoln (again, what was his character name? Do we ever find out? Is it Julian? If not, why do I want to say that?) and his silent display of love to Juliet (Keira Knightley). Maybe it's the image of the sarcophagi, maybe it's something else, but, predominantly, it's the handwriting. Just like with Natalie, this truly is from the heart and not from the Macbook. Score one for penmanship.

6. We should be proud of how awkward nudity is.

Martin Freeman. Joanna Page. Awkward simulated coitus. It's the sort of thing Britain just knows how to do. We've all been there as well — in any intimate moment, there is always an awkward moment when your breathing becomes a bit harsher because of intense face-to-face contact or when your leg gets awkwardly stuck and you kind of have to tug it out from somewhere.

We ignore these awkward moments and smooth over the experience, but what these two show is that the awkward part of sex is actually the most romantic part. Three cheers for the big spoons who don't know what to do with their non-hugging arm!

Well, I mean, we all knew that. "Gimme More?" "Hit Me Baby One More Time?" Sounds kind of selfish.

I guess "I'm A Slave 4 U" would be the exception. But then can one really sustain a relationship with someone who promotes text talk?

8. The only universal language is Colin Firth.

Colin Firth's awkwardness is like interpretive dance. His choice of knitwear is like a woolen semaphore we all have a semi for. How the Portuguese maid didn't understand the very obvious signs completely baffles me: if Colin Firth leaps into a body of water, it is not only intensely sexual, but also a sign of great affection when he emerges. That is universally understood Firthian.

Foolish women who haven't watched Pride and Prejudice repeatedly until the VHS wore out should not be allowed to bamboozle the great one with their inferior English-speaking skills. These are most definitely the sort of people who would throw his novel into the lake — a novel inevitably full of bumbling Brits and jumper ekphrasis that goes on for pages and pages about the thickness of the cable knit. Sort of like if Nick Hornby rewrote Proust. Which is definitely what Jamie was going for.

9. The Prime Minister's secretary is a secret fox.

But isn't she though? That short hair, that coy smile, that secret judgment of Natalie's thighs. Prime Minister's secretary — unnamed but unforgettable — is definitely the great love affair we all forget we had watching this film.

Except, perhaps, Colin Firth's girlfriend. She was definitely the most IMDB'd actress in the world this week 10 years ago. She's probably done nothing else, but she must walk into every audition and have people go "Oh, it's you. We know what you did." So, as a result, the secretary really wins here. Why wasn't she the one who Liam Neeson ended up meeting at the end? Sometimes the ending just isn't neat enough.