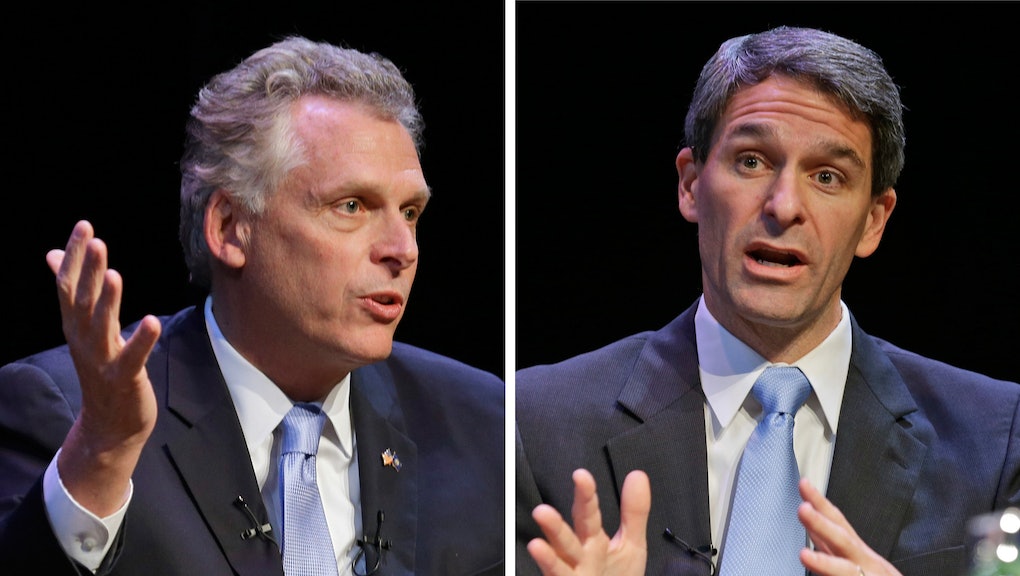 Election Results Virginia: How to Figure Out Who's Winning

There are a number of quirky aspects to Virginia's political culture. For one, the governor is only eligible for a single four-year term. Second, every city in the state is incorporated as what's called an "independent city" — that is, it's not under the control of any county government, making for spotty-looking election maps. And third, returns coming in from the state are notoriously unreliable. The state's southern counties tend to be more rural and conservative, while most Democratic votes come from Richmond and the D.C. suburbs in the north. The southern counties are almost always the first to report.

This has led to lots of confusion so far this evening. It began when the Washington Times opinion editor tweeted the following...

...without pointing out that only 6% of precincts had reported by this point, and that all Virginia elections begin looking like this.

By 8:53, with 74% of precincts reporting, Cuccinelli's lead had narrowed:

And that's when the state's northern counties hadn't even counted the majority of their votes.

This New York Times screenshot taken at 8:54 shows solid red in the south, but at the time of this photo, three northern counties McAuliffe needs to win — Fairfax, Loudoun, and Prince William — had only reported in from 45%, 57%, and 37% of their precincts, respectively. As these counties continue to report their results, expect to see McAuliffe gain ground quickly. Slate's Dave Weigel, who is in Virginia reporting, has some Real Talk for everyone holding out for a Republican victory: