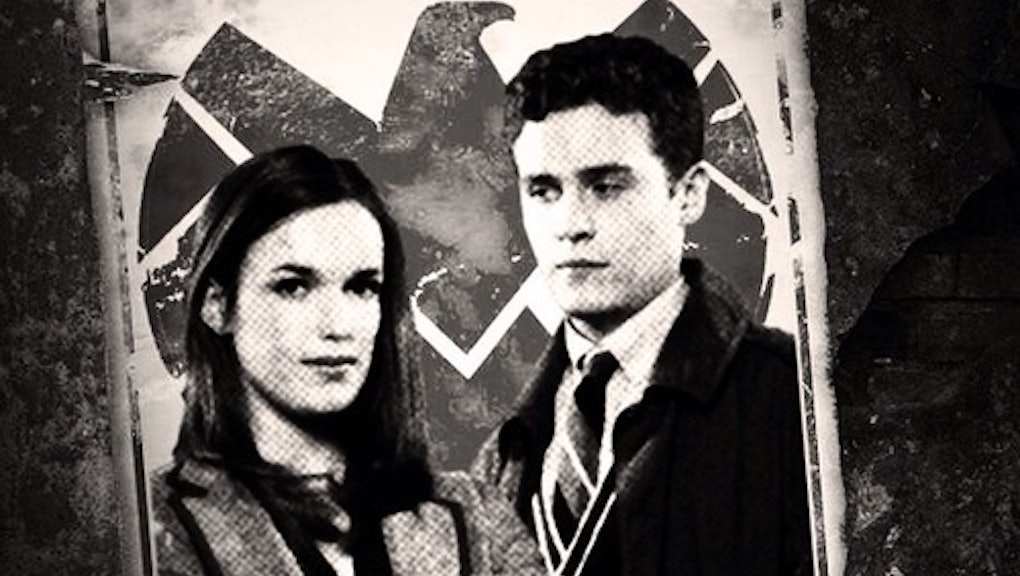 Marvel's Agents of S.H.I.E.L.D. returned this week with a classic ghost story turned murder mystery. After a freak electrical storm, a Boy Scout troupe leader's corpse is somehow left levitating in the middle of the woods.

As the body count rises, the team soon discovers that they're dealing with a threat unlike any other they have faced before: this week's big bad is not a person, but a mysterious alien disease. A group of first-responders to the Battle of New York kept a discarded Chitauri helmet as a trophy, but its original owner was the carrier of an electro-pulse virus that causes infected humans to self-combust.

The who-done-it quickly morphs into a who-got-it as we discover Simmons, the team's resident bio-expert, contracted the alien virus during their initial investigation. Coulson immediately quarantines the young scientist, but he and the rest of the team are hit hard by the prospect of losing a member of the band. Fitz is especially troubled, and he oscillates between the roles of counselor and tech cheerleader as Simmons attempts to develop an anti-serum to cure herself.

Mortality is a big issue in tonight's episode. As Coulson counsels one of the firefighters infected by the alien disease, he tries to find meaning in his own brush with death. Ward lets down his wall for Skye again as he faces his failure to protect Simmons and the others from threats that can't be dealt with through violence. He is forced to confront his duty to eliminate her now that she's a threat to the team. And while Fitz is willing to risk exposure to the virus to aid Simmons in finding a cure, she is willing to make the ultimate sacrifice when she jumps out of the cargo bay so as not the kill the rest of the team when her time is up.

But if you thought Agents of S.H.I.E.L.D. was ballsy enough to kill a main character in the sixth episode, then you're mistaken. And I'm laughing at you.

I'm not mad at the nick of time serum administered in mid-air by a courageous Agent Ward. It was a great way to mix high-impact action into an episode heavy on the feels. And who wouldn't want to be saved by Agent Ward? Sorry, Fitz, I know you made that antidote and all, but you just don't have those heroic biceps.

Easter Eggs: Perhaps reeling from the cancellation rumors sparked by the week-long hiatus, Marvel set the internet ablaze this weekend by announcing that Agents of S.H.I.E.L.D. will feature cross-over content with the upcoming Thor: The Dark World. The November 19 episode will focus on the repercussions of the events of the Thor sequel (making movie-going the opening weekend a must for all S.H.I.E.L.D. fans), with stars from the feature film making an appearance on the small screen. Will Marvel make a trend of these tie-ins, interweaving S.H.I.E.L.D.'s plot with upcoming Phase 2 productions like Captain America: The Winter Soldier, Guardians of the Galaxy, and The Avengers: Age of Ultron? If it translates to a boost in the box office, it seems likely.

What Worked: While the first half focused on a spooky, sci-fi mystery, the episode eventually developed into a pretty solid character-driven piece. The series has desperately needed to develop the characters of Fitz and Simmons ever since their adorkable but indecipherable first appearance in the pilot. Tonight's episode gave viewers a reason to be emotionally invested in these two. Their relationship is obviously sweet, but it's also layered. I don't think either one fully understands the depth of their bond; are they brother-sister besties, or do they give each other the love tingles? And while I was totally rooting for Simmons to #kisshim during her final goodbye with Fitz in the lab, they both displayed sexual tension with the cast major hotties Skye and Ward. Am I the only one hoping this is the start of a burgeoning love quadrilateral?

It was also good to see the show runners cast a spotlight on a character other than Skye. I'm not a Skye-hater (like a little too many folks on my Tumblr feed), but I do think the focus on her character has led to some lopsided character development. Hopefully this show will start to develop as the ensemble drama it was marketed as. And I'm seriously dying to find out Agent May's back story, so let's go there already!

What Didn't Work: We've reached to point where critics have begun to compare the show to other sci-fi series. Will S.H.I.E.L.D. be cancelled like Firefly? Unlikely, though the ratings are dropping, but it's not a good sign when it feels blasphemous to mention the two shows in the same breath.

S.H.I.E.L.D.'s villain of the week premise feels a bit reminiscent of the early seasons of Smallville, which were similarly light on overarching plot. But this format makes fans feel like they aren't missing much when they skip a week or two, thus causing a ratings tank.

Don't get me wrong; not every show on TV has to be Breaking Bad. But viewers need an incentive to tune in beyond "I loved Agent Coulson in The Avengers."

S.H.I.E.L.D. could learn a thing or two from Arrow, which has really hit its stride in its second season. Batman's rogue's gallery is DC's number one asset, and the show producers at Arrow aren't afraid to take advantage of that by incorporating Ra's al Ghul this season. Notice how this wasn't a one time appearance, like the Nick Fury post-credit sequence. Marvel has to find a way to bring the comics mythology into the plot for more than a single line of exposition. There's plenty to choose from — HYDRA, Carol Danvers, and the Superhero Registration Act among others. Marvel just has to commit to one (for now) and delve deeper than they have before to really get the series going.