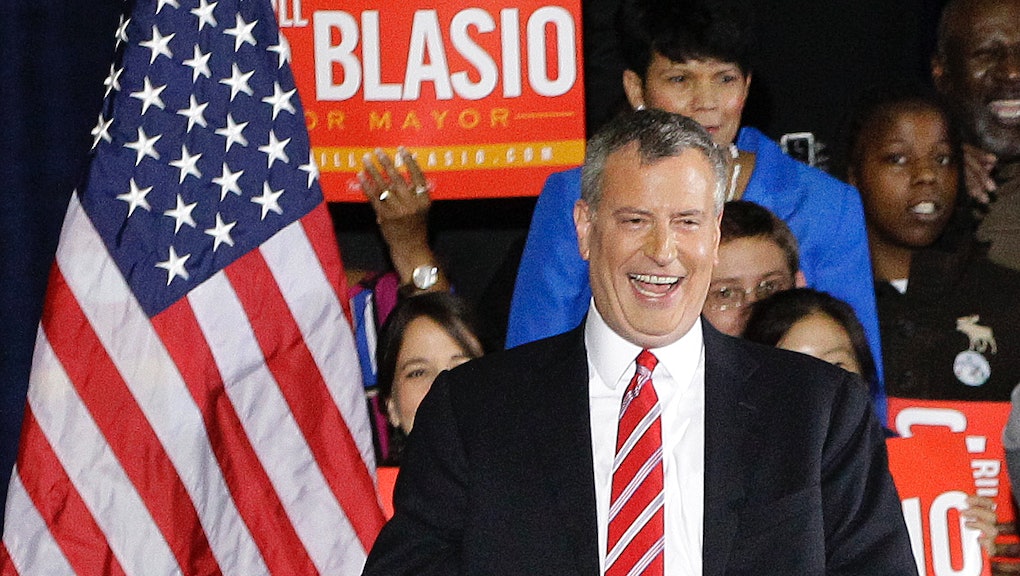 New York City, as any resident can attest, has a distinct personality. It originates from its special combination of local and global, native and jet-setter. As the de facto capital of the Western world, New York exerts a magnetism on the planet's most adventurous, talented, and wealthy individuals, but it’s also home to millions of lifelong residents with a permanent history and identity all their own. To transplants like myself, these native New Yorkers give the city roots without which its world-famous institutions could not exist. Though some of its most elite residents are transplants, New York will never be a transient hub like D.C. or Los Angeles.

In Bill de Blasio, these two New Yorks collide in an interesting way. The new mayor is somewhat a native son, being Manhattan-born and a city resident for the past thirty years. But like millions of his future constituents, and probably the majority of his neighbors in the bourgeois empire that is Park Slope, de Blasio wasn’t raised here: he spent his youth in Cambridge, Mass.

While growing up there, de Blasio acquired an identity trait that would permanently cement his status as a transplant in New York: he became a Red Sox fan.

The man is no half-hearted supporter, either. In his childhood, de Blasio developed a deep love for the whole Fenway-Green Monster-underdog mythos disliked by not just their arch rivals in the Bronx, but if I may say so, most other people in the United States. Upon arriving in New York, he was undeterred. He took his children to Red Sox spring training and “reveled in his pariah status, goading staff members into bets and coming up with new ways to irk colleagues who were of a pinstriped persuasion,” according to The New York Times.

As demonstrated by Tuesday's result, most New Yorkers agree that it’s silly to transpose a leisure-time construct like baseball rivalry onto governance. Bill de Blasio is a qualified candidate (as decades of residence and public service in New York indicate) so his boyhood sports affiliation shouldn’t be an issue. But even though games don’t affect policy, de Blasio’s stand as a Red Sox fan in New York — and his electoral success despite that — are significant in the story that he and his city are going to write together.

Nine big four sports teams call the New York area home, more than any other American city. With them come nine individual, sometimes overlapping fan bases. This collage of identities gives New York politicians the opportunity to make statements about themselves that are fairly specific (as symbolic demagoguery goes) by rooting for certain teams. Mets/Jets fans typically see themselves as scrappy underdogs who will not hesitate to rejoice in “amazin’” or “miracle” seasons, whereas the Yankees and Giants convey affiliation with old-guard, successful institutions. New York transplants desperate to establish themselves will often latch onto the Yankees, for example: witness Hillary Clinton’s miraculous foresight in rooting for the Bronx Bombers while growing up outside of Chicago.

Another Red Sox fan tried to pull off a similar conversion: New York’s current mayor. Despite living near Boston through high school, Michael Bloomberg insisted he was a Yankees fan throughout his mayoralty, convincing no one. His predecessor, Rudy Giuliani, also had a sudden change of heart, supporting the Red Sox ahead of New Hampshire primaries while running for president.

Neither naked attempt for votes won over any hearts or minds. New Hampshirites didn’t want to see New York’s mayor cheering the Sox. Nor would anyone. Phony political “fandoms” like this are cloying and mildly disgusting.

Bill de Blasio’s statement, by contrast, is refreshing. He won’t be the first Red Sox fan in City Hall, but he will be the first to own it. When asked about the Sox in this year’s postseason, he was unequivocal: “Of course I like to see my team win.”

This aligns with the broader identity de Blasio has crafted himself as a candidate: a guy who’s loyal to what he believes in. Joe Lhota’s attacks have failed against precisely this steadfastness. Faced with accusations of communist sympathies and radicalism, de Blasio fired back in defense of his activist past. He comes off as a man confident in his ideals and willing to stand up for them, much like Chris Christie. Boldness is a quality New Yorkers appreciate. After twelve years of Bloomberg’s wilting elitism, a mayor refusing to sell out his despised baseball team may indicate that he'll be candid and steadfast later on, too.

If anything, lifelong New Yorkers should be proud to have a civic environment that can elect someone with an alien cultural affiliation. News channel NY1 asked Bostonians about the chance of a Yankees-fan mayor in Beantown, and one replied, “We are very stubborn people. We would never let that happen here.”

“Personally, I would not vote for a Yankees fan, just on the basis of my team affiliation,” said another.

The sentiment, while no doubt as jocular as the rest of the ribbing between the two teams, is a kind of small-time provincialism that is antithetical to everything New York stands for. It’s a brand of identity politics that New York not only has no time for, but actively spurns.

The truth is, New York has benefited greatly from its openness. As blogger Brian Pisano put it: “When I see a bunch of bros in Red Sox hats spill out of a bar in a drunken haze, screaming 'GO SAWKS,' I realize that New York won. They came to New York for opportunity, for better jobs, for an exciting night life, and they return their hard-earned dollars into businesses all over my city. Sure they can still cling to their roots but these guys are making it in New York City, not Boston.”

The same can be said for de Blasio. His allegiance to the Red Sox is not some light piece of trivia; whether by intention or not, it leverages one of our most recognizable cultural antagonisms to make a statement about the city that he's about to lead, and about the nature of how he'll lead it. In keeping with his campaign's “tale of two cities,” how about this divide: there are those who came here to make it, and those for whom “here” is a home to be fiercely proud of. The two often exist in separate worlds, but in combination they define what makes New York City potent.