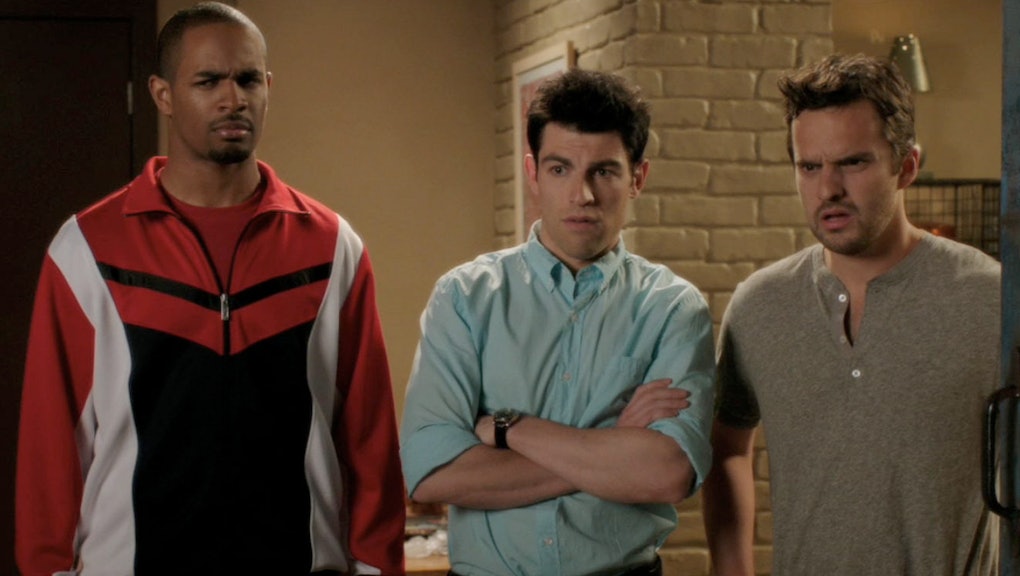 After a week off, New Girl is back with antics galore.

Last night's episode saw the return of Coach (Damon Wayans, Jr.). The original third guy in the loft serenaded a lonely Jess in the pilot episode, and then was never heard from again.

This, unsurprisingly, does not please Jess, particularly because Nick is one of those guys who acts like an ass around certain other guys, and especially around Coach.

"I get it," Coach drawls to a hesitant Nick, "you're whipped."

That could be enough cause for trouble, but when Nick says they haven't defined the relationship yet, Jess won't have it.

Note to Nick Miller: If you have referred to someone as your "old lady" and expressed concern that your sociopathic roommate might attempt to "break (you two) up," you are claiming coupledom. Thus: girlfriend.

And just when you think it can't get worse … "we've never had the seeing other people talk." Miller — you're great, but you're a dumbass.

When the guys go to the strip joint, Jess goes drinking with Cece. Drinking with your girlfriend who has recently been seriously wronged by a guy when you're mad at the guy who is totally your boyfriend (whether you've had the Conversation or not) is just a bad move.

To wit, Cece informs Jess that if Nick is going to play games then Jess needs to play games right back. Playing games is obviously a terrible idea. Such logic, however, eludes Cece, currently in the throes of "men suck," thus motivating her to announce to Taye Diggs that Jess is "free as a bird."

Yes, Taye Diggs, playing a guy called Artie, which does not make him any less melt-your-knickers hot. Seriously, the man said the word "spreadsheets" and it sounded like sex.

Confession:  I wrongly assumed Artie would end up being gay, but in my defense, he didn't bat an eyelash at Jess' "Temple Grandin," a Shirley Temple with coconut rum and a squeeze of lemon. Jess makes no such mistake, however, swooning over Artie's phone number, which is mostly fours (frankly, I think two is much sexier digit, for whatever Dr. Kinsey would make of that), and daring him to lift her (fireman-style, or bench press, we never know).

And while no one is denying that alcohol and boobs are both wonderful things, too much of a good thing — especially on a Tuesday night — is not good for anyone, even Nick and Schmidt, who both want to go home because they are in their 30s, and staying out all night at a strip club just isn't something you do in your 30s.

After an ill-advised drunk dial (drunk dialing is always ill-advised), Nick cuts the crap and tells it like it is: Jess is sexy and sweet, and he needs to go home to her immediately.

This sets off the waterworks for Coach, who was not the dumper in his relationship, but — shock of shocks — the dumped. Everyone with a shred of dignity is embarrassed for the guy because, as in baseball, there's no crying in strip clubs.

To add insult to injury, Coach decides he wants to fight the cop (yes, the cop) for whom his girlfriend left him. ("Hey, did you hear the one about the two black guys and the two white guys who tried to fight a cop?" Winston asks).  Some antics occur that include a slap fight, the use of the word "fisticuffs," a series of junk shots (always funny, no matter how old you are), and, ultimately, the guys running away from the police station.

Back at the loft, Jess, is still hurt by Nick's refusal to call her his girlfriend, and is busy listing evidence of his immaturity, including a note-to-self reading: "Put on Pants?" (Note to self: Write identical note-to-self immediately). Fortunately, Cece comes to her senses and talks some sense into Jess, who has allowed Artie to escort the duo home, under the guise of being a designated driver. Artie, however, got a different memo, and is lounging in Jess' bed, sans clothing.

Of course, Nick chooses that moment to walk in, leaving Jess to ramble an explanation, which includes something nonsensical. It's not important. What is important, however, are Nick's words to Artie: "I'm going to need you to get out of my girlfriend's bed, man."

Jess goofy-grins as Artie points out that his nudity automatically gives Nick the upperhand in any fight, so in the interest of fairness, Nick strips down to shorts and T-shirt.

Later, after the two deposit an unconscious Artie, felled by a single, completely awkward sucker punch, Jess happily points out that Nick did, in fact, call her his girlfriend.

And then she pretty much mounts him as legions of perverted New Girl fans bemoan the fact that the scene only lasts 4 seconds.

We end the evening with the gang gathered around the table, eating copious amounts of dirty-sounding takeout from the Velvet Rabbit, courtesy of Winston's bunny money.