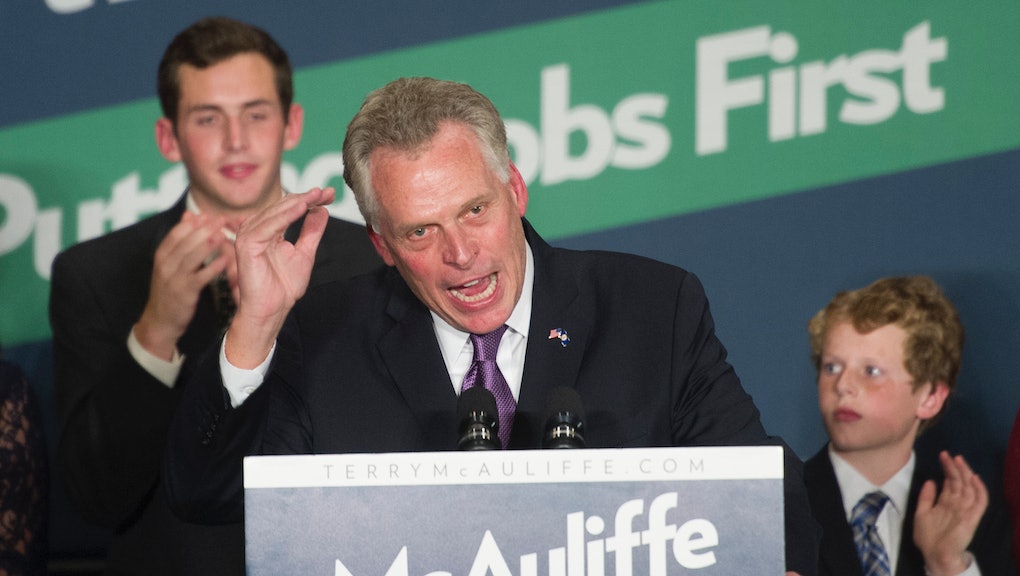 During the 1988 presidential election, a Saturday Night Live sketch featured a debate where Michael Dukakis rebutted one of George H.W. Bush's points by simply saying, "I can't believe I'm losing to this guy!" Ken Cuccinelli, a Republican, must be saying the same thing after losing the Virginia governor's race to Democrat Terry McAuliffe, a candidate so weak that the liberal magazine Mother Jones titled their column about the election, "I Can't Believe Terry McAuliffe Is Going to Be Governor of Virginia."

If a political consultant were to design the ideal candidate to run against, he would look a lot like Terry McAuliffe. No experience in office? McAuliffe's only political experience is as a fundraiser and party chairman, hardly qualifications voters value. Got rich through questionable practices? McAuliffe's real estate firm was investigated by the Department of Justice and his green technology company is under an SEC investigation. Has few ties to the state they are running in? McAuliffe grew up in upstate New York and only got involved in Virginia politics four years ago. Unsavory personality? McAuliffe left the hospital where his wife was giving birth to attend a Bill Clinton fundraiser, and once mused that he would be an excellent pornographic actor.

Yet for all his faults, Terry McAuliffe can now call himself Governor McAuliffe. Voters didn't like him, as evidenced by his unfavorable rating, but voted for him anyways. Cuccinelli can make plenty of excuses for why he lost: he was outspent, he was hurt by the incumbent Republican governor's ethical problems, and the third party candidate blurred distinctions between Cuccinelli and McAuliffe.

All of these are true, but ultimately Cuccinelli lost because swing voters rejected hardline conservatism. Cuccinelli got his start in politics in the staunchly conservative evangelical wing of the Virginia Republican Party, but this shouldn't have prevented him from appealing to moderates. Incumbent governor McDonnell was also a product of evangelical politics, and in graduate school wrote his thesis on why working women harmed society.

McDonnell was able to pivot away from this background and run as "Bob for Jobs," a centrist focused on the economy. Cuccinelli couldn't escape his past. Only 34% of moderate voters supported Cuccinelli, while 47% had backed McDonnell in 2009. Fifty-four percent of women voters voted for McDonnell, but only 42% voted for Cuccinelli.

As with any failed campaign, part of the blame lies with the candidate. Cuccinelli could have been more charismatic, could have done better in debates, and could have run better advertisements. Against an opponent with as much baggage McAuliffe, none of these problems should have mattered. But equal blame lies with the failed political strategies of hardline Republicans. Their failures have created a current political environment where swing voters are extra-skeptical of conservative Republicans.

Virginia voters blamed Republicans for the government shutdown, which 62% opposed and almost one-third said they were personally effected by. Even a year after Todd Akin's comments about legitimate rape and Rush Limbaugh calling Sandra Fluke a slut, McAuliffe was still able to attack Cuccinelli over the so-called War on Women. McAuliffe's advertisements targeted Cuccinelli's crackdown on abortion clinics during his time as Attorney General, and McAuliffe's campaign implied that Cuccinelli wanted to imprison homosexuals. Similar attacks were made against Bob McDonnell, but unlike in 2009 when the Obamacare debate was going on and Republicans were resurgent nationwide, current Republican candidates don't get the benefit of the doubt.

The Virginia election isn't a perfect analogy to the 2014. The electorates will be more conservative than in increasingly Democratic Virginia, particularly in Senate elections in red states like Louisiana, Arkansas, Alaska, and Georgia. But as a Republican, it's a bad day when we can't beat a corrupt carpetbagger like Terry McAullife.