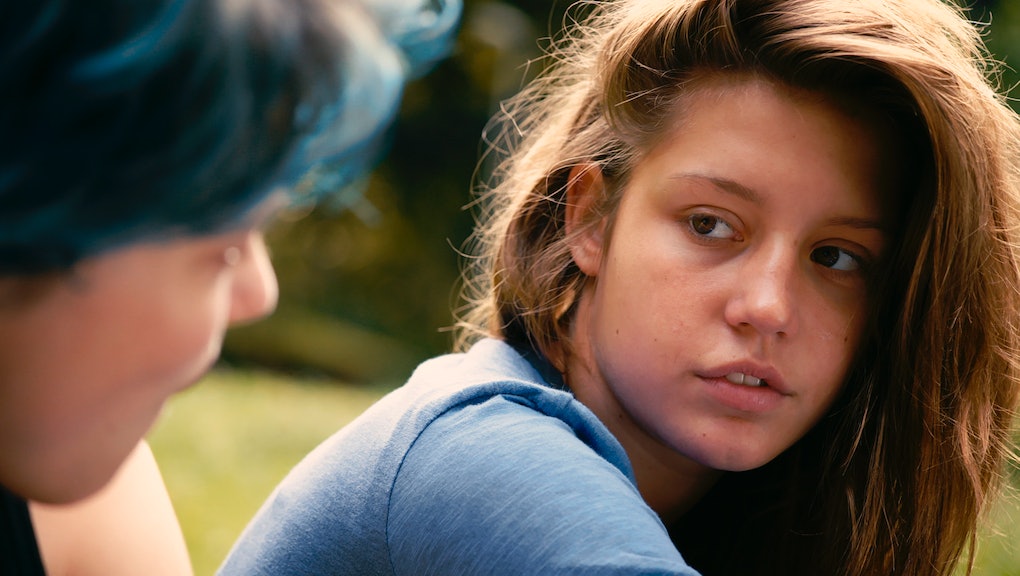 Why 'Blue Is The Warmest Color' Fails At Showing Lesbian Love

Blue is the Warmest Color, the French romantic drama written, produced, and directed by Abdellatif Kechiche, has generated a host of controversy since its win at the Cannes film festival this May and recent October 25 U.S. release. It's the seven-minute-long sex scene between the movie's two stars, Adèle Exarchopoulos and Léa Seydoux, that's generating the most buzz, as well as statements from the two actresses openly expressing dislike for the demanding director. Julie Maroh, the author of the graphic novel from which the film was adapted, criticized the portrayal of lesbian sex.

But what's most upsetting about Blue is the very distinct male gaze behind the camera. It's clear that Kechiche took no pains to remove his male perspective to tell the story of a female, non-heterosexual relationship — a move that ultimately reduces the film to objectification, idealism, and voyeurism. This detracts greatly from its exploration of sexual experiences and millennial frustrations.

The film follows Exarchopoulos and Seydoux as characters Adèle and Emma, respectively, as they dive into a romantic relationship. It's chiefly the coming-of-age tale of Adèle, a 15-year-old with a voracious appetite for all things, who falls for blue-haired Emma, an artist. The film follows their changing sexual desires as they fall in and out of love.

Kechiche has said openly that he meant to portray the female body in an idealized way. In an interview with film website Flicks and Bits, he said, "What I was trying to do when we were shooting these scenes was to film what I found beautiful. So we shot them like paintings, like sculptures. We spent a lot of time lighting them to ensure they would look beautiful; after, the innate choreography of the loving bodies took care of the rest, very naturally. They had to be made aesthetically beautiful while keeping the sexual dimension." But this artistic rendering effectively creates a perspective reminiscent of Lolita: we are not meant to know the characters; we are meant to watch them, to admire them, and to idealize them.

In a scene where Adèle and Emma are walking through a museum, they (and the camera, in close-ups) admire female nude sculptures and paintings. It's hard not to hear English art critic John Berger whispering his oft-cited line, "Men look at women, women watch themselves being looked at." The women in the paintings are being watched by women being watched by an audience, but through a male lens. It's a feeling that envelops the film, creating an overwhelming sense that we are being told how to watch a relationship, one that the director can neither relate to nor accurately portray.

The much-debated sex scene has been discussed frequently for its graphic nature, but its representation of lesbian sex is far off the mark, says Maroh, whose Le Bleu Est une Couleur Chaude inspired Blue. "This was what was missing on the set: lesbians," she wrote after the film won the Palme d'Or at Cannes, also noting she found it "a brutal and surgical display, exuberant and cold, of so-called lesbian sex, which turned into porn." During the screening, "the gay and queer people laughed because it's not convincing, and find it ridiculous, and among the only people we didn't hear giggling were guys too busy feasting their eyes on an incarnation of their fantasies on screen," she said.

The scene sets the actresses more in decorative, artistic poses than in the wild, messy jumble of mouths and limbs we expect. An abundance of scenes feature close-ups, mostly of Adèle, of her face, her lips, her mouth, and her body — the latter often in the repose of the 15-century Renaissance reclining nude. It's essential to her character that we understand her insatiable appetite — for love, for food, for sex — but this excess of close-up shots constructs the dichotomy of sexual objectification and feminine idealism, casting Adèle as both erotic object and mystical goddess. New York Times film critic Manohla Dargis captures this disconnect perfectly in her review (though she disagrees that it's a question of male gaze): "[B]oth the pornographic and the sacred generally treat women as abstractions instead of flesh-and-blood individuals .... Adèle's hunger is contained, prettified, aestheticized."

Photo via You Are Doing That Wrong.

The film's strong male perspective likely was influenced by Kechiche's severe directing style. When asked in a September interview with The Daily Beast about their filmmaking experience, the actresses said it was an abusive one; Kechiche made them shoot take after take of the film's intense scenes (some of which the two women had barely known one another for) and wouldn't stop until it was perfect. Seydoux stated, "It was horrible," and that she would never work with him again; Exarchopoulos, though less extreme in her statements and crediting making the film as "a good learning experience for me, as an actor," attested to its grueling nature, saying she "doesn't think" she'll work with Kechiche again (back-and-forths about these statements have since occurred).

Kechiche has taken pains to make it clear he did not make a political film — "I had nothing militant to say about homosexuality," he said to Flicks and Bits. "I didn't try to define it, and at no point during the process of making of the film did I say to myself, 'Yes, but these are two women…' I felt rather that I was telling the story of a couple" — but the film is inherently about a homosexual relationship. It's this lack of acknowledgement that takes away from the storytelling and imposes his ideals onto Adèle and Emma's relationship. Kechiche wanted to tell a raw, honest, and beautiful story of a couple, but without removing his hetero, male perspective, he greatly hindered the depths the film could have achieved. There's a responsibility that comes with representing both another gender and sexual preference, one Kechiche did not uphold, and one that reduces the film to an idealistic and voyeuristic portrayal of women.