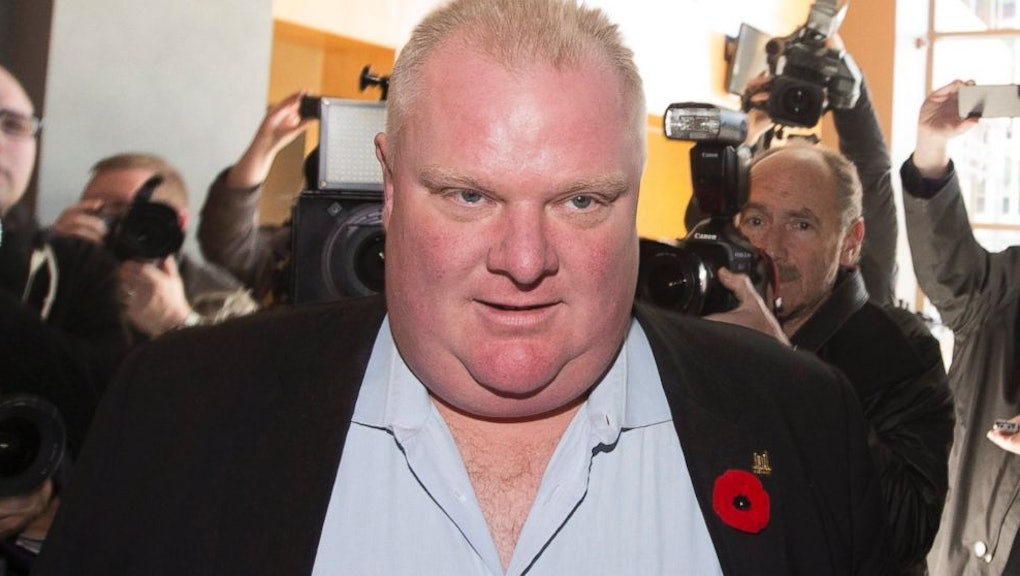 Rob Ford Smoking Crack is Nothing Compared to What U.S. Mayors Have Done

Toronto Mayor Rob Ford admitted Tuesday to smoking crack cocaine after the Toronto police department confirmed they have a copy of a video showing him, well, smoking crack. Mayor Ford then held an impromptu press conference telling reporters that while he may have used drugs in the past, it was probably just "in one of my drunken stupors."

Although Mayor Ford definitely screwed up, he's certainly not the first big city mayor to break the law, so let's all calm down and give Chris Farley's fat younger brother a break. In fact, we here in America have a long, storied history of mayors doing illegal things, shaming their cities, getting thrown out of office, and in a lot of cases returning to office.

So stay strong Rob, and remember that these fuck-ups know what you're going through. You're not perfect, but neither are a lot of other people too, so don't sweat it.

The Washington, D.C. mayor was arrested at the end of his third term in 1990 during a joint sting operation by the FBI and the D.C. police for smoking crack cocaine with a prostitute in a D.C area hotel room. Although Barry's famous defense line, "bitch set me up", didn't stop him from serving six months in federal prison (where he was then accused of letting a woman perform oral sex on him in a prison waiting room), Marion returned four years later to win a fourth term as D.C. mayor.

He is, by the way, still fucking up.

The San Diego mayor recently resigned after being accused of multiple incidents of sexual harassment, including groping, kissing, and making inappropriate comments towards women over the course of his 30-year political career. Some of the women accusing the 70-year-old Filner of harassment included a 67-year-old great grandmother, a Marilyn Monroe impersonator (these exist?), and (wait for it) several members of the U.S. armed forces who had been raped during their service and who Filner met during his time as chairman of the U.S. House of Representatives Comittee for Veterans' Affairs.

The Detroit mayor was a rising star when he was elected at age 31, until he was plagued by a wide variety of political and personal scandals and eventually sentenced to 28 years in federal prison.

In 2002 Kilpatrick notoriously reportedly held a lavish party at the Detroit mayor's mansion where his wife Carlita Kilpatrick physically assaulted a 27-year-old stripper named "Strawberry", who was soon after mysteriously found dead in an unsolved homicide.

Although nothing came of the investigation, Kilpatrick was eventually forced out of office in 2008, after being found guilty of two dozen counts, including racketeering, extortion, mail fraud, and tax evasion.

The Providence mayor was not only one of the longest serving American big city mayors but, like Marion Barry, was one of the only American big city mayors to resign in disgrace and be re-elected for another term. Yay! Cianci's first resignation came (in a possible attempt to imitate Colonel Mustard from Clue) after an assault involving a lit cigarette, an ashtray, and a fireplace log, and the second after federal charges including racketeering, conspiracy, extortion, and witness tampering.

The famous Boston mayor (and kingpin of the Boston Irish Mob) overcame criminal scandals, federal charges, and even jail time, to be elected four times over a 50-year-period, once from prison in 1947.

Ah, a simpler time ... When the voting public readily accepted that their politicians were breaking the law, and were big enough to see past it.

You probably haven't heard of this guy, but you won't forget him. As mayor of Greenbrier, Tennessee, Mayor Wilson stole fistfuls of cash from the Toys For Tots charity he founded.

From November 2005 to October 2013, Wilson robbed the charity of in the neighborhood of $60,000, before he was caught by the Tennessee Bureau of Investigation (which is apparently also a thing). What a scumbag.

Also, pretty sure he's wearing some kind of mayor's uniform in his mugshot.

Okay, so this isn't a big city mayor. But every single mayor of Newark for 46 straight years was indicted on some type of federal criminal charges.

This means that between 1962 and 2006 the mayor of Newark was statistically more likely to commit a crime than ... LITERALLY ANYBODY.

Maybe the sales department at Barney's would have more luck if they started profiling North American mayors instead of black youth?