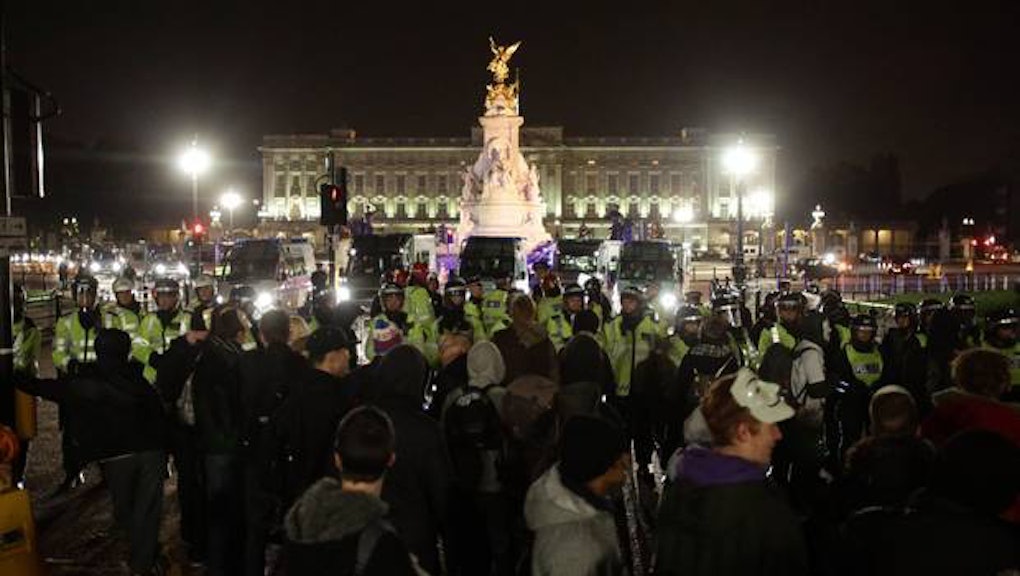 At least 15 people were arrested last night as protesters clashed with riot police on the streets of London. The demonstrations were, in part, inspired by the phrase above, the primary epithet from the 2007 movie V for Vendetta.

Protesters showed up at Buckingham Palace and at least two other monument sites in London sporting Guy Fawkes masks, which were most recently made famous from their appearance in the film. The Guy Fawkes masks are now synonymous with protesting, political change, and specifically the group Anonymous, an online collective of hackers, activists, and "hactivists."

To call Tuesday night's demonstrations a mere performance of fictionalized fantasy would be to overlook the real reason why thousands took to the streets last night. The "Million Mask March," which also occurred simultaneously in hundreds of cities around the world, was in opposition to increased state surveillance practices, government corruption, and austerity cuts. According to Anonymous's Facebook page, the worldwide protests were to remind people "who your enemies are: billionaires who own banks and corporations who corrupt politicians who enslave the people in injustice."

Witnesses reported protesters ripping apart police barricades, assaulting officers, writing on public monuments, and shooting fireworks at Buckingham Palace. London riot police reportedly engaged in forceful shoving matches with demonstrators. One witness saw police pushing back a crowd that had no room to move anywhere, crushing some of the demonstrators. Comedian Russell Brand was involved in the London protests.

One Anonymous member, Sean Rosner of Norfolk, England, said he joined Anonymous because he was arrested under the Computer Misuse Act and spent eight months on police bail recently. "We are here to stand up for what we believe in," said Sean. "To make the world a better place."