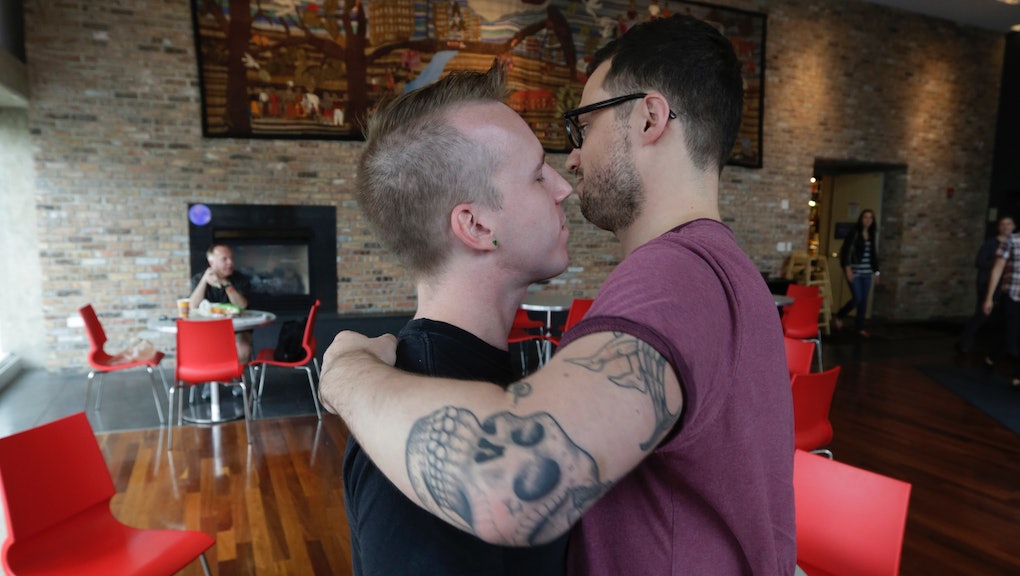 This Poll Shows More Young People Are Homophobic Than Expected

It’s hard to imagine young people wouldn’t get behind banning discrimination in the workplace for LGBTQ employees, given that a majority of us support same-sex marriage. But that may not be the case, according to a poll from last week which found that only 26% of millennials strongly support such a ban.

If you think this finding is surprising, you’re not alone. Most other polls asking the same question have found the exact opposite to be true: that millennials overwhelmingly support a federal ban on workplace discrimination for gays.

So why is this poll going against the tide? You’re guess is as good as mine.

What’s even more shocking is that more respondents identified as Democrats, the party known for having an aggressive LGBTQ-rights platform, than those who identified as Republicans. Like many others, Mark Snyder, the communications manager for Transgender Law Center, said that these results confuse him.

"It’s very curious, and the poll contradicts most previous polls and my own personal experiences," said Snyder.

What isn’t surprising from the new poll is that most Americans think that legislation like the Employment Non-Discrimination Act (ENDA) already exists. This shouldn’t come as news to anyone, given that as of this year a majority of American’s support same-sex marriage and are becoming more supportive of LGBTQ rights in general. And perhaps more young people believe the U.S. has a federal workplace discrimination ban to protect gays because they have the least amount of work experience compared to older generations.

"There’s certainly confusion among the American people and we need ENDA to clear that up," said Snyder.

Shawn Jain, media strategist for the American Civil Liberties Union (ACLU), also said that this poll is questionable and pointed to a poll conducted by Americans for Workplace Opportunity which found that there is majority support nationally for legislation like ENDA.

But the idea that most Americans don’t know gays can be fired in many states is possibly an indicator of how far the country has come in becoming more open-minded about the LGBTQ community. Still, on average 15 to 43% of gay and transgender workers experience some type of discrimination, and 47% of transgender workers say that they experienced an adverse job outcome because of their identity.

Despite this statistic and continued increasing support, the LGBTQ community still has a long way to go before they achieve a level playing field in the workplace. And even though the validity of this poll is uncertain, the confusion that clearly exists among millennials and older Americans alike proves that ENDA needs to become law.