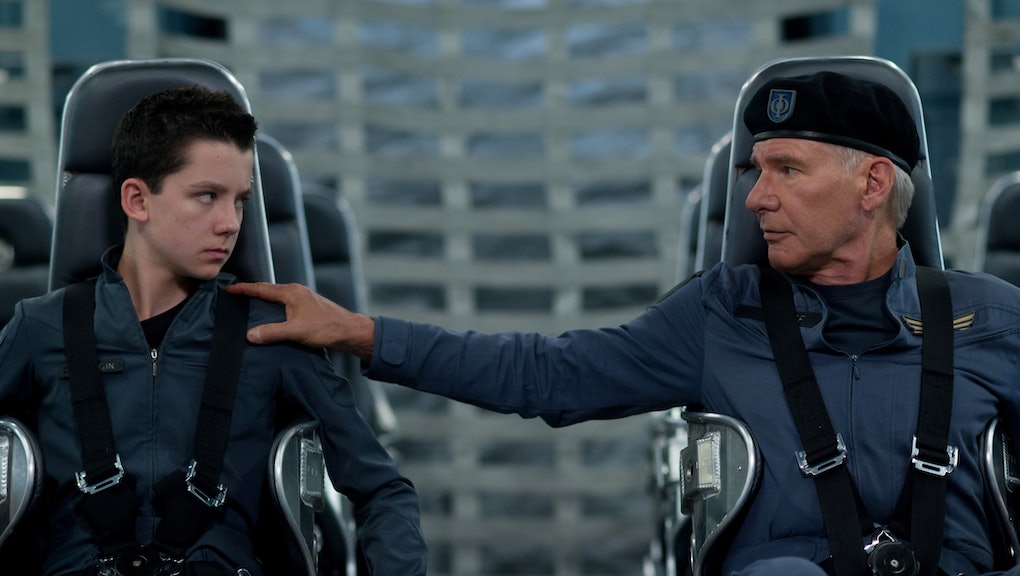 First Chick-Fil-A, then Barilla Pasta, and now the sci-fi flick Ender’s Game. These brands and products have all been the target of boycotts for their connection with opposition to anti-gay attitudes. But while the first two examples drew the ire of gay rights activists for their company policies, it is not Ender's Game that is controversial (in fact, Lionsgate, the film company behind the movie, members of the cast, and director have acknowledged their support for gay rights), but rather the private views of the author of the book on which the movie is based, Orson Scott Card. A group called Geeks Out, the organization behind the boycott, explains, “[Card has called] us sexual deviants and criminals,” and points out that Card sat on the board for the anti-same-sex marriage National Organization for Marriage.

The purpose of the boycott is to “[keep] the money you, I, and our friends work hard to earn from going to Orson Scott Card’s anti-gay activism.” According to TheWrap, however, Card won’t receive any money from ticket sales, as his contract limited his profit to a payment made several years ago. Even though the main goal of the boycott is irrelevant, however, some still might not want to patronize the movie, as high ticket sales could be perceived as passive support for — or at best, apathy — towards Card’s anti-homosexual views.

Given these three recent high-profile boycotts, this is a good time to consider the effectiveness and desirability of boycotts. On the surface, the recent boycotts are acceptable, if not admirable: opposition to same-sex marriage is wrong, as is bigotry, and boycotts are a peaceful, more tolerant alternative to using the government to pressure businesses into abandoning offensive practices.

But there is a potential dilemma with boycotts. There are numerous issues you could boycott, and if we had full knowledge of all companies’ internal practices, associations, and dealings, and if we were serious about not supporting those who do something offensive, many of us would be left with very few options, to the point where such a commitment simply wouldn’t be feasible. So, might we be doomed to hypocrisy if we choose to boycott?

Furthermore, it’s questionable whether widespread boycotting would be desirable. By turning choices ordinarily based on taste and cost considerations into political choices — that is, choices based on views about justice and rights — we risk further eroding what little privacy still exists and creating a hyper-polarized society. If we worry about individuals' ability to compromise and tolerate those with whom they disagree now, what would it be like when every single choice we make is open to (political) scrutiny?

Fortunately, there is an approach that allows us to balance principle with practicality and to avoid unnecessary polarization. First, because it is unreasonable to expect people to know everything about every company they might patronize, we should only accuse individuals of hypocrisy — or perhaps more accurately, lack of integrity — when an offensive practice becomes common knowledge.

To consider how to prevent boycotting from increasing polarization, let’s return to the idea of association: while it’s true that we usually don’t want to associate with someone who consistently offends us, it is likely that our friends do offend us from time to time. Furthermore, choosing your friends based on their political views is a very myopic approach to relationships. Finally, cutting people out of your life with whom you disagree is an extreme move and should only be done in extreme cases. All of this applies to companies as well.

Obviously the relationship between business and consumer is different from the relationship between friends; the former is much narrower, and as a result, offensive practices that occur outside this range carry less weight. With this in mind, and in order to prevent boycotting from unnecessarily adding hostility to our society, we should use a sliding scale of justification. For example, if the product itself is offensive, then the justification for a boycott is strongest; if it’s a practice or policy of the company, there is still a justification for boycotting, though not as strong; and if it is simply the private view of the management that is offensive, then there is the least amount of justification.

Ultimately, in all but the most extreme cases, boycotts are probably best approached as an optional practice — that is, praiseworthy, but not necessary to maintain one’s integrity. Furthermore, we should remember both that people have different sensitivities to a given issue, and association — especially in a consumer context — does not equal endorsement.

In conclusion, a quick word about the effectiveness of boycotting: Boycotting’s main goal is to pressure companies to change a policy through the reduction of demand for their product. This method is unlikely to work except in cases where the practice in question is especially offensive; however, the spread of bad publicity may be enough to get the company to enact change (as in Chick-Fil-A’s case). A nice indirect effect may be a general increase in the belief that the offending view or practice is unacceptable. As for the effect of Geeks Out’s boycott, it’s difficult to tell: Ender’s Game grossed a modest $28 million on its opening weekend, but that could be due to a number of factors.