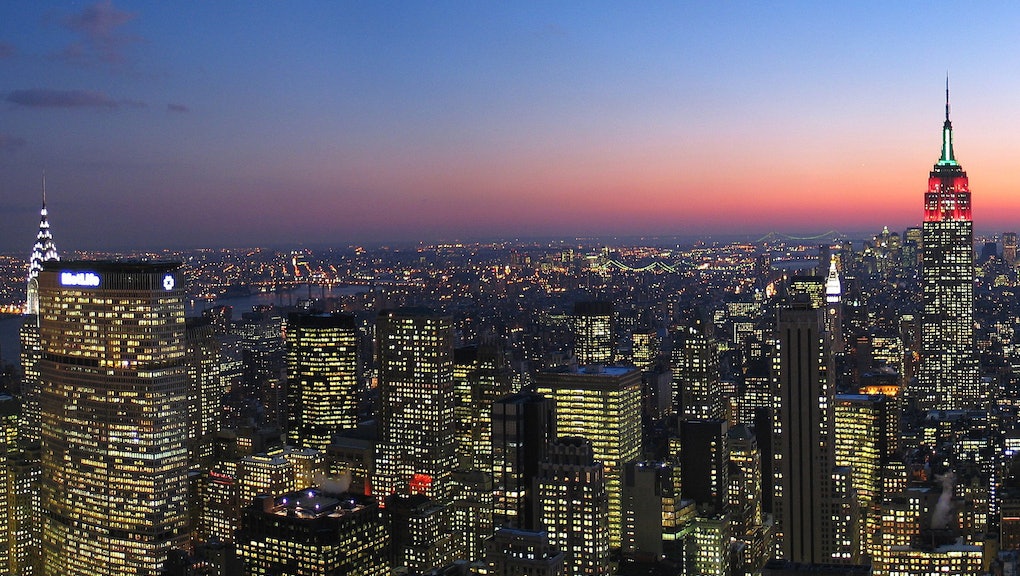 On Tuesday, New Yorkers voted to elect Bill de Blasio, the Democratic candidate for mayor. De Blasio’s epic win puts him in charge of a city poised to succeed on the global stage — if he makes the right decisions while in office.

The past 12 years under Bloomberg have generated dramatic growth and improvement throughout the city. Crime fell to record lows; the city survived several storms and hurricanes and a financial crisis without having to significantly cut back on services like many other localities; and New York is now starting to attract some of the world’s wealthiest to invest in local real estate — or better yet — call New York home and subsequently add to the city’s tax coffers. Bloomberg recognized that New York could not be content to compete just with other American cities, but had to look abroad at London, Hong Kong, Singapore, and Dubai as competitors for both business and residents.

But not everyone has been able to participate equally in the city’s relative prosperity. This discontent, and de Blasio’s capitalization, on it is what brought him to office. De Blasio's "Tale Of Two Cities" was a powerful narrative, albeit a misleading one. Income inequality is very high in New York City, but that is not itself cause for alarm. Rather, the enduring poverty and lack of upward movement is cause for concern. Those unable to work cannot contribute to the city’s economy and tax base. This is a problem that cannot be solved by raising taxes and increasing spending on anti-poverty programs. City money must be spent on intelligently-designed programs that lead to economic growth for all and push New York towards preeminence among global cities.

This past October we saw the federal government shut down because of political gridlock in Washington. Rather than seeing this as an isolated event, it would be wise to assume that increasing political polarization and the accompanying income inequality will only lead to further extremism in politics, and more severe political malfunctioning at the federal level. This creates an opportunity at the local level for super-cities like New York to step up and take the lead. Leveraging its regional influence and economic prowess, New York has the chance to stand out internationally.

The key to addressing local income inequality and competing globally is to focus on economic development. Spending exclusively on social programs to alleviate poverty creates a net loss for the city if those programs don’t help the recipients find work. A growing economy helps everyone and adds to the tax base, which allows for more spending on programs and infrastructure. Education improvement, financial regulation reform, and improved infrastructure is the trifecta that creates a fertile environment for growth.

De Blasio's plan to increase to make public pre-school programs more widely available is a good first step towards improving NYC’s public education, but it is thinking too small. Education in New York City is still quite dismal even though the city spends more per student than anywhere else in the world. The answer isn’t more spending, but rather smarter spending. There are ways to cut costs and ensure that more money is being spent directly on improving students' educations. A city the size of New York needs its education system to be able to run leaner or it becomes weighted down and unable respond to student’s needs.

Likewise, the City needs to prepare students for the 21st century, which doesn’t happen when using an education system designed for the 20th century. We’ve surpassed the Industrial Revolution and are in the middle of the information revolution. It’s important for New York schools to radically experiment with multiple systems in charter schools to find a way to take advantage of the information revolution. This will lead to innovation in education, and ultimately, to more employment opportunities for NYC graduates.

New York works best when it is confident in its role as a dynamic global city that is ever changing and growing. It is difficult to attract innovation and growth from the private sector when the public sector doesn’t allow for growth. Reviewing the city’s vast collection of business regulations with an eye to cutting out unnecessary laws is a good first step. Reviewing the tax structure to remove economic incentives that harmfully distort the market is another good step.

But property taxes that favor single-family homes or don’t penalize vacant lots don’t make sense in a city that continues to grow and attract new residents and workers from all over the world. It’s also not very smart to penalize the City’s wealthy via higher income taxes when they already provide the bulk of both tax revenues and personal charitable donations towards non-profit services. London’s recent reforms in lowering taxes and creating more business-friendly regulation has helped it regain footing as Europe’s premier business and banking capital.

New York may be a global city, but like much of America its infrastructure is showing its age. A drive or train-ride from JFK or La Guardia to Manhattan highlights the poverty of the city rather than its attractiveness. Visitors and tourists must struggle with traffic and outdated transportation systems coming in and out of the City. If New York was a museum of mid-century modern architecture, that would suffice — but it’s not.

Competing for both tourist and business dollars internationally in a globalized world requires keeping an eye on peers overseas — especially in Asia. Take a glance at Tokyo, Seoul, Singapore, Hong Kong, or Shanghai and you will see very modern, efficient, and convenient transportation systems. The mayor should work with the Port Authority and governor to bring up standards across the region.

Infrastructure improvements don’t need to always be lofty or expensive. Simple improvements like Bloomberg’s bike lanes will work. There is no shortage of similarly-needed improvements to the city de Blasio could make; whether it is the need for more public toilets; better signage; luggage check-in depots at Grand Central and Penn Station for flights; or introducing electronic multilingual help/information kiosks in tourist areas.

A system of congestion pricing should also be implemented, charging cars by the zone and time of day and adding surcharges to trucks, which do the most damage to City streets. This would bring in much-needed money that could go towards maintenance and new upgrades.

Bill de Blasio is inheriting a city positioned to surpass all others when it comes to attracting the world's talent, but it will take work and sound policy.