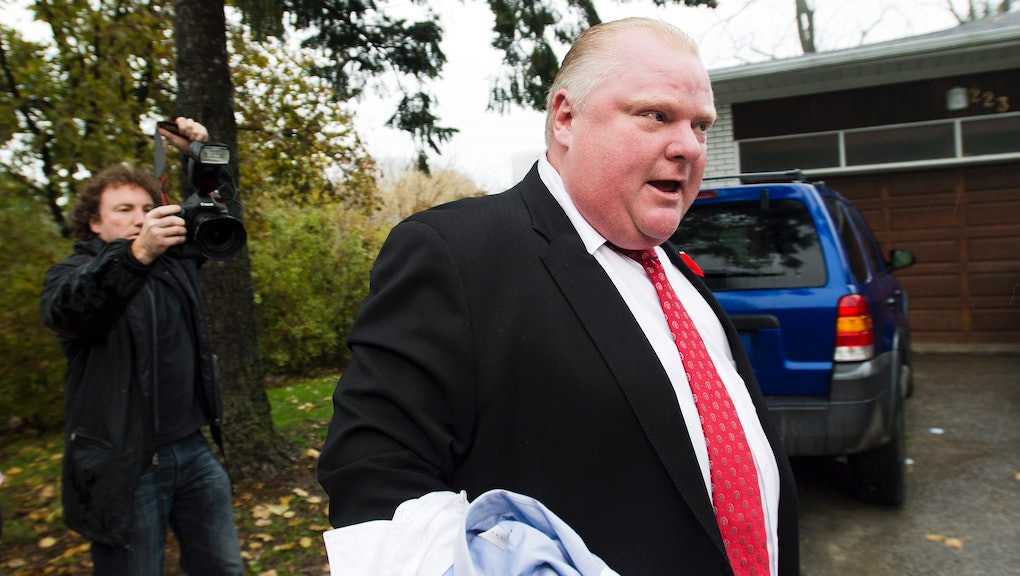 On Tuesday, Toronto Mayor Rob Ford finally confessed to smoking crack cocaine after police confirmed that they are in possession of a video of him appearing to do the same. Back in May, a group of Somali men attempted to sell the video to news agencies, as both the Toronto Star and Gawker reported. (The latter famously, and giddily, created a Kickstarter, dubbed the Rob Ford Crackstarter, in an attempt to purchase the tape.)

As one might expect, in light of the revelations, Ford’s popularity has plummeted, and the mayor has resigned. Ha ha, just kidding! Ford has decided to remain in office, and, bafflingly, his approval ratings are about the same. In fact, according to the BBC, “[A]fter Toronto police announced last week that [the crack video] was in their possession, Ford’s approval rating actually climbed five points to a healthy 44%.”

One could wonder what nearly half of Torontonians are smoking, given that, in addition to hitting the glass pipe, Ford has a reputation as a homophobic, transphobic, racist, ignorant, insensitive, belligerent drunk. Here are my best guesses as to why Ford has maintained so much support. (Presumably, it’s not just that there are some catchy songs about crack out there.)

First off, Ford is clearly a man of the people. Most mayors spend a paucity of their time — if any — in the crack-riddled neighborhoods of their constituents. And fewer still take time out of their day to smoke crack with the citizens of their town! Ford also consorts with (and, presumably, mentors) alleged gang members. Further, Ford, whose heart is clearly as big as the rest of him, may even have picked up the utility bills for a crack house that was down on its luck. While other mayors jet down to their weekend houses in Bermuda, Ford is busy walking the streets of his own town, and getting to know his true supporters. To paraphrase Canadian poet laureate Rush, “What you say about his company is what you say about society.” Ford may get high on crack, but he also gets high on you.

Second, as Ford himself pointed out in his convoluted confession, he was probably smoking crack “in one of his drunken stupors.” If drunk drivers can argue, in a court of law, that their convictions should be revoked because they were too wasted to tell what they were doing, why shouldn’t Ford be allowed to argue that his crack smoking is merely a symptom of his very public love affair with alcohol? Or as Ford himself put it on his Sunday radio show, “I shouldn’t be running around City Hall with, you know, a half-empty bottle of brandy, having a party in my office.” That statement, more than any other, underscores the strain under which Ford has been put. Before this scandal, he was more of an optimist; the bottle of brandy was always half full.

Finally, Ford's intent to remain mayor should be taken as a sign of his dedication to his office, and the party he's having in it. Sure, his behavior may not be in line with the expectations of the post, but where else is he going to violate spending regulations, play grab ass, or have a chauffeur so loyal that he's willing to go to jail for menacing the men holding the mayor's crack video? Ford's decision to remain in office has sent a clear message, and the people of Toronto have responded to it: Ford is here to help, and he does not, in any way, need some help, himself.