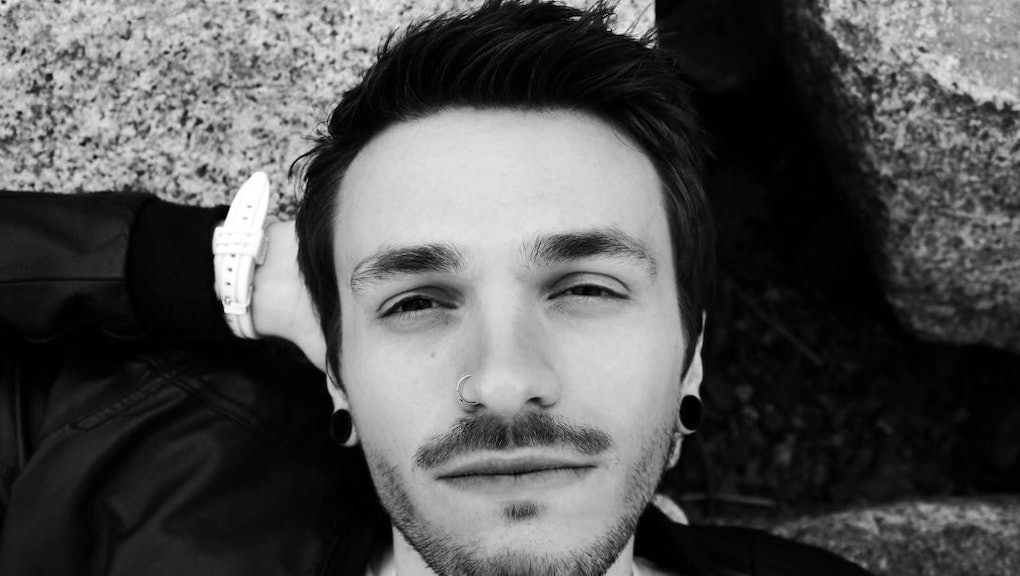 Meet the Millennial Who's Busting Every Stereotype About Atheists

These are some of the words the students of Harvard humanist chaplain Chris Stedman associate with atheists, and they underline the importance of the message in Stedman's recently released book, Faithiest: How an Athiest Found Common Ground With the Religious.

While providing intimate insights into his own spiritual journey, Stedman makes a compelling case in his book for non-religious and religious groups to develop better understandings of each other through interfaith initiatives instead of antagonizing one another. And if you need a reason to listen up, just ask prominent Muslim academic and author Reza Aslan who says, “Faitheist is the perfect book for those seeking a middle path between the firm, opposing certainties of religious fundamentalism and intolerant atheism.”

Last week I sat down with Stedman to discuss a wide range of issues pertaining to religion and atheism today. His words can offer guidance to any young person who is seeking to gain a better understanding of religion.

Stedman cites his personal experiences as a reason why he came to seek “common ground” between his beliefs and those of religious people. Growing up in a non-religious family, Stedman recounts how he had a religious experience at the age of 11 that prompted him to convert to Christianity. While studying religion in college, however, he had a crisis of faith.

“I was challenged by my Christian professors to think deeply about what I believed in and why,” he said. “In doing so I realized that I had converted not because I thought that the metaphysical claims of Christianity were true, but because I wanted to be part of a moral community, ...a community that cared about justice. And yet I realized that, for me, the claims of Christianity did not seem true.”

Nevertheless, he admits that, at the time, he knew little about religious people and their beliefs. He alludes to a missed opportunity in the past to fully engage with a Muslim woman who confided in him about her fears of wearing a hijab in public. He in turn revealed to her his anxiety about holding hands with his boyfriend in public, and recalls how she asked him “without a shred of judgement in her voice” about what he did in those moments. Feeling unable to have that conversation, he changed the subject.

“Over time I began to look at failed interactions such as that as missed opportunities to be enriched, and to educate,” he said with regret. “So I decided I wanted to take another look at religion and see if I could find ways to build understanding between faith communities and non-religious people such as myself in a world that is fixated on a narrative of conflict.”

Considering the oddity that some might find in his objectives, I asked him whether building bridges between non-religious and religious groups was somewhat counterintuitive to being an atheist.

“The way that atheists are portrayed in the media is often as combative, as focused solely on seeing an end to religion,” he said. “The general assumption is that the atheist is not interested in dialogue but in monologue, and to only lecture believers rather than listening to them. The idea of an atheist seeking mutual respect and greater understanding with people of faith may be seen as counter-intuitive, but I don’t see any reason why it should be. I think it has a lot to do with the way atheists are portrayed more broadly”.

So how do religious groups see his desire to include atheists in interfaith dialogue? “The general response to the idea of including atheists in interfaith dialogue, from interfaith proponents and from the majority of religious communities that I have encountered, has been very enthusiastic,” Stedman asserts. “I think there is recognition among many communities that atheists have something distinct to contribute to these discussions.”

Nevertheless he admits that one of the biggest obstacles he faces is the negative perception of atheists amongst mainstream faith groups. Yet he remains defiant and feels strongly that atheist voices should be heard next to religious ones.

According to Stedman, one of the biggest misconceptions that religious individuals have of atheists is that, without religion, they adhere to no moral system. Stedman emphasizes that “this [misunderstanding] underscores the real need for more dialogue between religious and non-religious communities to destigmatize these groups to one another.” However, he highlights the vital importance of belonging to a community.

"One of the things religious people often have that non-religious people frequently don’t have is institutions that bring these people together for these conversations” he said.

"I think that Humanist communities can create opportunities for non-religious people to think more deeply about their values and lives, and enter into discussion with religious communities that lead to opportunities to work together for the common good."

Especially in the aftermath of 9/11, atheists who decry faith as an agent of violence have directed a great deal of hostility towards religious communities. Prominent atheist authors and academics such as Sam Harris and Richard Dawkins have a major factor in arguments like this entering the mainstream discourse surrounding religion.

Stedman said such analyses “sometimes reflect a narrow understanding of human psychology and also the role that religion plays in people’s lives.”

“When I hear people say that religion is responsible for violence, I think of a popular quote by Steven Weinberg on religion: 'With or without it you'd have good people doing good things and evil people doing evil things. But for good people to do evil things it takes religion.”

Stedman asserts that such a perspective “neglects to account for the reality that religious beliefs have been cited in both bad and good actions throughout history. Surveying media reports on religious conflict I can understand why people would make a link between religion and violence. But in my mind the underlying issue is not religion but extreme tribalism; the sense that we define our in group in contrast to the out group and demonize those we see as different from ourselves."

"But this phenomenon is not exclusive to religion, and the research on suicide bombings has shown that coalitional commitment is a positive predictor for suicide bombing support, rather than religious devotion. Interfaith work seeks to increase understanding in order to challenge this kind of extreme tribalism.”

He cites the famous example of the Tamil Tigers to affirm his point. Stedman refers to the work of University of Chicago academic Robert Pape. Pape's study on the phenomenon of suicide bombing showed the Tamil Tigers have been responsible for more suicide bombings than any other group since the 1980s. Their aspirations were nationalistic and secular, and had little (if anything at all) to do with religion.

This association of violence and other negative stereotypes with religion often leaves a bad impression on young people, and it is frequently assumed that members of the millennial generation are more and more likely to turn away from religion than their elders.

“I am actually pretty skeptical of the claim that people are leaving organized religion because they do not believe,” said Stedman. “In fact, a significant majority of the population still claims to believe in god or a religious spirit. Only about 12% of the non-religious define themselves as atheists. Pew has also found that millennials are fairly traditional in their religious beliefs and practices. Millennial beliefs about heaven and hell, for example, are quite similar to beliefs of older Americans.”

Stedman emphasizes that the supposedly low number of religious millennials has more to do with the “rejection of institutional religion and the political role it has played,” rather than a lack of belief. As per Stedman’s research, “About 70% of non-religious American millennials believe in a god or a universal spirit.”

While many millennials say they don’t necessarily subscribe to an organized religion, they do admit to being deeply spiritual.

"What does spirituality mean for millennials in five words?" I asked Stedman.

“That is an impossible ask,” he said in exasperation, chuckling at the thought. “And the reason it is an impossible ask is because I think there as many definitions of spirituality as there are millennials. I think that’s why these discussions are very important, because we think we are talking about the same things but we really are not.”

“When I hear this question it makes me think about how we need a lot more discussion about religious literacy because every person I know would answer this question differently.”