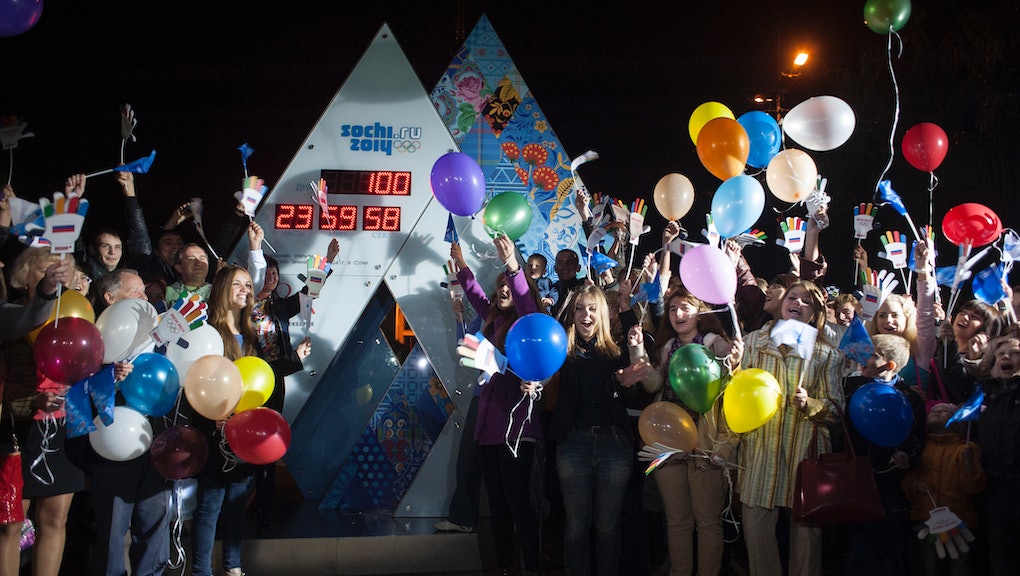 Putin Says the Olympics Will Be Safe From Discrimination, But Here's Why I Don't Believe Him

The United Nations got together yesterday to adopt a resolution calling for a world truce during the Winter Olympics kicking off in Sochi, Russia in exactly three months. This has become a tradition over the past 20 years --- a symbolic gesture in the months leading up to the games. For the first time, however, it called upon the host country to "promote social inclusion without discrimination of any kind."

Obviously a thinly veiled reference to the overtly anti-LGBT legislation Russia passed back in June. The vaguely worded ban on "gay propaganda" aimed at minors has sparked outrage across the world, with some activists calling for a boycott of the games.

But have no fear --- Sochi Games chief Dmitry Chernyshenko, present at the UN, reminded us all that President Putin has repeated "three times" that there will be "no discrimination".

While you will forgive me for reserving my judgment on that particular guarantee for now, it is worth noting what was not mentioned in the resolution and what we were not given any assurance about. The right to freedom expression --- or rather lack thereof --- stands at the core of this issue. Since the law came into power, LGBT protesters have been attacked and arrested. Authorities have warned that spectators and athletes can be fined for “gay propaganda”, like displaying rainbow flags.

I don't know about you, but to me that seems to fly in the face of the the universal human right to freedom of expression and assembly. But maybe it was simply an oversight, and this is next on the agenda. In which case, I've got a few suggestions on where to start.

For one, there are currently 28 Greenpeace activists and two journalists under arrest in Russia. They were staging a peaceful protest by a Gazprom oil rig on September 18, when their ship was boarded by Russian security forces. They are currently detained in a prison in St Petersburg. Initially held on piracy charges with a potential 15 year sentence, they have now been downgraded to hooliganism. This could still mean up to seven year in jail. Again, that’s for a peaceful protest.

Then there's the case of the TV crew from the Norway’s Olympic broadcaster TV2. While filming a recent report in Sochi, they were taken into custody, interrogated, harassed and denied contact with the Norwegian embassy. The journalists were also told that they were now ‘blacklisted’. Not very encouraging to hear if you're a critical foreign reporter heading to Sochi in February, never mind a member Russia's perpetually repressed independent press.

And of course, you can't talk about freedom of expression in Russia without mentioning Pussy Riot. Two members of the feminist punk group have been in prison since February 2012. The latest news was the apparent disappearance of Nadezhda Tolokonnikova as she was moved between prisons. This came after the Guardian published an open letter  where she detailed the horrible conditions they were being held under. It soon emerged that she might be, like in some sort of Soviet nightmare, sent to Siberia.

One of the fundamental principles of the Olympics deals with “preserving human dignity”, and there is no doubt that freedom of expression is a pretty big part of that. Rather than listening to Putin's empty promises, we should be measuring up Russia's commitment to "human dignity" where it counts.