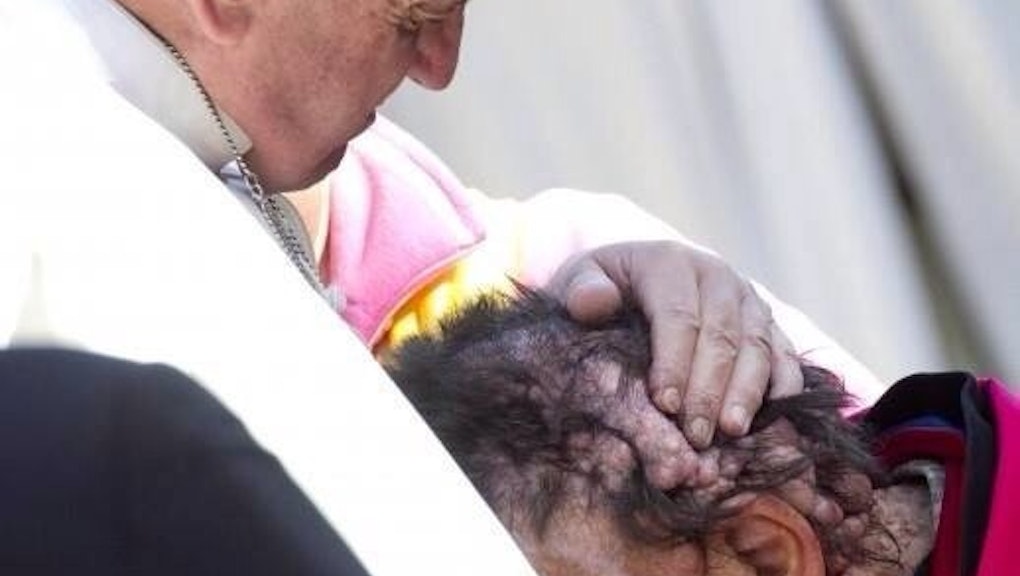 Pope Francis Praised For Embrace, But Should He Be?

On Wednesday, Pope Francis caused followers around the world to rise up in his praise after he treated two disfigured pilgrims — one of whom appeared to have neurofibromatosis, and the other of whom had an unidentifiable skin condition — like regular human beings, just like everyone is supposed to do, all the time.

The pope spotted the men during his weekly audience in St. Peter's Square. Rather than shrieking like a frightened animal, poking them with a stick, scream-asking what was wrong with them, and turning tail and running away, pontifical vestments flailing in the breeze, Pope Francis embraced the two men in question, much as he has done in the past with his many non-disfigured adherents. While the Pope had several options for how to react to the men — a four-year-old might have pointed and stared, causing its embarrassed parents to apologize, and an ignorant and inebriated frat boy might have loudly declaimed how "grody" he found the men’s faces — Francis, in a decidedly papal move, placed his hands on the first man’s face, kissed him, and blessed him.

A photo of the pope hugging that man has since gone viral, and continues to be shared and retweeted by moms around the world. They reportedly plan to emulate the Pope's example by donating some spare change to a panhandler, or not getting as frustrated when someone takes the parking spot they've been eyeing  — unless, you know, they’re in a rush or something.

The Argentinian pope’s powerful act has led to comparisons with his namesake, St. Francis of Assisi, the mendicant friar who preached a gospel of compassion and founded the Franciscan Order, and to Mother Theresa, the nun who founded the congregation Missionaries of Charity, and dedicated her life to ministering to lepers, orphans, the disadvantaged, and the dying in Calcutta, India.

Pope Francis, born Jorge Mario Bergoglio, is widely considered to have set a new tone for the papacy, as he chose to live in humble lodgings, abandoned dressy attire, drives his own modest popemobile, punished a German "Bishop of Bling" for building a lavish $43 million residence, advocated for the inclusion of women in church decisions, and advised against the judgment of homosexuals. The Catholic community has received him favorably since he was elected by the papal conclave in February, replacing showy dresser and creepy Emperor Palpatine lookalike Pope Benedict XVI, whom nobody really liked.

While we can likely expect further acts of common decency from Pope Benedict, it's unclear what they will be, and whether there will be shareable photos of them.