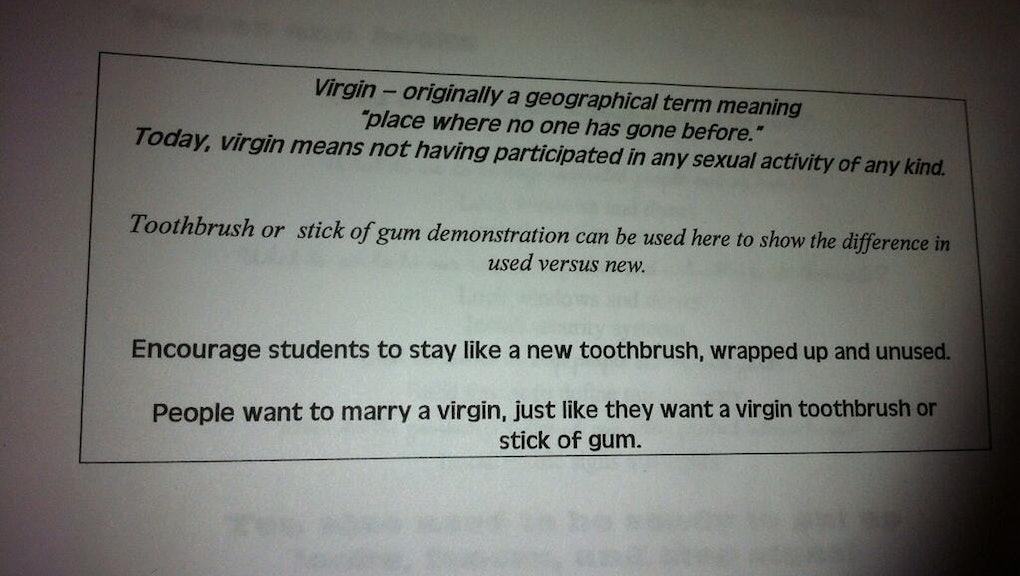 Many parents in Texas' Canyon Independent School District were alarmed this week to find out that the "human sexuality instruction" program taught at local middle and high schools compared people who choose to have sex before marriage with garbage. Although the curriculum materials for the "Reality Check" program are not sent home with students, one mom visited her child's school and found distressing instructions for sixth graders: that "People want to marry a virgin, just like they want a virgin toothbrush or stick of gum."

In the views of many community members, this teaches students that "their worth is synonymous with their level of sexual activity," implying that "Anyone who has sex before marriage is undesirable, worthless, and disposable."

Abstinence-focused sex education is common practice in the American public school system, with 26 states requiring that public school instructors stress abstinence in their sex ed programs. Alarmingly, only 19 states require that sex education be medically or factually accurate. Studies have shown that abstinence-based programs do not actually affect students' likelihood to practice abstinence and are correlated with both higher teen pregnancy rates and higher incidence of sexually transmitted disease.

The toothbrush/gum analogy represents a new low in abstinence-based sexual education. The message that sexually active, unmarried people are conceptually equivalent to discarded trash will not be lost on impressionable adolescents. By excessively stigmatizing particular decisions, the "Reality Check" program fails to foster a safe environment for teens to discuss the choices associated with sexual activity and how to make them responsibly. Moreover, the metaphor has deeply problematic implications for rape victims and teaches that being sexually assaulted amounts to a depreciation in one's value. Rather than use demeaning and downright hurtful analogies to instill fear in students, sexual education programs must direct teens through healthy, fact-based conversations about their sexual health.