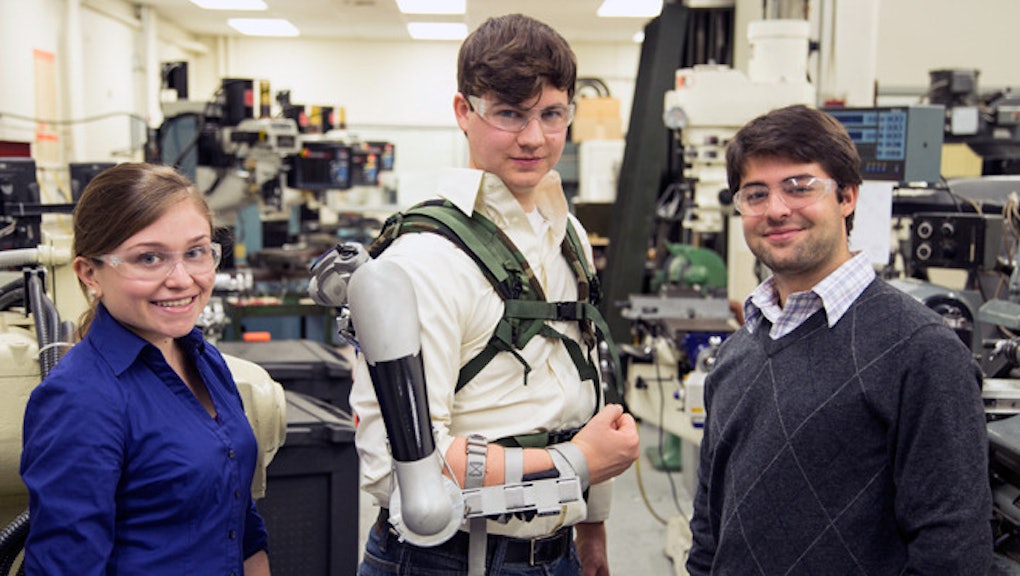 The Titan Arm Gives Its Users a Boost Of Super-Strength

Those of you who've seen the film Elysium are familiar with the concept of high-tech exoskeletons. The Titan Arm is a breakthrough upper-body exoskeleton developed by a group of students at University of Pennsylvania, which proves Hulk-like super strength to its wearer.

Student inventors from UPenn — Elizabeth Beattie, Nick McGill, Nick Parrotta, and Niko Vladimirovm — have won the 2013 James Dyson award for their effort with the Titan Arm and were awarded $45,000.

The Titan Arm is not the first working exoskeleton, and the team started their research last year by closely studying other examples of exoskeleton tech. One of those was a project out of Tokyo that used pressurized air to drive the super strength powers. That, however, required that the exoskeleton remain tethered to a pneumatic pump, a severely limiting requirement. The students started thinking about the benefits of a totally independent, battery-powered exoskeleton that could be worn freely.

The Titan Arm focuses on a single mechanized joint — the elbow — giving the user a 40-pound boost in strength. The team settled on a cable drive system which works similarly to the brakes on a bike. The arm draws power from a battery pack that could be worn on the back, thus allowing for the mobility they'd set out to achieve.

Apart from various sci-fi/super power implications, the Titan Arm has present day, real world application for physical therapy. The technology has the potential for in-home rehabilitation and rebuilding strength in injured patients' arms. The inventors hope to improve their invention with the prize money, adding a second powered joint.  With two points of actuation, for example, the team could measure resistance to see how those joints are being used, in effect quantifying the process of recovery.

James Dyson, the serial inventor after whom the annual award is named, loves the concept:

"Students naturally want to do projects that are worthy. And I mean that in a very positive way. The first three winners this year were all people trying to help other people. I think that’s a great characteristic of all student projects. They’re people who want to change the world and make the world a better place. Often they’re not thinking commercially. Which is great, because companies think commercially. Students don't."