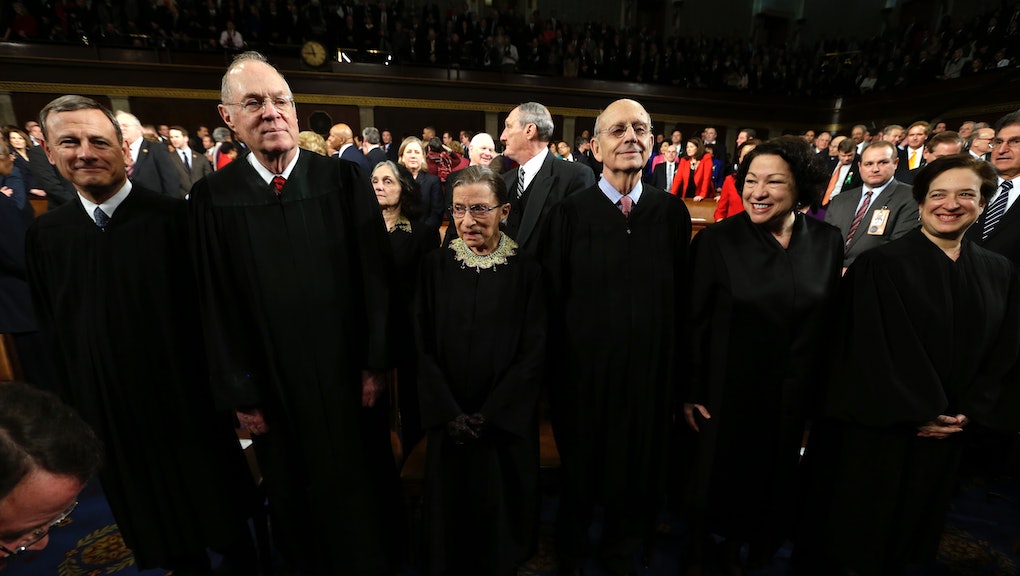 The central question posed by Town of Greece v. Galloway, which was argued in front of the Supreme Court this week, mischaracterizes the legitimate objection that secularists have to state-sponsored demonstrations of religion. The two petitioners, Susan Galloway and Linda Stephens, brought their legal action as part of an activist campaign to assert, and then entrench and fortify, the line between church and state. This righteous goal would have been well served had their case's central question addressed the legality of a town board soliciting religious prayer, which is a question the Supreme Court has, to date, skirted.

I'm convinced they acted out of this motivation, but for some reason they built their case around a nonsense claim of being offended at the explicit Christianity of the prayers. This grievance, which is nearly provably phony, did nothing but obscure their true, righteous principle — the separation between church and state derived from the First Amendment's Establishment Clause — and degraded the question to one of diversity. Both the case and the precedent it promises are consequently feebler.

The controversy centers on the tradition that commences official board meetings of the elected government of the town of Greece, N.Y. "At least 30 minutes" before the actual meeting begins, the board hears a religious prayer written and delivered by local clerics asking for guidance and wisdom. The "moment of prayer" is on the official agenda. For the two petitioners, this was grounds for complaint.

Linda Stephens is the vice president of her local chapter of Americans United for Separation of Church and State. When she and her co-petitioner filed suit over the opening prayer, they would have been wise to stand on principles informed by that organization's mission statement: "The constitutional principle of church-state separation [is] the only way to ensure religious freedom for all Americans." It's also the only way to keep secular Americans from being involved in the very concept of deific law, which is antithetical to a model of justice that relies on a jury of one's peers.

As stated in the opposition brief, "The question presented by the petition is whether … the town board exploited its prayer opportunity to advance one faith to the exclusion of others." Or as scotusblog.com puts it, "Can government knowingly take sides in a matter of religious belief or practice?" It's a remarkably uninteresting question when considered from the perspective of, say, the aforementioned Americans United for Separation of Church and State, which is presumably a perspective shared by Galloway and Stephens.

Greece misses a chance to clarify precedent set by 1983's Marsh v. Chambers. In that case, the Court recognized "legislative prayer" (specifically, the public salary of a legislative chaplain) as legal so long as it was primarily ceremonial, traditional, and didn't "proselytize [or disparage] any one … faith or belief."

But as Justice William Brennan noted in his dissent, that answer didn't address the important question: should religion belong in the town hall, taxpayer-funded or not, at all? "The Court is carving out an exception to the Establishment Clause, rather than reshaping Establishment Clause doctrine …. If the Court were to judge legislative prayer through the unsentimental eye of our settled doctrine, it would have to strike it down as a clear violation of the Establishment Clause."

In other words, on the matter of legislative prayer, we still don't know the Court's opinion on whether the First Amendment's instruction that "Congress shall make no law respecting an establishment of religion" refers to government not establishing one particular religion or, as Justice Brennan argued, a prohibition on establishing the specter of religion itself. Unfortunately, that decision will have to wait.

Instead, we have this: "This case is about Christians aggressively imposing themselves on their fellow citizens with the power of government," said one attorney for the plaintiffs. To which the town, upon Galloway and Stephens's complaint, responded with a parade of Jewish, Ba'hai, and even Wiccan prayers. So much for the imposition of Christianity.

The problem with claiming offense at hearing something is that it can be solved by not hearing it or by hearing something else. Hence, the 30-minute separation between the prayer and the meeting becomes relevant, as are the "various faiths" represented, as is the board making known that meeting attendees were free to not participate in the prayers.

Worse yet, the facts of the case evince that the petitioners picked the fight for its own sake. By their own admission, Galloway and Stephens had no other reason to attend these board meetings: "The respondents have no standing to assert the interests of children or police officers or award recipients or permit applicants. They don't even claim to be in any of those categories," said their Thomas Hungar in Wednesday's argument. With one exception, they appeared at the meetings only to register opposition to the opening prayer. They were right to do so, but their objection rests much better on the grounds of principle than the claim of "offense" that too often misdirects these discussions of religion.

"We should assume," said Justice Scalia, contributing to a thought experiment posed by Justice Kagan on Wednesday, "that [after a town hall opened their meeting with a Christian prayer] the next day, before the same committee, a Muslim would lead the invocation, and the day after that an Orthodox Jew. I mean, it makes a difference whether it's just one denomination that is being used as chaplain or open to various denominations."

No, it doesn't. It matters that religious invocations have a place at an American town hall meeting, not that religions besides Christianity are also represented. Sadly for the proponents of secular government, Scalia was not the one who misconstrued this particular question before the Court. That confusion was provided by the petitioning parties.