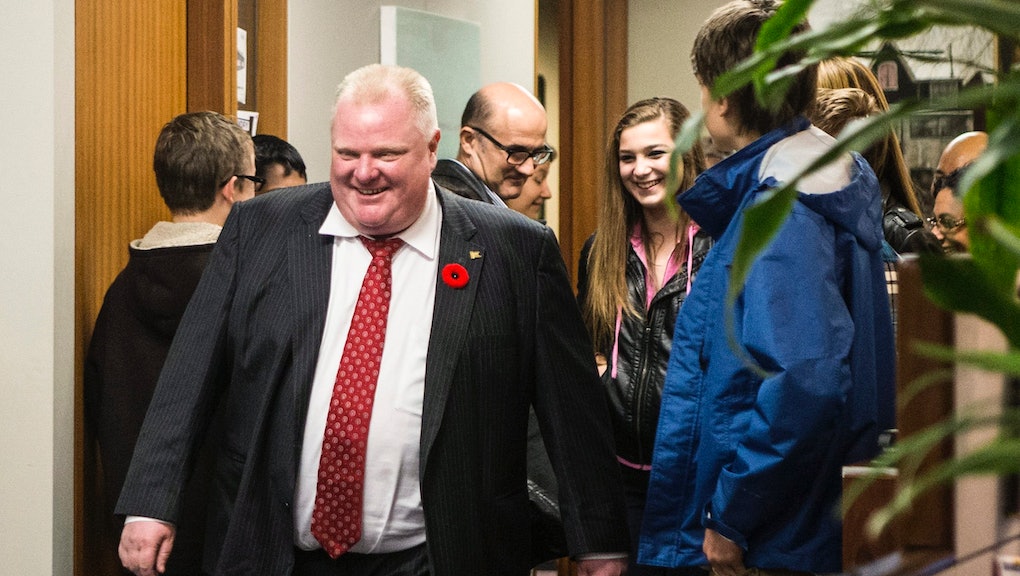 Rob Ford is a perfect mayor: loyal, honest, altruistic, frugal, and friendly. If only we had more mayors like this, instead of the typical, boring, out of touch kind of politician that we’re all too familiar with.

What’s endearing about him is the fact that he’s like the rest of us: a bunch of hayseeds, parents, rubes, and posers pretending we know a thing or two about a thing or two. Ford has proven what I personally have always believed, which is that the more honest, open, and friendly you are to everyone, the better a person you’re perceived to be. However, Torontans disagree, with a new poll showing that 60% of them want him to resign after admitting that he smoked crack cocaine.

Come on, people! This is the politician you’ve been waiting for! A real "man of the people" type. Let me give you five solid reasons you should all light the crack pipe of solidarity for Rob Ford and stop this crazy witch-hunt.

Luca Brasi, as we all know, took a piano wire around the neck for Don Corleone in The Godfather. If that isn’t loyal, I don’t know what is. But Rob Ford espouses this same type of devotion to his people, and simply refuses to leave office amidst all this hullabaloo.

He’s round, red-faced, and deals with personal demons like the rest of us. Who doesn’t have someone in their family like that? Like a wily uncle, estranged sibling, or crack-smoking teddy bear that likes to bet hookers they won’t take a sh*t on the floor?

Nobody knows how to keep their cool like Rob Ford. Amidst racism, drug, alcohol abuse, and all kinds of other accusations, Ford hasn’t lost his patience, not even one time! Who wants a mayor who’s going to hack through the door of the state house with an axe in the middle of a budget battle?

He kisses babies, returns phone calls, loves his kids, and he’ll dress like a ninth century court jester just to get a laugh! Ever thought your neighbor, best friend, cellmate, or registered sex offender uncle might make a good politician? Have them flip through Rob Ford’s book on congeniality!

If anyone knows culture, it’s Rob Ford. He can be Canadian, American, black, white, and even Jewish. This is a man who doesn’t balk at new experiences, new foods, or growing pe’ots. That means he can integrate fully with any community and really put his ear to the rails to get the vibration of what makes Toronto tick.