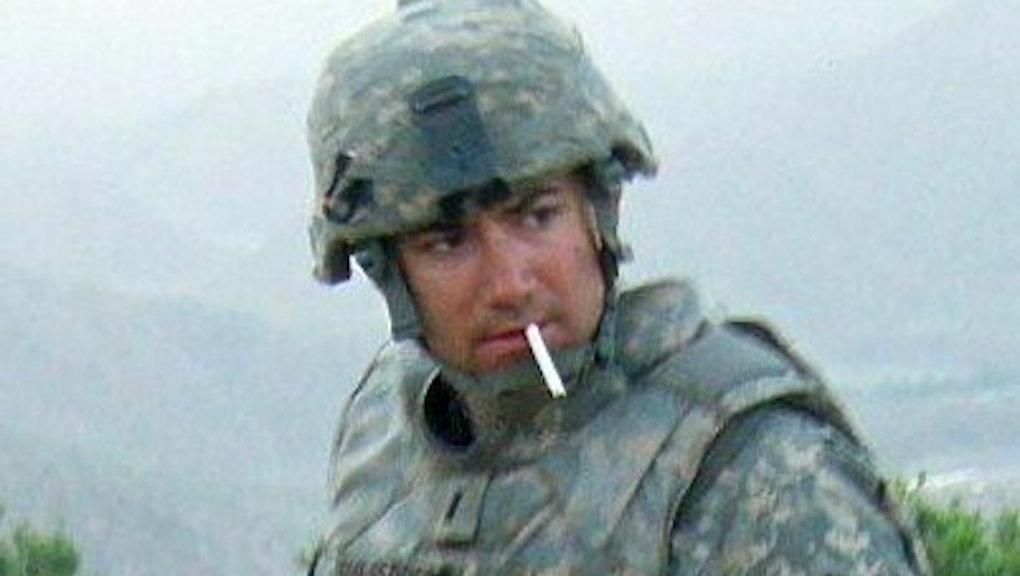 Most infantrymen I know grow beards when they leave the Army.

They take a couple weeks off, tear through some booze and cash, get a little wild, play that video game they’ve been waiting to dive into for a while (mine was Skyrim), exhale, and then get back to work or school.

This seems to be necessary in part because the military still doesn’t have a very good approach to the almost inevitable psychiatric and social disorders that come about as a natural outgrowth of going to war — a group of neuroses and behaviors collectively known as PTSD, or Post Traumatic Stress Disorder.

I had a fairly intense case of PTSD when I was in the Army, did a bad job of taking it seriously, and was not encouraged to take it seriously. I wanted to take advantage of this platform to say some words about the process.

Enough has been said about PTSD at this point so it doesn’t seem critical to go into a detailed background of the issue. For those unfamiliar with the term, PTSD describes a condition wherein a person who has lived through a traumatic event finds themselves unable to move forward because that event exists in their present rather than their past. For people with PTSD, their brains are hung up on some memory, which they re-live as though it is happening again and again — through dreams, nightmares, or waking anxiety. Any traumatic incident can trigger PTSD.

War, obviously, is a trauma factory. But PTSD doesn’t have some special quality that comes about from war or combat (save that it naturally and not surprisingly occurs there with similar frequency to rape, or violent assault, or torture, or any of the places one would expect to discover PTSD).

My own experience with PTSD has been fairly benign, as these things go, though I suppose my girlfriend would disagree. Nightmares, heavy drinking, a sort of truculent unwillingness to subject myself to therapy or psychiatry, paranoia, intense social anxiety, and a near-psychotic resistance to the idea that I could ever be fallible in any way. Writing (or reading) the symptoms down like that, it probably sounds like I’m either exaggerating (I’m not) or that I’m mischaracterizing a serious situation.

I call my PTSD mild or commonplace because I was able to function in society without causing real disruptions. Some people came back from war and have incredible difficulty coping; those would be the more severe cases of PTSD, where alcoholism or anxiety land the sufferers in prison, or worse.

(Photo: SPC Jeremiah Pulaski, one of my former soldiers with the 10th Mountain Division and a valorously decorated combat veteran, took his own life March 26, 2011. I'm not sure PTSD therapy would've helped him — but it might have.)

I owe the relatively good place I’ve discovered — able to go to parties without drinking heavily, fairly comfortable around strangers, vastly reduced reliance on substances, and few nightmares — to the PTSD therapy I did, called "Cognitive Processing Therapy" or "CPT." This model of PTSD therapy posits that someone suffering from symptoms like the ones I described earlier (mild symptoms, in order for the therapy to stand a good chance of working) can, by visualizing and attacking fallacious assumptions about an event, and reliving the event through writing, eventually reprogram or rewire the brain to see the event as benign or at least not so threatening as to totally dominate the sufferer’s life. The assumptions are called "stuck points," and are the underlying foundations upon which the PTSD rests, and without which the version of events that result in nightmares and worse cannot exist.

I didn’t want to take medication except as a last resort, and it never became necessary. The mistrust of medication was another legacy of my military training. People who are reliant on anything stronger than over-the-counter pain meds are generally thought of as somehow addictive or dependent — weak.

I’m slowly confronting that as well, but it was symptomatic of my broader reluctance to do anything that didn’t square with the vision of myself I was trying to cultivate in the infantry. CPT was the perfect therapy for me, because it allowed me to interact with my healing process in a way that gave me enough independence and buy-in to feels as though I was healing my condition, as though it was something I could beat through discipline and effort.

PTSD covers a wide range of extremely unpleasant experiences, and, left untreated, can lead to a lifetime of difficult relationships, missed opportunities, and in some cases, suicide.

At the end of my military career, I was lucky to have a direct supervisor, Major Matt Hardman, who encouraged me to seek treatment, although not everyone in the chain of command was as understanding. The overall culture of the military, and especially combat arms and the infantry, is one that is diametrically opposed to people seeking help for psychological and sometimes even physical injuries. I hope that my fellow vets (and especially combat vets) all make good use of the free therapy available to them at the VA, and take the problem seriously.

There are effective treatments out there, and if everyone works hard to tackle the legacy and trauma of war, we can reduce or even defeat the old stereotype of the haunted war vet.