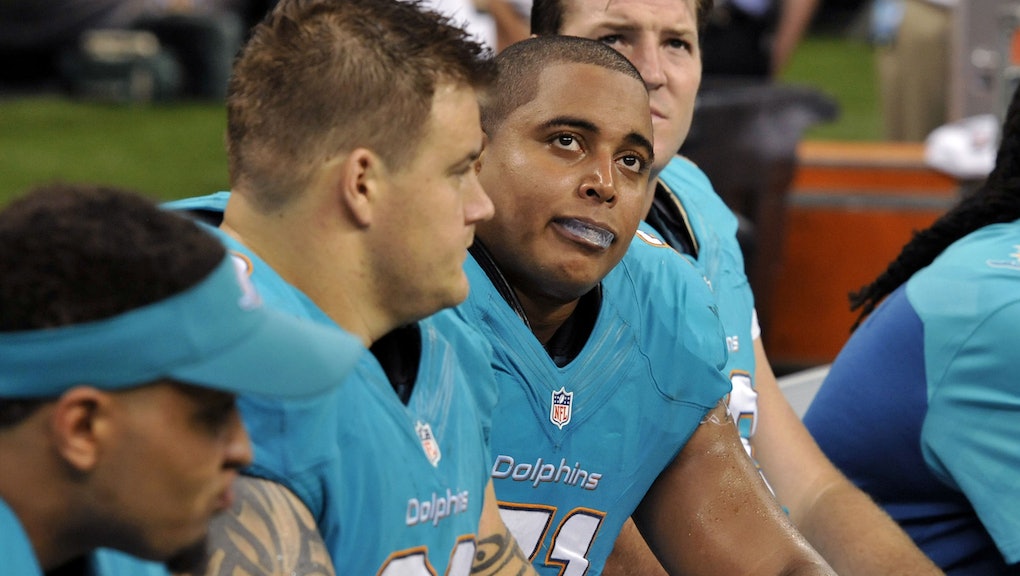 Strong Men Don't Hide Their Emotions, They Show Them

Jonathan Martin of the Miami Dolphins checked himself into a hospital recently to deal with emotional distress. Some former players and sports pundits have been clear about expressing just how much of a wuss he is for doing that: Suck it up. Man up. Stop crying about it.

Please: men have emotions too and we don’t only deal with them by punching people.

For those who don’t watch Sports Center through bleary eyes over a bowl of cereal every morning, one football player, Richie Incognito, has allegedly been harassing and bullying his teammate, Jonathan Martin. We don’t yet know the extent of the harassment, but what evidence we have seen makes it clear that Incognito’s actions towards Martin are abusive, racist, and downright disturbing.

That this is happening in the NFL doesn’t surprise me, what makes me shake my head is the faux hyper-male reaction from some people to Martin’s decision to address his emotional anguish. A guy acknowledging his emotions? He must be a wuss.

Some years ago, in an argument with an ex-girlfriend, I felt tears coming, so I pinched the palm of my right hand to stop myself. Suddenly, I was more concerned with crying in front of her than I was about addressing the issue we were arguing about. Real men don’t cry, I kept thinking. Three days later, I still had marks on my right hand.

Despite recent articles and books forgiving men for having feelings, I feel that many people still pin our emotional reactions into one of two categories: stony, stoic Marlboro Man or oversharing, sensitive artist.

I refuse to accept that there are only two options, and that one is clearly considered more masculine than the other. There are various ways to respond to emotional stress and the most appropriate depends on the guy.

It is, however, too simple to say that men absolutely must share more. Scientists at UCLA found that men and women respond to stress by releasing oxytocin, a hormone that creates a calming effect that helps one bond with others. Women’s estrogen enhances its effects, while male hormones minimize them, meaning men literally get less utility out of sharing. Additionally, there is evidence that men’s more subtle reactions to emotional stress can be productively stabilizing and that women may sometimes overshare to the point of blowing things out of proportion, stressing themselves out more.

That said, there are biological advantages to sharing. A 2012 study from Stanford University found that verbalizing emotions helps us overcome them faster and "downregulates" their effects. Another recent study concluded that men who bottled up their emotions were more likely to report depressive symptoms than those who expressed them more often.

A 2012 Stony Brook University study also found vulnerability to be the root of many deep social connections. In an analysis of that study for Psychology Today, Dr. Seppala of Stanford points out that we fear vulnerability because we fear judgment and rejection. The easier course is to disguise our vulnerability, or cover it up, rather than expose ourselves.

Martin had the maturity and the courage to seek professional help and address the source of his emotional distress — Incognito — even though he certainly knew that it would expose him to public scrutiny, putting him in one of the most vulnerable positions imaginable. To me, that is more courageous and more masculine than punching Incognito in the face, or "sucking it up" and continuing to absorb the abuse.

I still almost never cry, not because I suppress it, but because that’s just how I am. I am, however, much better about vocalizing my issues, instead of swallowing them — a change that’s made me feel lighter and more comfortable with having emotions and understanding them (it’s also much easier on my right hand).

There isn’t a "best" way for a man to deal with his emotional issues and the evidence shows that sometimes it’s best to internalize and sometimes it’s best to share. “Manning up” should be about addressing the issue in the way that’s best for you, not simply conforming to a conventionally stoic, chiseled-jaw response.