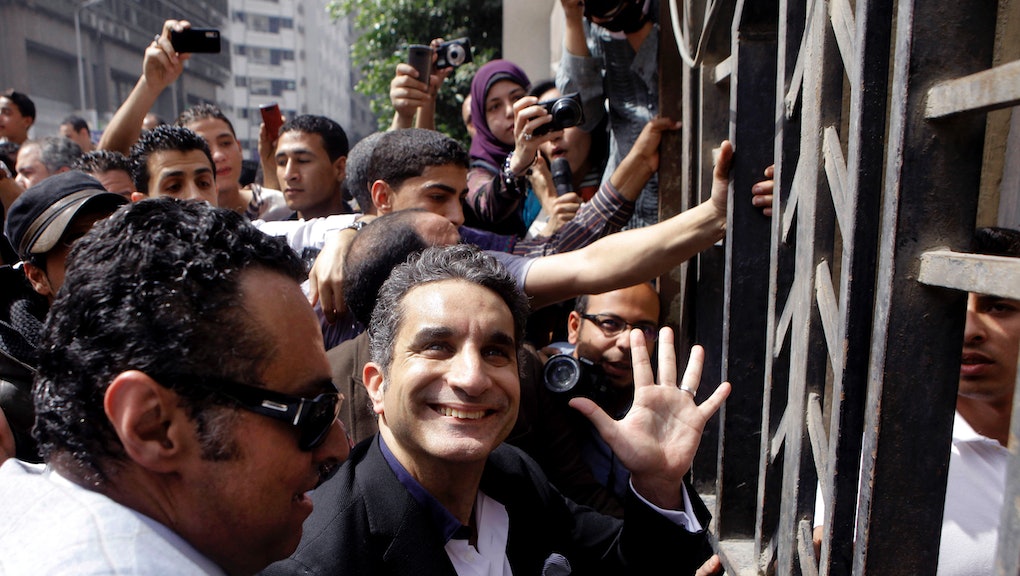 Can You Imagine Jon Stewart Getting Pulled Off the Air? It Just Happened in Egypt

Dr. Yousseff, host of the show Al-Bernameg ("The Program"), rose in popularity as the witty darling of the anti-government movement during the year-long tenure of Islamist President Mohamed Morsi. Youssef, a former cardiac surgeon, played a prominent role in Egypt’s revolution. Beginning as a YouTube channel similar to Jon Stewart’s popular Daily Show, The Program was picked up by the CBC network and is now watched by an estimated 30 million people.

In March 2013, the Morsi Administration responded to Youssef’s lampooning by launching an official state investigation into Youssef which resulted in charges of insulting the president and Islam. He was subsequently acquitted. In May 2013, with impressive foresight, Youssef told Human Rights First, “Things are better for the media than before but they should be much better. There are landmines affecting freedom of speech in the future and they are starting to show.”

After Morsi’s overthrow in July 2013 in a coup led by army chief General Abdel Fattah Al-Sisi, Youssef initially refrained from targeting the military-backed regime despite the violent political crackdown and declining human rights environment. Youssef’s relatively light criticism of the government garnered protests from anti-coup groups concerned with the aggressive tactics of the security forces and the systematic hounding of journalists.

However, with the long awaited return of The Program in late October 2013, which had been off the air since Morsi’s ousting, Youssef boldly changed his position, highlighting the hypocrisies of the ruling government, just as he had with the Morsi administration. He criticized the military-backed government and mocked public zeal for the army stating, "Fascism in the name of religion will be replaced by fascism in the name of patriotism and national security." Many of his jabs were aimed at Sisi, making fun of his admirers and joking that "Sisi has turned into chocolate,”"referring to the chocolate bars molded into Sisi’s likeness and sold at confection stores.

The CBC network which has close ties to the former Mubarak regime, suspended the second episode of Youssef’s The Program just moments prior to airing — a move indicative of the growing self-censorship in Egyptian Media. CBC pointed to Youssef’s “failure to follow editorial policies” as the reason for pulling the show. Youssef, who is usually outspoken, has remained quiet since The Program’s suspension and has left his fans waiting and hoping for the unaired episode to be uploaded to YouTube.

Not only has The Program been pulled from the air, but as was the case under Morsi, Youssef is again finding himself the subject of a state-backed investigation. Unfortunately, he is not alone. Like the Morsi reigme, the military-backed government is cracking down on free expression by targeting journalists and subjecting them to arbitrary arrests, military trials, and abusive treatment in detention. Cases include Hatem Abul Nour (sentenced for impersonating an army officer over the phone), Ahmed Abu Deraa (arrested for charges of spreading false news about the army), and Emad Sayed Abu Zeid (detained on accusations that his online publication harmed public opinion by spreading false news).

Youssef warned Human Rights First in May 2013, "You’ll find more and more activists being taken to interrogation and harassed — they’re draining people, it’s an endurance event to keep going under all the pressure."

In targeting Youssef, the new government seems to be copying the old.