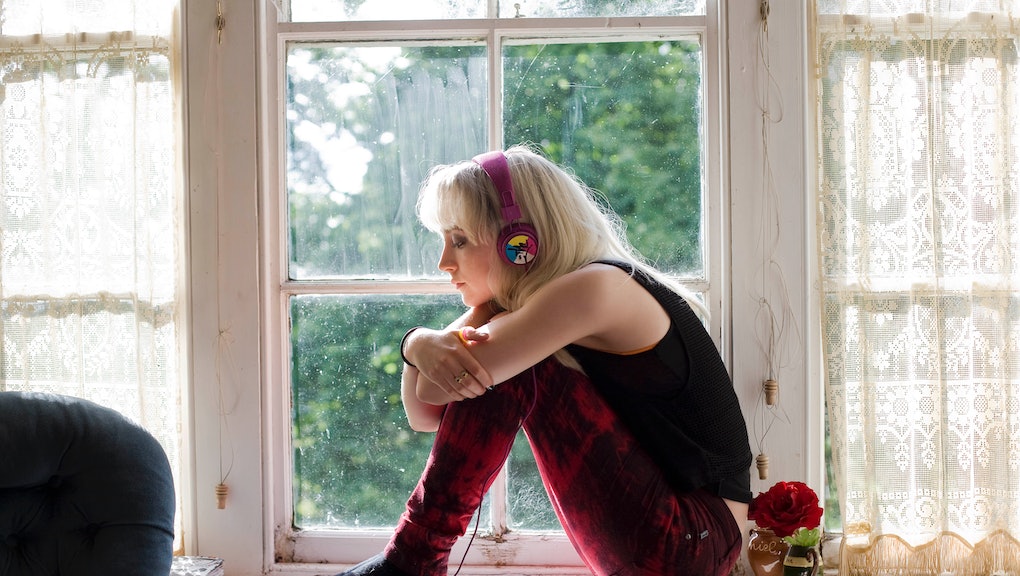 Meg Rosoff's How I Live Now is a particularly daring young adult novel that tackles the topics of war, young love, anorexia, and even incest. Published in 2004, it was a "word-of-mouth" best-seller that went on to win the prestigious Guardian Children's Fiction Prize. Friday, the film version opened in the U.S. starring Saoirse Ronan and directed by The Last King of Scotland's Kevin MacDonald.

The story follows a troubled 15-year-old New Yorker named Daisy (Ronan), who is sent away on the brink of war to live with distant cousins in the English countryside. Once there, Daisy's life entirely changes from that of a surly Manhattan teen, to one of a young woman in love and fighting for survival in what is now a U.K. military state. I spoke to the novel's author Meg Rosoff about the film, her book, and what it's really like to see the characters she imagined brought to life.

Elena Sheppard (ES): Congratulations on both the book and the film. I imagine it's a strange feeling when your book becomes a movie. What is it like to see characters you invented brought to life that way?

Meg Rosoff (MR): It's a really bizarre feeling. The thing is, it's been in development for 10 years, so in a funny way you kind of get used to it by increments. Over 10 years you sort of learn to give it away to the director and the producers. When I walk around London, every single bus in London and every underground station has a huge poster for How I Live Now and I never think, "Oh look, there's my book," I think "Oh look, there's Kevin [MacDonald's] movie." It's sort of a one-step-removed feeling.

ES: How involved were you in the making of the movie?

MR: I wasn't desperately involved, I wrote the very first screenplay 10 years ago and then kind of gave it over to professionals for a variety of reasons … I didn't have very much to do with it at all, but I was very, very lucky because I really trusted the producers and I obviously loved the director.

I mean, you have to hold your nerve a little bit because you don't really know what they're going to do — I didn't see the film until it was finished, although I did visit the set. But once I saw the cast — Saoirse Ronan is just absolutely amazing, she's an amazing person, she's an amazing actress; and the rest of them too, George MacKay I love, and Tom Holland I think is a future huge star, and Harley Bird — it was pretty thrilling. Then you start thinking of it as having it's own life.

ES: So it sounds like you're happy with the final product?

MR: Yes, I'm really happy with the final product. I didn't expect a carbon copy of my book, and I didn't want that. The book is very cerebral, like an internal dialogue — or monologue, really — and when Kevin MacDonald took it over he had to figure out a way to make the story much more external. I think he did a pretty amazing job with that.

ES: I'd love to ask you a little about Edmond: 14-years old, a smoker, and with a haircut "that looked like he cut it himself with a hatchet in the dead of night." Physically, what you describe is not your typical romantic lead. Was that something you were conscious of when you wrote the character?

MR: Oh, yes definitely. Actually, in an early draft of the book, I had him to be 12, but once he started up the affair with Daisy I thought 12 was a little bit young. In a way, what I wanted from him — and it's quite different from how he appeared in the film — was not pre-sexual exactly, but innocent, like a faun almost. I didn't want to write about a big, grubby, sexual story I wanted to write about what it was like to fall in love. I wanted to retain some kind of innocence between the two characters, even though of course the sexual relationship means it's not entirely innocent.

But then in the film it got complicated because Saiorse Ronan was 18, and from what I understood Kevin was a little bit reluctant to hire her because she was a bit older than he was looking for. But she was so amazing that she was obvious for the role, and once you have an 18-year-old, you can't then hire a 14-year-old or 15-year-old. But I think it worked really well, they worked really well as a couple and I didn't particularly miss the fact that the ages changed a bit.

ES: As a reader, one of the biggest things I had to get over was the fact that Daisy and Edmond are both love interests and cousins. Why did you make that decision and was it scary to take socially taboo risks in your writing?

MR: Totally not. The hilarious thing about this is that no one, really no one — I mean you just asked about it slightly — but no one says, "oh my god is it weird having a 14-year-old boy and a 15-year-old girl in this big, heavy sexual relationship?" Everyone says, "ooooh they're cousins." It's not illegal in most places of the world to marry your cousin and, to be honest, I never gave it a second thought. It didn't occur to me that I was writing about incest until people started complaining about it ...

Part of me is very interested in the edges of what's acceptable. What's acceptable is terribly limiting in the world, and things happen all the time that aren't necessarily socially acceptable and I don't have any kind of instinctual reaction against those things ... Honestly, I've always said that if people had said, "people are going to be really freaked out by this," I would have changed it. It wasn't an integral part of the book. I thought what would bother people would be the age of the protagonist, but that hasn't seemed to be a problem.

ES: Another detail that was changed for the movie was that Daisy has an eating disorder in the book and not in the film. Why was that an important part of the character for you when writing?

MR: I was looking at a character who had a lot of what you might call "first world problems." So many girls now have eating disorders and body image problems, and they're cutting themselves — all these kind of issues of inward-looking disturbances. I was thinking, as I wrote it, that part of the problem is we've got too much money, we've got too much spare time, kids don't play outside anymore, so what do they do? They sit inside on the computer and they think about themselves. And what happens when you are taken outside of yourself? You don't have time to think about all that ...

I always say that, for me, my adolescence started at about 15 and went on 'til my 40s. I see adolescence as a triple trajectory; it's the period during which you're finding out who you are, and what you're going to do with your life, and you're wondering who is going to love you.

ES: How did you get yourself into the mindset of a teenage girl when you were writing this? Were there movies that you watched, or girls that you talked too —

MR: No, no, absolutely nothing like that, and I hadn't read a book written for teenagers since I was 15. That voice, and the people who are attracted to writing about adolescence — which is how I see myself, I don't see myself as a writer for teenagers; I see myself as a writer about adolescence — writers are usually attracted to subjects they've had to struggle with quite a lot or that they've been really interested in.

I always say that, for me, my adolescence started at about 15 and went on 'til my 40s. I see adolescence as a triple trajectory; it's the period during which you're finding out who you are, and what you're going to do with your life, and you're wondering who is going to love you. Those are the three things — identity, love, and work — and for a lot of people, in fact for most people, that doesn't end when you're 19.

I struggled. I didn't write my first novel until I was 46, so you could say I really struggled with those issues for years and years and years. Now that I'm in my 50s, I notice a lot of my friends who are getting divorced or changing careers, and they're back to struggling with those issues again. So I guess you could say it's the subject of adolescence that really interests me. And that's my voice, I don't have to go outside of my head to find that.

ES: Do you think that's why these books about young adults appeal to grown-up adults as well? Because they're still dealing with these same issues?

MR: I think that's one of the reasons. It depends on the book. I always find it interesting that people group young adult novels together, though you would never consider grouping 50 Shades of Grey and The Corrections together. There are teenage books, and then there are teenage books. I think a lot of people are reading fantasy and vampire books because they've never really grown up and they like that kind of stuff. And some of it's much simpler — the moral world is much simpler. But a lot of the books for teenagers that are being written now are very morally complex and bring people back to a time that they are still struggling with. My whole generation — when I look at my parents, my father put on a suit and tie everyday and went to work, and my mother was a lady. My husband doesn't own a suit, and I go around in jeans all the time, and we never really grew up. It's almost like my whole generation remained adolescent. That gap between being a teenager and being an adult is much stranger now than it used to be.

ES: Final question, a lot of our readers are young writers themselves. What advice do you have, particularly for someone interested in switching careers, which I know is something you did?

MR: I always say to my writing students: it's not like being a ballerina. You don't have to get your career underway by the time you're 12. I think the more you do with your life, the more mistakes you make, the more careers you have, the more relationships you have, the more things you experience, the better the writer you are. And a lot of people who start writing very early can't really write about anything except being a writer, and that can be really boring. So my best advice, in a way, is don't be in a hurry.

MR: You know, as Shakespeare said, "The readiness is all."