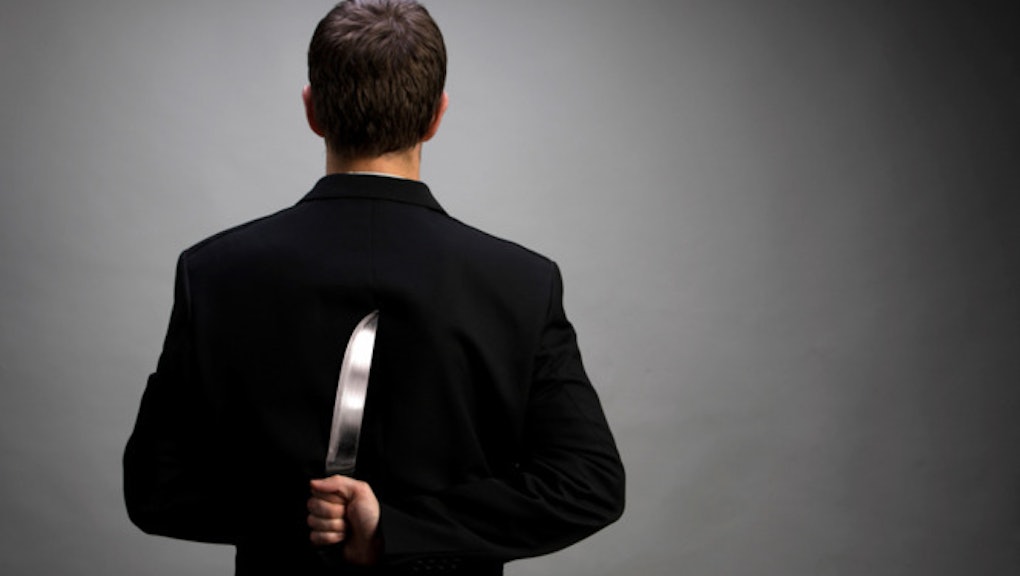 These Are the 10 Most Psychopathic Jobs in America

As an aspiring lawyer, I suspected it all along, but now my suspicions have been (unfortunately) confirmed: We're all crazy.

A ranking compiled by Oxford psychologist Kevin Dutton, author of The Wisdom of Psychopaths: What Saints, Spies, and Serial Killers Can Teach Us About Success, suggests that lawyers, CEOs, and TV/Media top the list for professions chosen by psychopaths. Conversely, care aids, nurses, and therapists are the least psychopathic professions.

Some aspects of the list seem a bit counterintuitive. For example, doctors are listed as "-Psychopathy" while surgeons are listed as "+Psychopathy." I was also intrigued that chefs are a psychopathic bunch. Who knew?

Note that, while the word "psychopath" generally conjures up images of crazed men with chainsaws, the actual dictionary definition is less scary. According to The Week, a psychopath is a person who has a "personality disorder that has been variously described as characterized by shallow emotions (in particular reduced fear), stress tolerance, lacking empathy, coldheartedness, lacking guilt, egocentricity, superficial character, manipulativeness, irresponsibility, impulsivity, and antisocial behaviors such as parasitic lifestyle and criminality."

The natural question that comes up when viewing this list is: Why? The obvious answer is that for the most part the jobs on the left offer up much more of a feeling of power than the jobs on the right do. In addition, while some of the jobs on the left certainly provide the potential for human connections (I certainly think "lawyer," "clergyperson," "civil servant," and "surgeon" do), more of the jobs in the right-hand column stress empathy on a day-to-day basis. Indeed, a prerequisite for being a good nurse or therapist is the capacity to empathize with one's fellow human beings.

That said, it seems to me that empathy is direly needed by many of the professions in the left-hand column too. A good defense attorney, for example, should surely be able to empathize with her client. A priest should (one would hope) empathize with his congregation. Assuming the list is accurate, then, the professions on the left could probably learn a heck of a lot from the ones on the right.

However, next time I see a chef clutching a knife, I'll be sure to run in the opposite direction.