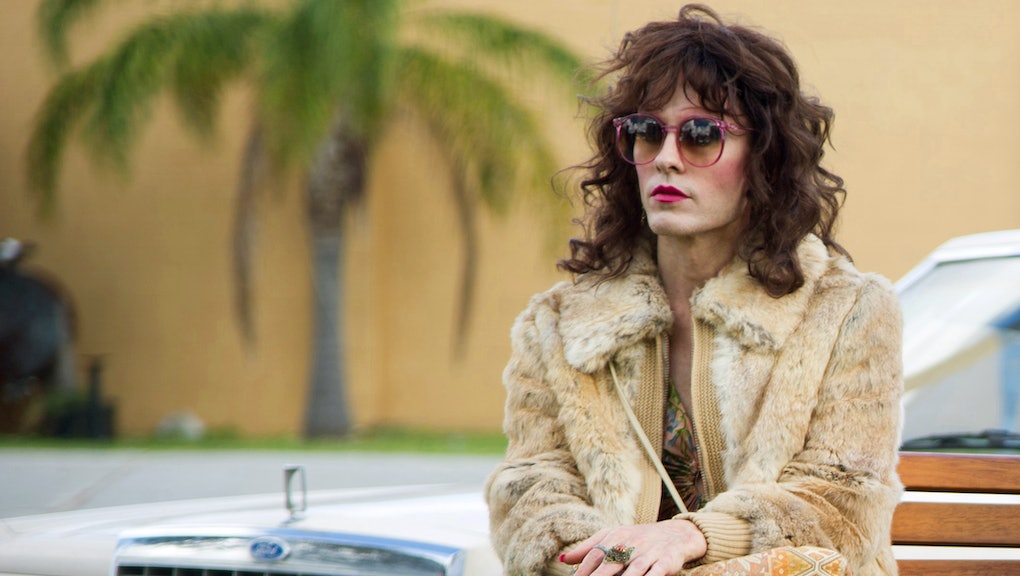 Jared Leto's performance in Dallas Buyers Club is being labeled as Oscar-worthy — a performance that showcases his extensive range as an actor. But his turn as a transgender woman also leaves you wondering if he was the best fit for the role.

Leto plays a transgender woman, Rayon, opposite Matthew McConaughey, both of whom are dying from AIDs and working together to smuggle in AZT drugs from abroad to fight the auto-immune disorder. It's no easy feat for a cisgender actor to take on the role of a transgendered person, and Leto immersed himself in the character of Rayon to such an extent that the film's director, Jean-Marc Vallee, has said he "never met Jared Leto," but he did meet Rayon.

For all that Leto brings to the screen, however, some are asking why did the role of a trans woman not go to a trans actor?

Most people would be hard-pressed to name a transgender actor. If they could, they'd find it even more difficult to name a point at which they saw a transgender actor play more than a stereotypical, static-character. Billing for trans actors tends to be scattered with credits like "tranny," or "attractive but strange woman," and few serious roles recognizable in the mainstream media.

As LGBT activist and journalist Juliet Jacques wrote in 2012, "Where are the professional trans actors? [This] is where cisgender actors playing trans people becomes more problematic: I cannot recall one out trans person playing a mainstream cisgender role, so their only entry may be in playing trans roles." Given that transgender people are invisible in contemporary media, it becomes problematic that Leto is taking the role of a trans person when there are trans actors out there trying to find roles and work.

While it's important to acknowledge that Leto, by taking on the role of Rayon, is drawing attention to the experience of transgender people, it's also important to recognize that the stories of underrepresented, oft-ignored and -misunderstood communities may be best told by the people who live those lives. Susan Rohwer of the LA Times rightfully points out that "it is no longer acceptable to cast cross-racially, so why is it acceptable to cast someone who is not transgender in a transgender role?"

Casting trans actors in trans roles would have powerful social effects as well. As playwright MJ Kaufman wrote about the representation of trans-identified people in theater:

"Casting trans actors in trans roles is important not only because we need to make our bodies visible, but because many transpeople's lives are materially impacted by transphobia.

Not only are we underrepresented in art and media, many transpeople face long periods of unemployment, trans youth are disproportionately homeless, and transwomen are disproportionately incarcerated … Given that this is the current landscape for trans artists, it is politically unconscionable to give a job created for a transperson to a cis person."

For someone like me — someone who is cisgender — the experience of people within the trans community is one I, and most people in my life, would never know or understand if it was not for portrayals in media. The role that media can play in helping people understand what lies outside their immediate purview is vital. Laverne Cox, the trans actress who plays Sophia on Orange is the New Black, says the visibility of LGBT people was changed with television, so the way film and television address the trans community and their stories could begin conversations regarding transphobia.

Yet visibility of such actors is increasing. Laverne Cox is an interesting example. Through blogging and advocating for the LGBT community and taking on roles in independent films like Musical Chairs, she has, in many ways, become a face for trans actors in the U.S.

Cox is not the only one pushing for further inclusion of transgender people in mainstream media. Trans actress Harmony Santana was nominated for an Independent Spirit Award for her role in 2011's Gun Hill Road about a teenage boy transitioning and the repercussions and difficulties that arise from that transition. Her nomination made her the first transgender person to be nominated for a major American acting award.

What actresses like Cox and Santana are doing was only possible following the work of someone like Candis Cayne who made history as the first transgendered person to have a recurring role on a television show when she played Carmelita on Dirty Sexy Money. It is no stretch to say, then, that what Cox and Santana are doing now is laying the foundation for future out-transgender men and women to receive notable work. When someone like Jared Leto is able to take a high-profile role of a trans-woman, when he is himself cisgender, it's problematic because it means someone who identifies as trans was passed up for the role. Imagine if not Cox, but a cisgender actor took on the role of Sophia in Orange is the New Black — the role would have far less depth and would likely border on caricature rather than sincerity.

This isn't about Leto's skill or talent as an actor, but this is about the fact that trans-identified people are missing out on substantial acting work when someone like Leto takes on the role of Rayon — and roles like Rayon in Dallas Buyers Club, which are already few and far between, are often the only opportunity someone like Cox or Santana or Cayne may have to break onto the big screen.

Cox and Santana only represent two people within the creative, artistic trans community. As trans visibility increases, the spaces and opportunities for trans-identified people too will hopefully grow. This weekend marks the 11th San Francisco Transgender Film Festival, the largest to date where people will have the opportunity to watch short films focused on the work of trans identified people. And earlier this year, the American network, CW, announced it was working on a new project, ZE, focusing on a female-to-male transgender teenager in Texas — hopefully ZE will become a space for transgender actors to find work, and not merely watch cisgender actors play out their stories.