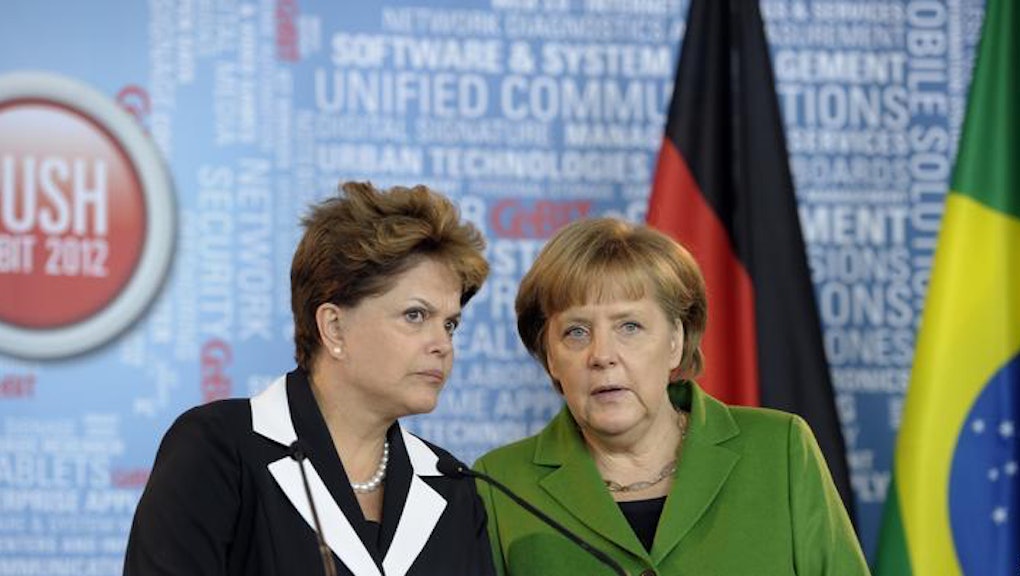 Two of the world’s most powerful women have joined forces to rein in U.S. spying. Just last week, Dilma Rousseff and Angela Merkel introduced a draft resolution at the United Nations condemning the "excessive" use of surveillance abroad. Though it does not indict the United States specifically, it is a clear response to the National Security Agency’s (NSA) activities in Brazil and Germany — most notably, the U.S.' decision to listen in on the two presidents’ private communications.

Brazil and Germany have been at the forefront of the Edward Snowden controversy since it began. The two U.S. journalists who broke the story reside in Rio de Janeiro and Berlin, and have dedicated considerable time to disclosing the extent of American spying in their surrogate homes. Rousseff and Merkel's strong pushback has also helped keep the issue in the headlines. Both leaders came of age under governments that used spying to stifle dissent, and reports suggest that they were personally affronted by the United States’ overreach. Yet there has been a glaring double standard in the U.S. response to Rousseff and Merkel’s complaints — an indicator of Washington’s hesitation to forge a closer partnership with Latin America’s largest nation.

Relations with Brazil deteriorated in early July when it was revealed that the United States was monitoring the communications of Brazilian citizens. The story generated a great deal of controversy in Brazil, as Rousseff was slated to visit Washington in October. Yet while the Obama administration recognized Brazil’s concerns, it denied any wrongdoing. Behind closed doors, U.S. officials assured their Brazilian counterparts that intelligence gathering was strictly limited to counterterrorism, a close source confirms.

Shortly afterwards, however, these assurances proved false. In September, leaked classified information showed that both Rousseff and Brazilian oil company Petrobras were under surveillance, indicating the NSA had much broader interests than terrorism. Rather than concede that it had overstepped, the Obama administration simply acknowledged that the Brazilians had "legitimate questions" and noted that it was reviewing its surveillance procedures. The episode led to a "breakdown in trust," according to one Brazilian official, leading Rousseff to postpone her state visit. She found little sympathy in Washington’s foreign policy circles. Even U.S. experts in Latin America criticized the snub as diplomatically immature, exaggerated, visceral, divisive, and demonstrative of a "circa 1970s Third World 'us-versus-them' mindset."

A little over a month later, reports surfaced that the NSA — much as it had done with Rousseff — was monitoring Merkel herself, provoking a wave of outrage in the Eurozone. Although Rousseff and Merkel’s cases are quite similar, Washington has been far more receptive to Germany's requests.

Obama has said that the NSA will no longer monitor allied presidents, and reportedly apologized to Merkel for the transgression. John Kerry has publicly admitted that surveillance has gone "too far." Congress has convened hearings on the topic and is sending a congressional delegation to Europe to assuage concerns. Even Senate Intelligence Committee Chair Dianne Feinstein, an avid defender of the NSA, articulated her "total" opposition to the "collection of intelligence on leaders of U.S. allies — including France, Spain, Mexico and Germany." As many in the foreign policy establishment have come to Germany’s defense, they have failed to mention that Rousseff suffered virtually the same affront.

It is no secret that friendly nations spy on one another. Our allies doubtlessly take some level of U.S. espionage as given, in addition to collecting information themselves. But targeting friendly heads of state — and, importantly, failing to keep it secret — makes it harder for foreign leaders to cooperate with the United States without facing domestic opposition. Recognizing that it is incumbent upon us to regain their trust, the United States has already taken tangible steps to make amends in Europe.

It would be disingenuous to claim that our relationship with Brazil is as developed as our relationship with Germany. But the whole point of Rousseff’s state visit was to deepen bilateral ties between the largest democracies in the Western Hemisphere. As the United States reevaluates its foreign policy in the wake of the Snowden affair, it would be a grave mistake to ignore the recent damage to our relations with an important emerging power.