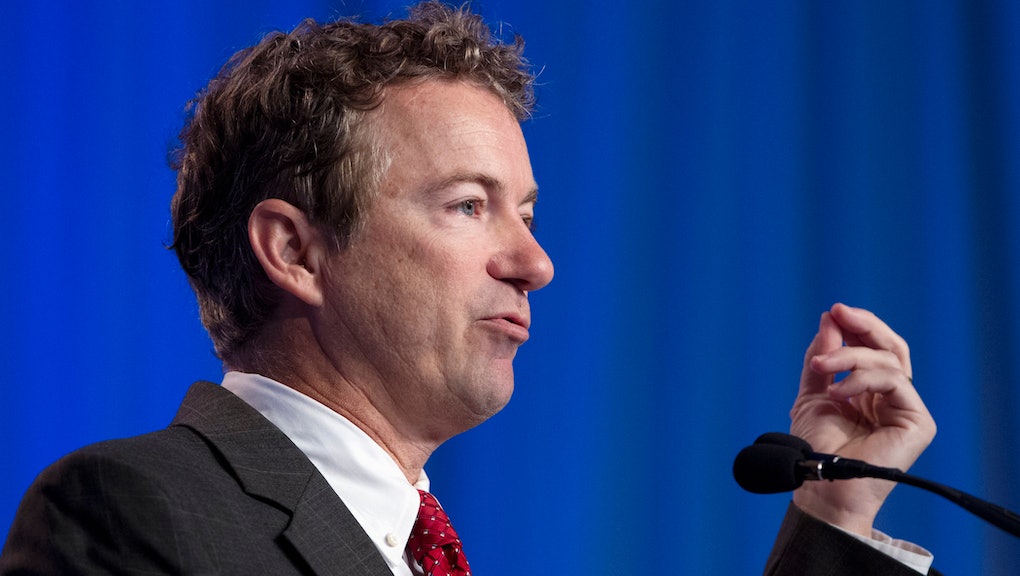 Senator Rand Paul (R-Ky.) has been under fire across the nation this past week for allegedly plagiarizing parts of his speeches from Wikipedia, with some saying he’s sinking fast and “melting.” Paul's handling of the matter seems to be casting doubt on his readiness and potential to run for president in 2016. However, let’s not be so quick to assume that these charges will have a large impact three years from now.

Both Joe Biden and Barack Obama have had plagiarism “scandals.” Biden seems to have recovered just fine in his political career after his Middle East policy scandal. President Obama was also accused of plagiarizing a speech he gave in 2009, when it was found remarkably similar to a speech by Massachusetts governor Deval Patrick from 2006. These accused plagiarizers now hold two of the top leadership positions in the world, and their plagiarism allegations seem to be forgotten.

Rand Paul’s Washington Times column was cancelled after the allegations, but it has subsequently been picked up by Breitbart News. Political scandals are increasingly becoming the norm for presidential candidates.

Kentucky Republicans are already shrugging off the allegations and stating that they most likely won’t affect Paul's 2016 chances. “It is more of an issue of a speech writer not giving him the right information,” said Troy Sheldon, chairman of the GOP in Kentucky's 4th Congressional District, “It doesn’t impact my opinion of him.” Tea Party leaders are still standing behind him: “I think everybody does it, whether it’s in a speech or answering the questions of a reporter,” said Larry Robinson, Northern Kentucky Tea Party president, adding, “Everybody is making big deals out of little deals.” If it’s not impacting opinions now, a couple of years in the future it most likely won’t be impacting voters then either.

Stuart Rothenberg, editor and publisher of the nonpartisan Rothenberg Political Report, makes a good point when he says, "The people who love him won't believe anything critical about him, and the people who don't like him don't need any additional evidence," adding that the overall damage is not serious. Michael Baranowski, a political scientist at Northern Kentucky University, says the plagiarism charges are only a temporary setback: "Potential opponents may try to bring this up, but outside of political junkies, very few people will remember any of this" in 2016.

It’s also important to recognize that liberal members of the media have a habit of blowing issues out of proportion. While Rachel Maddow read the “terrible hometown press” reactions on her show last Thursday night, she neglected to mention the people who aren’t as bothered, such as those mentioned above. While Paul’s plagiarism seems to indeed be real, liberal media outlets have an agenda to undermine potential Republican candidates, as they are already starting to do with newly reelected New Jersey Governor Chris Christie. Democrats are openly saying they’re going to start spending money “chipping away at Christie’s moderate image” to present him as a hard-line conservative in time for the 2016 election.

If Paul does want to run for President, he will need to prepare for this kind of scrutiny. Candidates are put under a microscope, with every aspect of their lives analyzed for the country to see. However, the American people are fickle and forgetful voters. When it comes to Paul’s (possible) run in three years, memories of this plagiarism scandal will probably be few. I’m not defending Paul, and what he did was wrong, but it’s a small offense compared to past political scandals. Without a doubt it will be dredged up by opponents, but as far as making a significant difference in whether or not he is elected, I personally doubt it.

As Buzzfeed’s Andrew Kaczynski states, “Sen. Paul is hardly the first politician to appropriate the words of others without following proper citation conventions, and he will not be the last."