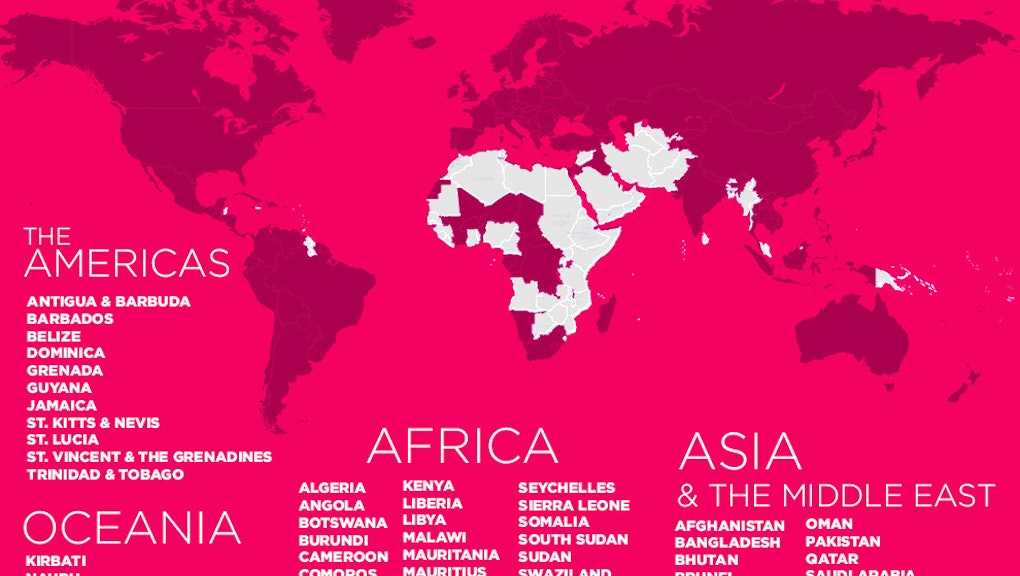 Immigration Reform 2013 is Critical For LGBT Immigrants, Just Take a Look At This Map

On Tuesday, President Barack Obama will once again speak about the dire need for immigration reform. Of the estimated 10.1 million adult undocumented immigrants living in the U.S., about 267,000 identify as lesbian, gay, bisexual, or transgender (LGBT). This subgroup is desperate for immigration overhaul — not just for family stability, job security, and access to social services, but out of fear of being deported to countries where they will likely face violence and persecution.

The U.S. should play a greater role in offering protection and granting asylum to individuals who face persecution based on their sexual orientation. Not doing so sends the message that we support discrimination and torture. Our country takes pride in being a melting pot of cultures and the land of freedom and opportunity, but as we remain stalled on immigration reform, LGBT individuals around the world are suffering with no place to go.

According to a report published by the Williams Institute, approximately 71% of the undocumented LGBT community identify as Hispanic, 15% as Asian or Pacific Islander, 8% as white, and 6% as black. An estimated 49% of LGBT undocumented immigrants in the U.S. are believed to be under the age of 30. The immigrants in this age group could greatly contribute to the U.S. economy if they were legally accepted.

A recent study by the International Lesbian, Gay, Bisexual, Trans, and Intersex Association (ILGA) found that 76 countries around the world “criminalize same-sex sexual acts between consenting adults.” LGBT individuals face unreasonable fines, imprisonment, forced labor, torture, and the death penalty in some of these countries.

Currently, LGBT immigrants from these countries can request asylum in the U.S. or “withholding of removal” if faced with deportation. In both cases, applicants must have suffered persecution in the past or fear future persecution due to race, religion, nationality, membership in a particular social group, or political opinion. In 1990, U.S. immigration law recognized those persecuted for their sexual orientation as eligible for withholding of removal.  Withholding grants immigrants the right to remain in the U.S. and work legally, but unlike asylees, these individuals cannot apply for legal permanent residence.

If foreign nationals fear they will be persecuted in their country of origin, they can seek protection under the United Nations Convention against Torture (CAT). In these cases, individuals do not need to fall under any of the five protected characteristics, but must still prove they are “more likely than not” to face torture.

One recent case is that of Jamaican immigrant Anthony who immigrated to the U.S. as a teenager. “Anthony” was used as a pseudonym because the individual requested anonymity due to fear of being identified as gay and tortured or killed if removed to Jamaica, a country beset by intense homophobia. Anthony applied for protection under the CAT, but his application was denied on the basis that he had not proved he was gay. Citing a friend-of-the-court brief authored by Lambda Legal, the Center for HIV Law & Policy, and Cleary Gottlieb Steen & Hamilton LLP, the Board of Immigration Appeals reversed the lower immigration court ruling and remanded the case back to the immigration court to address whether Anthony would likely face torture in Jamaica because of his sexual orientation.

The U.S. needs immigration reform now so that persecuted LGBT youth like Anthony can find refuge in our country. An immigration overhaul must also bring with it changes to the way our immigration court system decides on LGBT cases so that we may continue to realize the idea of justice and equality for all.