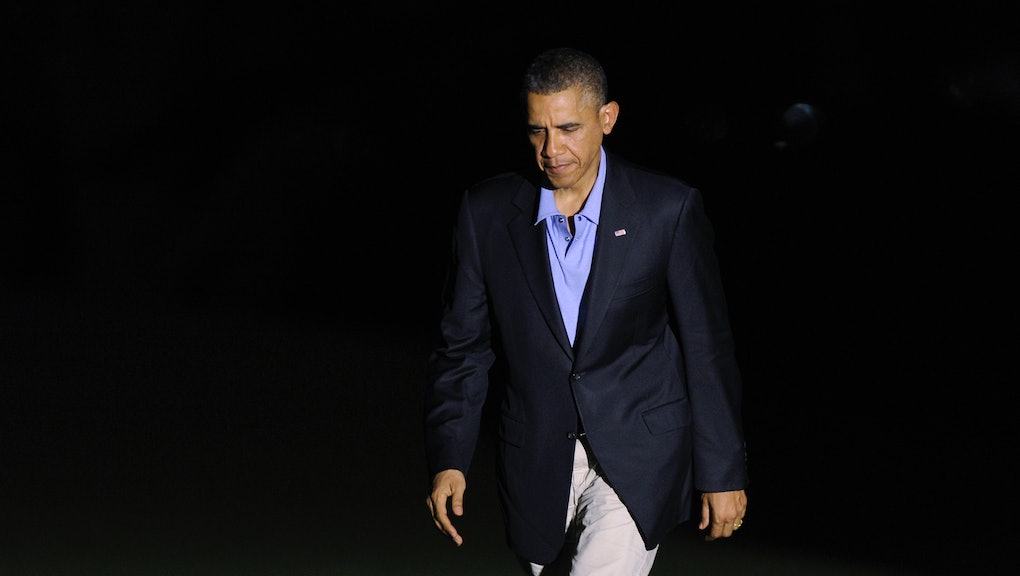 Is Obama Approval Rating Making Him As Politically Toxic As Bush?

President Obama stopped by Texas last Wednesday to smooth over the national disappointment with the glitches in the new HealthCare.gov website. As reported by the Wall Street Journal, he brought with him some volunteers to help consumers become more educated about their health care options and the ways they can enroll in programs. But during this visit, gubernatorial candidate and Texas state Sen. Wendy Davis — who just this summer received support from the President’s Twitter account during her attempt to filibuster a GOP-backed abortion bill in the state legislature — was conveniently hundreds of miles south in the Rio Grande Valley.

Coincidence? Well, considering the President’s approval rating has been steadily decreasing since August, it is no wonder why Davis would want to stay far away.

But this does seem to be a recurring pattern. Back in 2008, when Saturday Night Live was still funny and Tina Fey’s uncanny Sarah Palin performances were the talk of the town, the show did a skit about George W. Bush’s unwanted endorsement for Presidential Nominee John McCain. At the end of the skit, Will Ferrell, who played Bush said, “When you think of John McCain, think of me, George W. Bush. Think of this face. When you're in the voting booth, before you vote — picture this face right here. A vote for John McCain is a vote for George W. Bush.” What was so funny about this sketch was the honesty behind it. No Republican wanted to be associated with Bush while they were campaigning, and it appears history is repeating itself with Obama.

In fact, Obama’s approval numbers are on par with Bush’s at this point in his presidency, with both teetering around the 40% mark as of the first week in November 2013 and 2005, respectively.

The Washington Post's Sean Sullivan wrote that President Obama’s past support for Davis could be used against her by the Republican nominee, Attorney General Greg Abbott. And considering the state’s disapproval of Obama and the Affordable Care Act, it's not hard to see why.

It’s no surprise that politicians want to distance themselves from other politicians in their party who aren’t as popular as they once were, but shouldn’t we be judging our politicians based on their actions and not the actions of others?

It would be a shame for a candidate like Sen. Wendy Davis — who stood for 11 hours fighting for the rights of women — to be cast aside because of her fleeting association with Obama. We are told as children to not judge a group of people based on the actions of a few. Well, that’s what we need to start thinking about when we step in the voting booths, not who's backing whom.