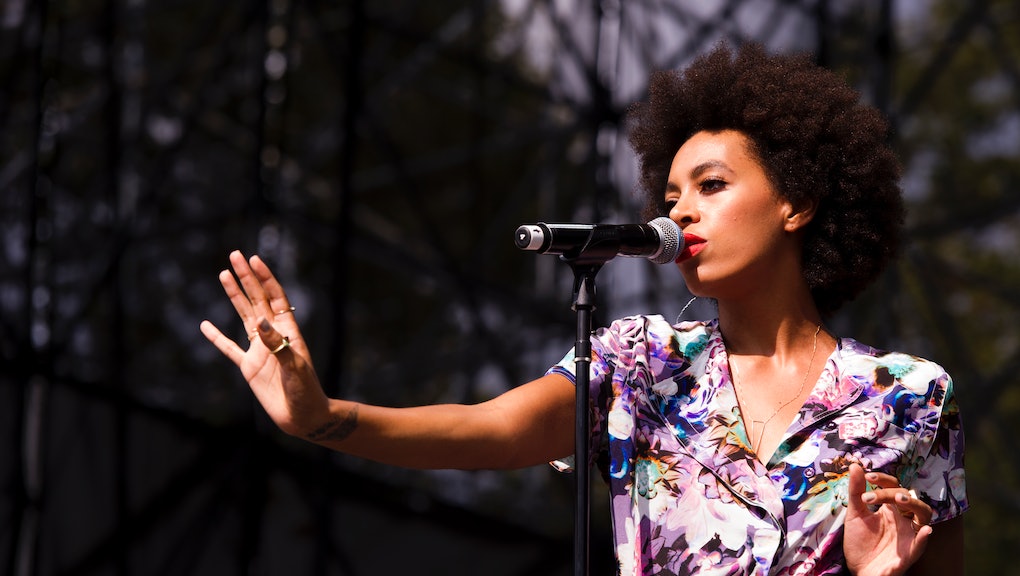 Solange Launches Indie Label for All of Us Black Weirdos

Like most young people, I love Solange Knowles for her eclectic music and the almost palpable aura of unaffected cool she exudes through the screens of our laptops and smartphones.

She’s called Saint Records as "a haven...free of marketplace politics" and her new website SaintHeron.com "a home for music and cultural enthusiasts…who want to see content that really reflects the community [they] are a part of."

With her penchant for non-conformity and expressing her blackness in ways that some would call unconventional, it looks like Solange is using her new ventures to create a space where black millennials with quirky tastes in art, music, and fashion can feel at home.

As Clutch magazine pointed out, she famously shaved her head despite the messages about the desirability of long hair that often shape African-American sensibilities regarding beauty.

In 2008 she wrote "F*** the Industry (Signed Sincerely)," a candid song in which she rejected the tiresome gender and race-based archetypes carved out for black women entertainers:

Bossip, a gossip site whose readership is largely black and female, once referred to Knowles’ clique of mostly black "hipsters" as her "little weirdo crew."

Solange’s tastes and her comportment have long been outside of what’s considered socially acceptable for black girls. Like me, she’s a black weirdo, and I love her for it.

I know what it’s like to have people give me strange looks when I blast indie rock music in my car; to have other black kids scrunch up their faces as they ask me why I spoke the way I did: in unaccented English that lacked the distinctive lilt that was common in my hometown.

In high school, a kid once asked me if I got beat up when he noticed my feet weren’t cloaked in Nike sneakers or Timberland boots. He seemed sure that my bland fashion sense would’ve earned the ire of my peers at my predominantly black high school.

Solange’s unapologetic embrace of her individuality has helped me feel more comfortable in my own skin and endeared me to her as a cultural icon and artist.

It’s why I’m excited about the Saint Heron album and her new label. Saint Records might be a launching pad for other black entertainers who share Knowles non-conformist ethos. Her website could be the space that all the fly, "weird," art-obsessed black kids flock to.

With the exception of Afro-punk, Black "weirdos" like me still don’t have much media that speaks for and to us. While I do consume entertainment that’s traditionally considered the domain of African-Americans, I find that I’m starved for images and media that constructs blackness in complicated ways.

With any luck, Solange might be the beginning of a quiet revolution that transforms the way the music industry operates and the way the world understands blackness.